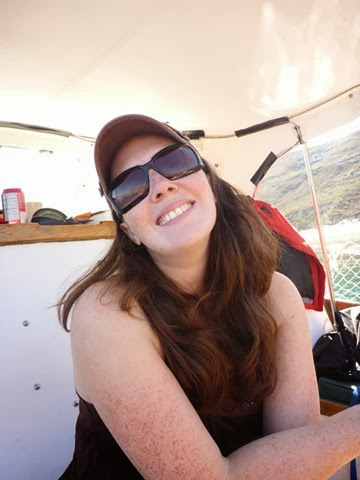 After rounding Point Conception, many sailors tuck into Cojo Anchorage, just SE of the point, and then work their way down the southern Californian coast. But we’d heard good things about Channel Island National Park and set our course straight for the nearest island in the chain, San Miguel (nearest, that is, from our direction. It’s one of the farther islands from the mainland, and is not as busy as some of the others.) We anchored in Cuyler Bay on the northeast edge of the island and rowed to shore for a quick walk on the beach. We knew the park was closed because of the government shutdown, but had read that we could walk up the beach to the ranger station without permits or a guide. 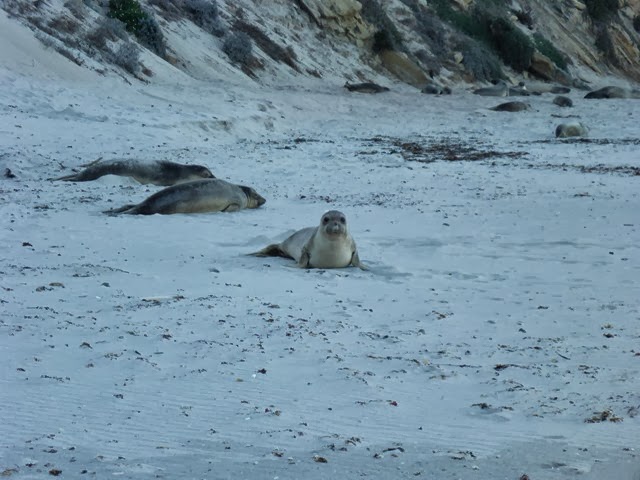 We landed the dinghy down the beach from a carpet of elephant seal pups and walked toward the dunes. Before we got very far, however, we were met by the park ranger who very kindly let us know that even the beach was closed due to the shutdown. Technically, even the anchorage was supposed to be closed, but as the rangers couldn’t tell the difference between park visitors (not allowed) and fishermen (allowed), they couldn’t keep anyone away. Also, in this remote area, the ranger was sensitive to the needs of long-distance travelers and didn’t make us move on right away. “Listen to your radio,” he said. “They’re saying the shutdown might be over this week. If it is, call me on your VHF and I’ll take you for a hike.” We didn’t know how long we could wait around for the legislature to act. We headed back to the boat, trying not to let our disappointment overshadow the beauty, savoring our few minutes on the shore. 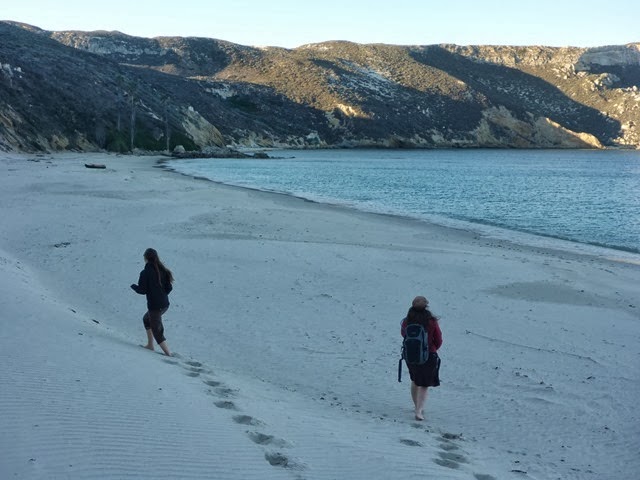 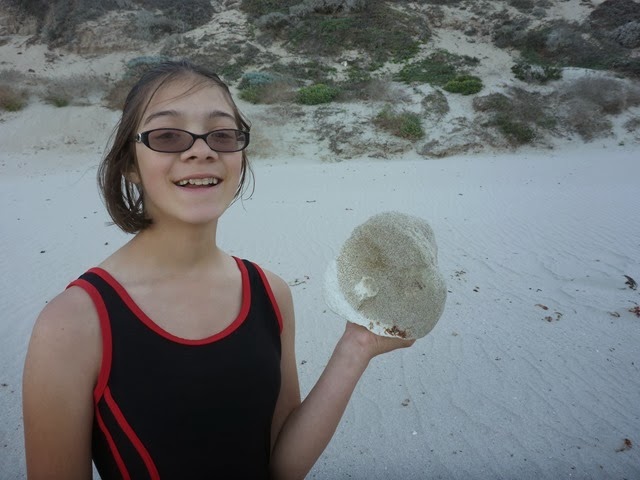 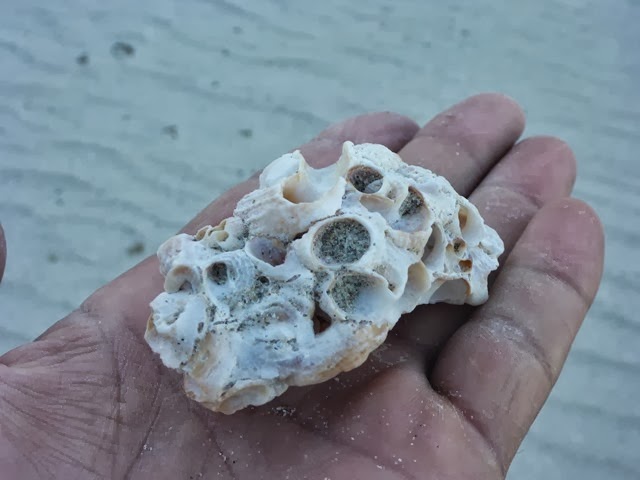 The evening wasn’t entirely wasted. We proved once again that we know how to have a good time in a small space. 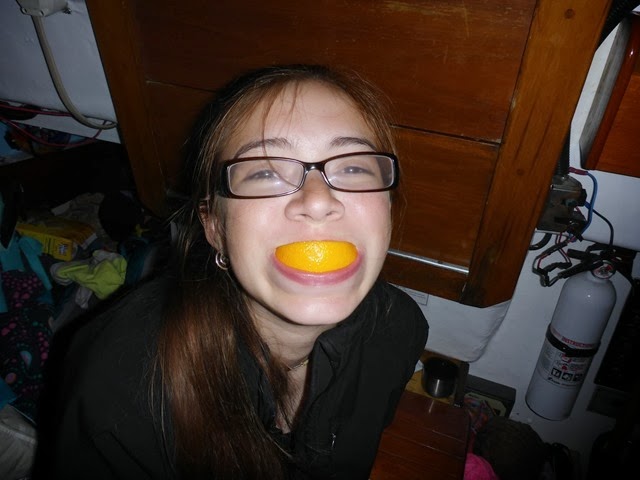 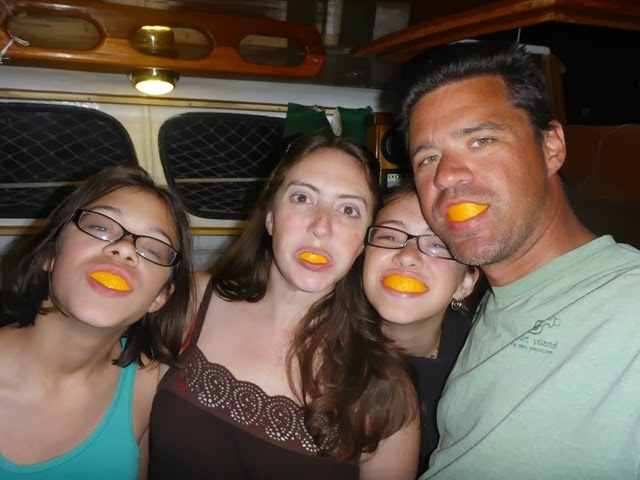 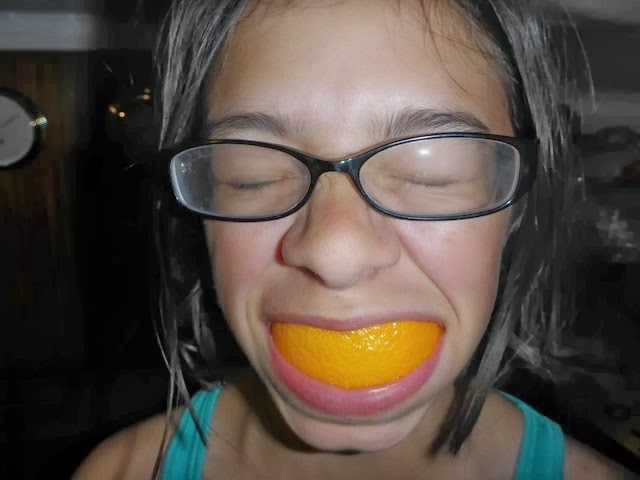 After the laughter died down, we curled up and spent some of our precious computer power on watching a caper movie together.
The next day, we had some lazing around to get to, a few boat chores, and some tidying up. It doesn’t take long to tidy the small space, but it sure gets messy again in a hurry!

By mid-afternoon, it was pretty clear we were in no mood to move on yet. In the morning, we listened to the weather, as usual, and then flipped on NPR to hear the latest about the shutdown. We had no cell service or internet access on the island, but could pick up NPR from the mainland just fine. It sounded like there was hope of an end to the drama, so every hour all evening, we listened to the news, hoping the House would pass the Senate Bill so the whole ordeal could be over. Many people were way more affected by the shutdown than we, and in much more life-changing ways, but a small round of cheering went up from our little boat when we heard the deal had been finalized.


The next morning, bright and early, we called the ranger on the VHF radio to welcome him back to work and take him up on his offer of a hike. He gave us directions to the ranger station (“Dinghy to shore, follow my footprints up the sand dune, find the hiker sign, and follow the trail up the canyon to the station.”) and suggested that we invite the sailors from the other boat in the anchorage to come along. They were happy to join us, and towed our little dinghy to the beach a little closer to the canyon. 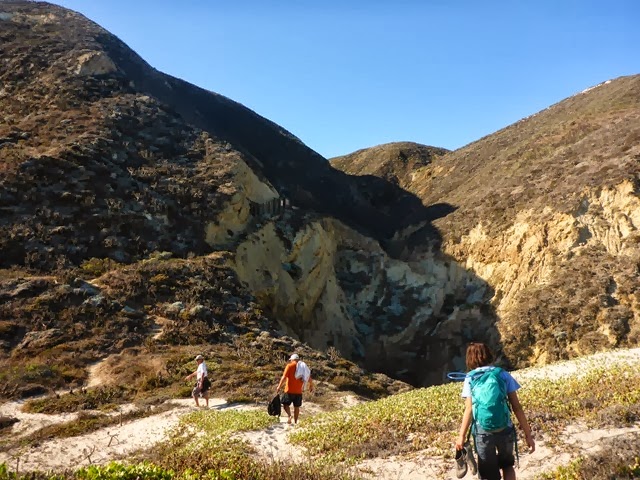 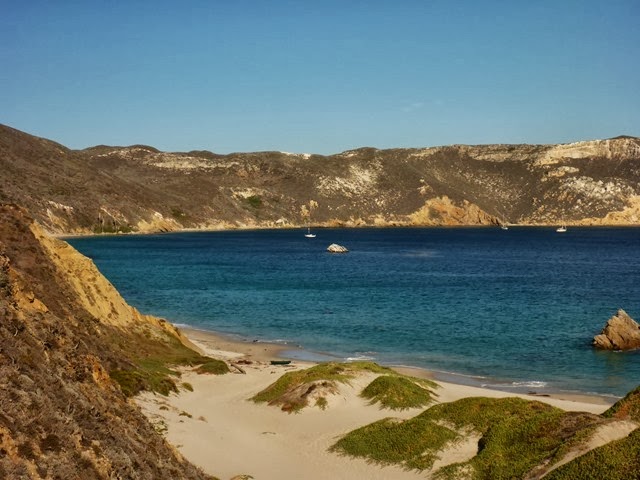 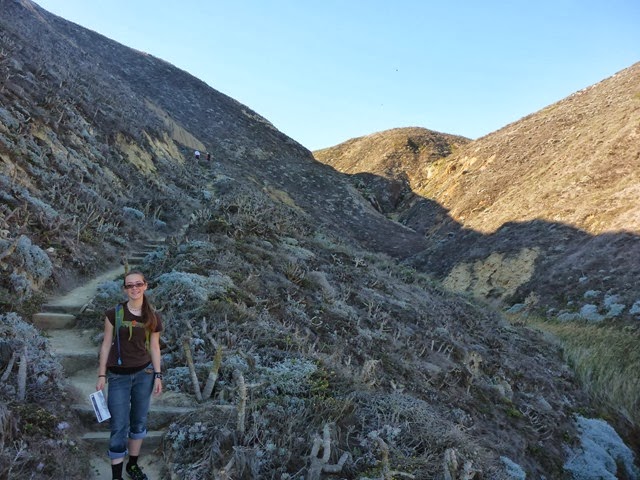 We only got turned around a bit, but eventually found our way up the steep-sided canyon. We turned down the offer of a 16-mile hike and picked a more reasonable 6-mile walk along the bluffs and out to Lester Point. From the water, the island had looked uniformly brown and bare. 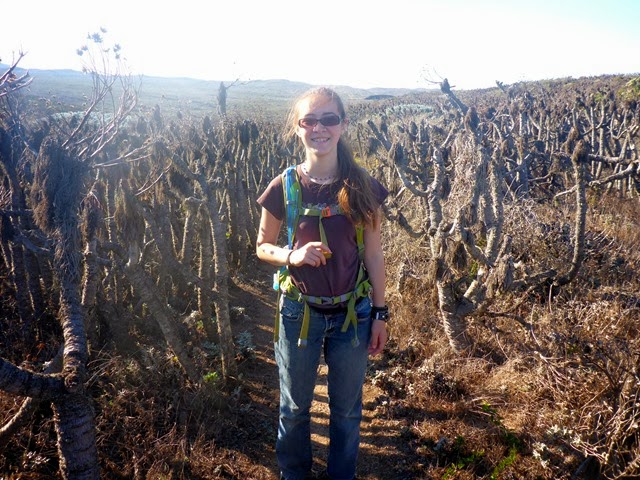 Walking over the island, through chest-high forests of Giant Coreopsis, past sites of historical importance from the ranching era, across canyons and over grassy bluffs reminded us once again not to judge the landscape at first glance. 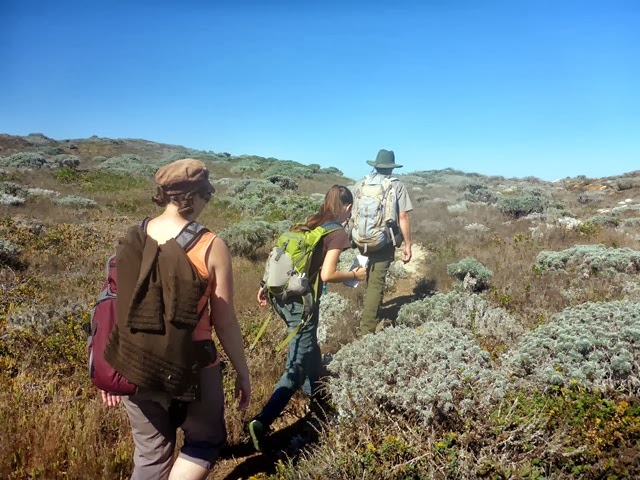 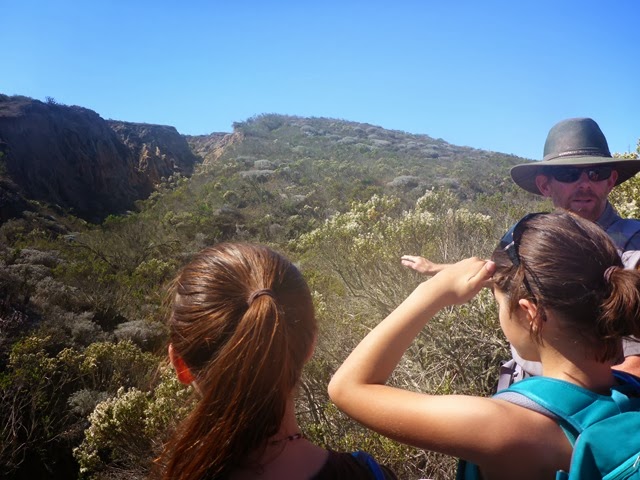 After the sheep that were ranched here in the late 1800’s and early 1900’s nearly grazed the island bare, the military began using it for training and bombing. Now under National Park Service oversight, the native plants and animals are once again thriving and the ancient archeological sites are protected. The trail followed an old Navy road across the island and, thanks to their careless street planning, right over many shell middens. As we walked near abalone and mussel shells, packaging from ancient lunchboxes of the native Chumash who occupied these islands for at least 10,000 years, we couldn’t help but imagine the similarities and differences in our lifestyles. “If you see a shell in the trail,” the ranger said, “you’re walking on history.” We decided the fox scat in the path must be current events—even that told a story. 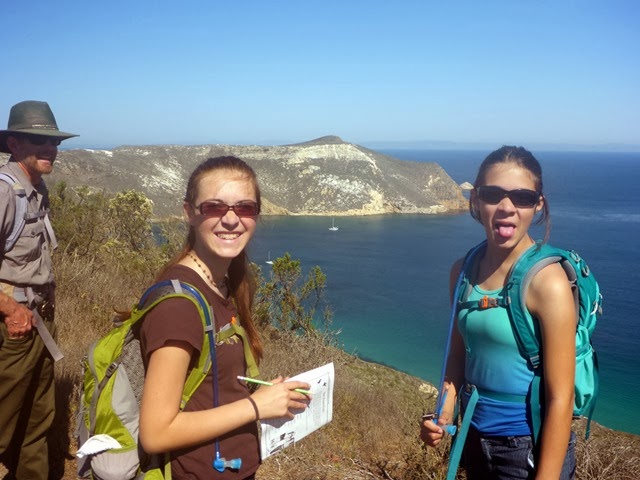 A few years ago, the native island fox population took a sudden downturn and the last of the species was brought into captivity in hopes of building the population back up again. The ranger, stationed at this remote post for the last 21 years, said that it was a sobering thing to happen on his watch and that every pile in the path is a reminder of the success of the breeding program. Later in the day, we met Andy, a fox researcher who was out tracking radio-collared foxes with a handheld antenna. He was clearly fond of his subjects and told about trying to track down the ones whose collars had switched to the “mortality signal” (2 beeps instead of 1). “Sometimes if you’re lucky,” he said, “you get a Jesus fox! When you find the mortality, he just jumps up and runs away.” 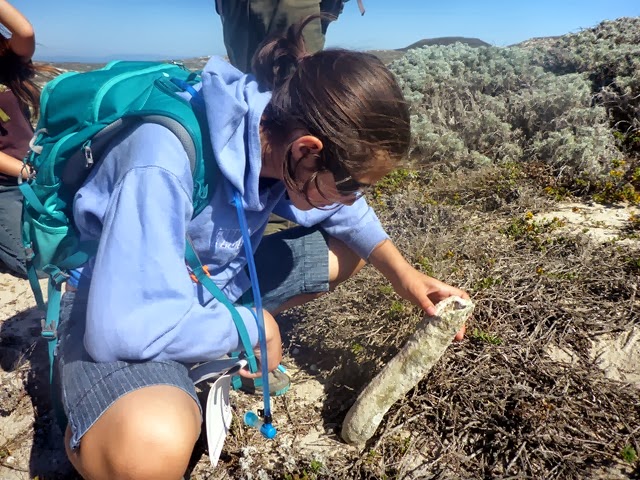 The island is also home to the Caliche Forest. We didn’t see the forest itself on our hike, but spotted several pieces of Caliche along the way. The sedimentary soil and the island’s rainfall levels create the perfect conditions for this geological formation. The acids in the rain leach out calcium from the soil, which precipitates on the trees in the area, making a casting of the trunks and roots. For Hannah, who had recently been to the Petrified Forest, this was a fascinating geological relative.

We ate our lunch in the lee of a bluff just inland of this spectacular view. 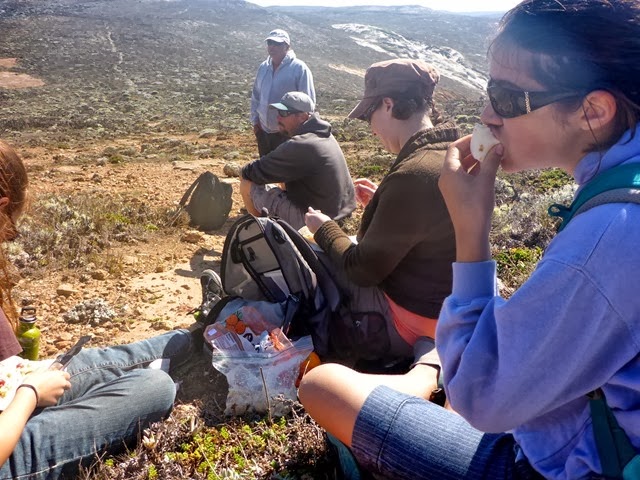 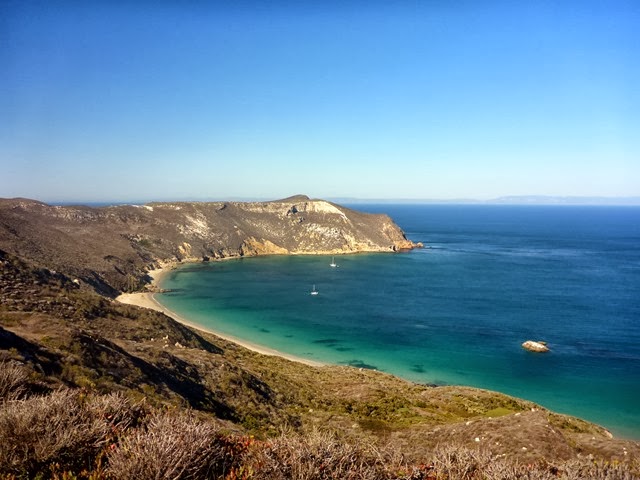 The other sailors left quickly, but we took our time on the way back, pestering the ranger with questions the whole way. “What is this plant?” “Why are these snails all dead?” “What do you eat when you’re here for a week?” “What is it like living in 2 places?” “How many people visit the island?” “How do the red abalone shells indicate the time period of the native population?” “What’s your favorite island animal?” “Why is cold ocean water more nutrient-rich than warm water?” He patiently and cheerfully answered all our inquiries and seemed to enjoy having us around to celebrate his official return to work. The girls had asked to participate in the Junior Ranger Program and had been industriously filling out the workbook all along the trail. He stopped us at the site of the original ranger station and administered the official oath of junior-ranger-ship. 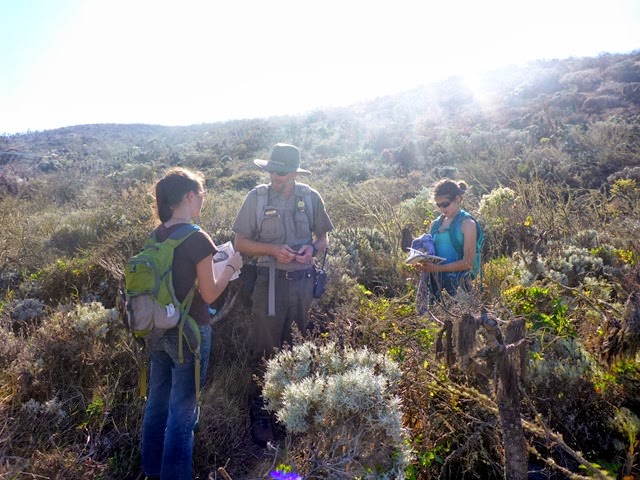 Hannah especially has enjoyed this program in many national parks, from Sitka, AK to Golden Spike National Park to this little island chain out in the Pacific, and the ranger talked with her about his path to becoming a ranger and different ways to stay involved as she grows older. We got science, history, PE, writing, and career-day all in one! 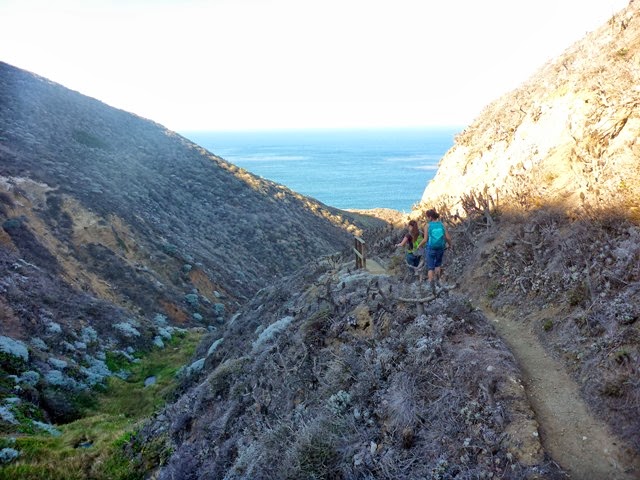 By the time we got back to our dinghy, the afternoon wind had kicked up a swell on the beach and our helpful tow had long since returned to their boat. We’d had a bit of a wet landing in the morning, and that was before there were breakers on the beach. We decided to let Bryan row the dinghy alone, out through the swell and pick us up a little ways upwind, where the swell seemed calmer for launching the dinghy with all of us aboard. He rowed hard to keep the dinghy straight into the waves and made it over one…two…and, after a quick glance back to see the biggest wave of the series breaking just behind him, through the swell line to the smooth water beyond. We hiked over a couple of rockfalls on the beach (I’d accidentally left my shoes in the dinghy, so I was hiking barefoot) and reached the other side just in time to pull the dinghy up the beach. The swells weren’t as small as they had seemed from a ways away, but we managed to get through them and back to the boat with no injuries, only stories to tell. 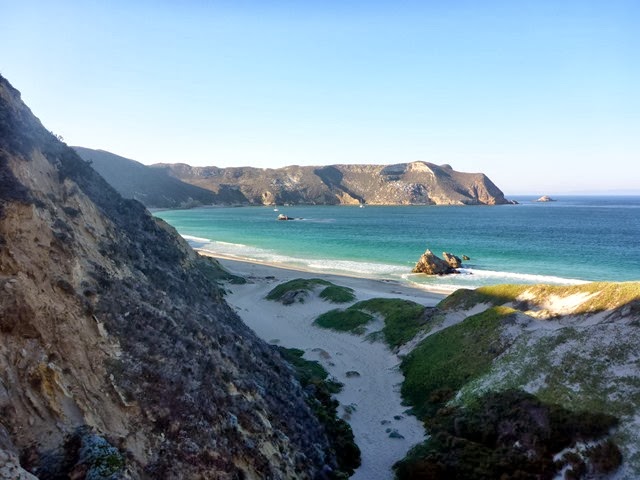