2 Days in the Bay I don’t know how we could have packed more sightseeing fun into our 2 days in SF! We hadn’t made firm plans for our time there, in case we couldn’t make it in. But we found all sorts of fun. Wednesday morning, Bryan was up early, pestering the girls out of bed and we were off to shore by 9 or so—a record for this family of night owls! 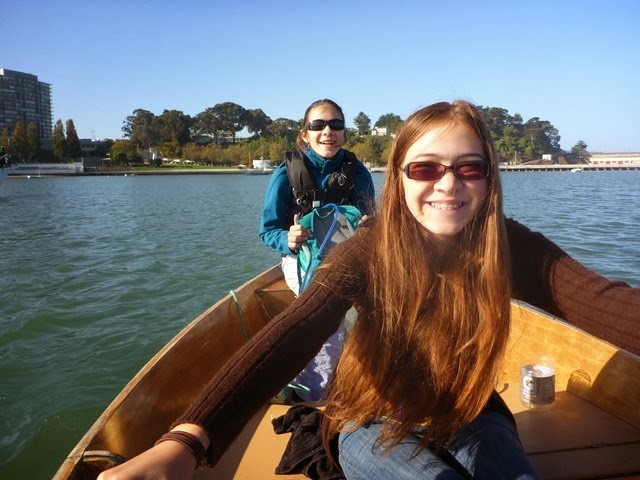 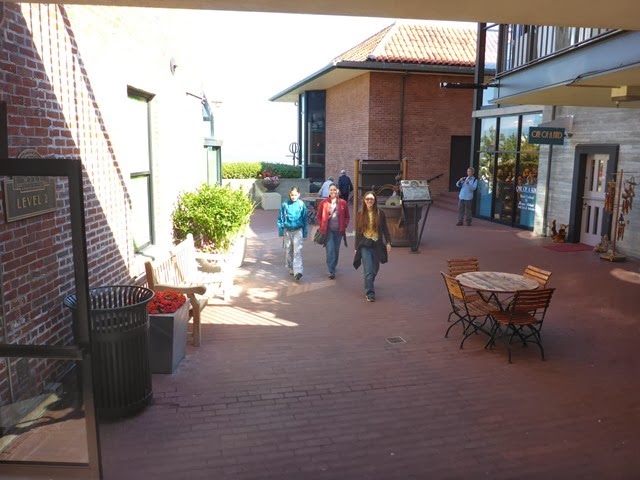 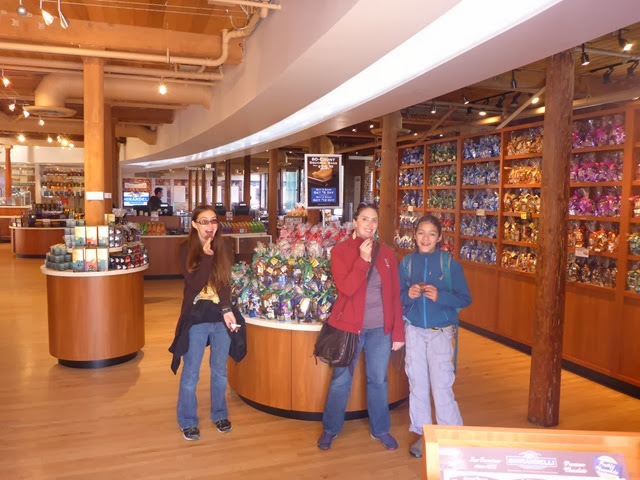 We’d been traveling along California’s “Lost Coast” for several days, with no internet access or phone service and had missed the government shutdown countdown. But we’d heard we needed a permit to anchor in Aquatic Park, our intended destination, and when we called the anchorage on our way in, we got a wry recording, offering us the option to leave a message but implying that it might be a while before we heard back.

Aquatic Park is a unique anchorage, only open to sailboats, human-powered vessels, and swimmers. Yes, swimmers. We enjoyed chatting with the few brave souls splashing by our boat through the cold water each morning.
We spotted a uniformed Park Ranger on our way in and, wondering if the shutdown was over already, asked what we needed to do to be legal. He couldn’t officially say, as he wasn’t officially supposed to be working, but the anchorage was almost empty and no one was around to enforce whatever rules we might be breaking, so we decided it was probably OK to stay a few days. We spotted the ranger several more times that day, picking up garbage and making himself useful. All political opinions aside, we respected his generous and honorable actions.
We’d heard that we should lock up our dinghy in this public area, so the first stop was at a nearby chandlery for a length of stainless cable. They had just what we needed, let us all traipse back to the back to see the cool stuff, and even offered to crimp a couple of eyelets into the ends for us.
Next we were off to find bathrooms and a bakery. Many of the public bathrooms in the area were associated with a national park or monument and were closed due to the shutdown. Our whole time in SF, we stayed attentive for non-national-park, non-private bathrooms. They’re rarer than one might think!
Beth’s bakery radar led us to one bakery, but it was new and wouldn’t be open until Friday, and some helpful locals sent us to another, so full and loud we walked in and walked right back out again. The power of google won the day with directions to a tiny European bakery with delicious pastries and enormous sandwiches. 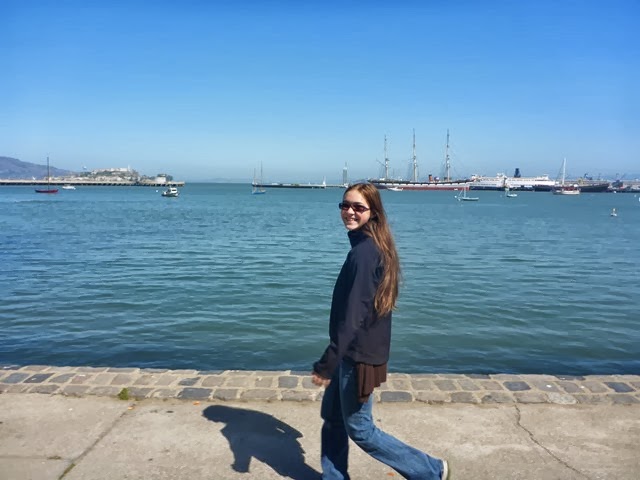 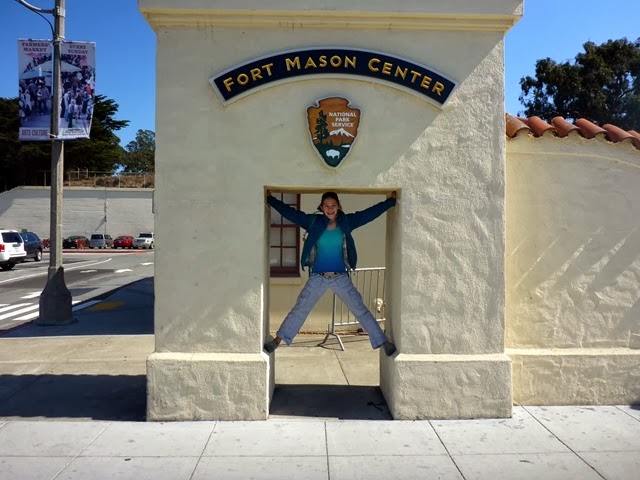 Properly fueled, we walked the 3+ miles up to the Golden Gate Bridge. We continued out on the bridge to the first arch (making the now-obligatory “I can see my house from here!” jokes along the way) and, after checking the bus schedules for the return trip, decided to walk the rest of the way across. It was strange to take in the bridge from this perspective and we spotted sailboats and a sea lion frolicking along where we’d sailed in the day before. 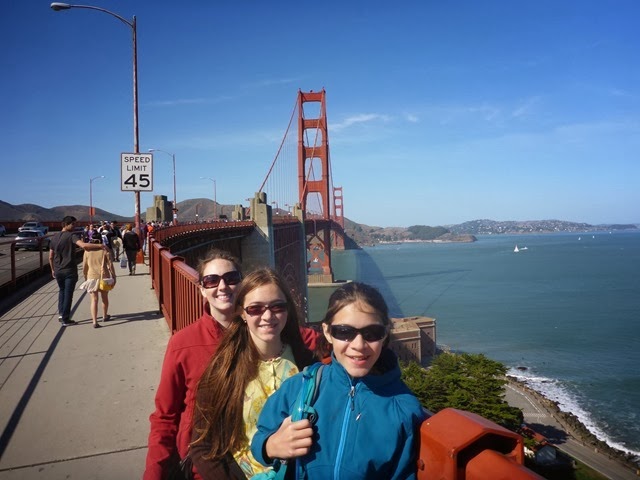 We finally made it across to the Vista House on the north side of the bridge and then zoomed back to SF by bus. Now we’d crossed the bridge by boat, by foot, and by bus! The driver asked us—twice—if we knew where we were going (we must have looked really lost!) and we decided to make a quick detour the four blocks to see the curvy part of Lombard Street before heading back down to the wharf for dinner. We almost changed our minds when we saw how steep those 4 blocks were, but we persevered. 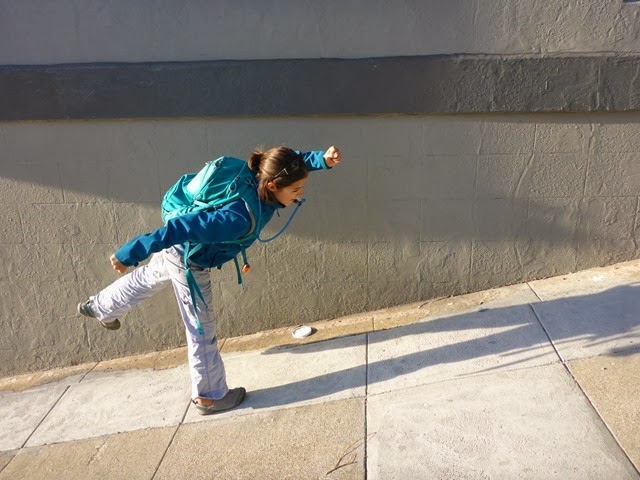 The fabulous fish and chips and the Ghirardelli Hot Fudge Sundaes made it all worth it.
After we got back to the boat, we measured our day’s walking route—9.5 miles! 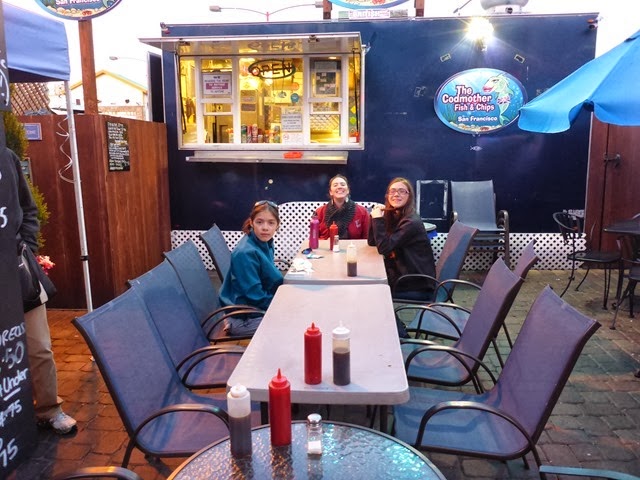 We expected to wake up sore and moving slowly, but we still felt up to another adventure. We’d decided to splurge on a traditional cable-car ride and just as we joined the line, a passerby handed us 2 extra tickets they’d accidentally purchased. 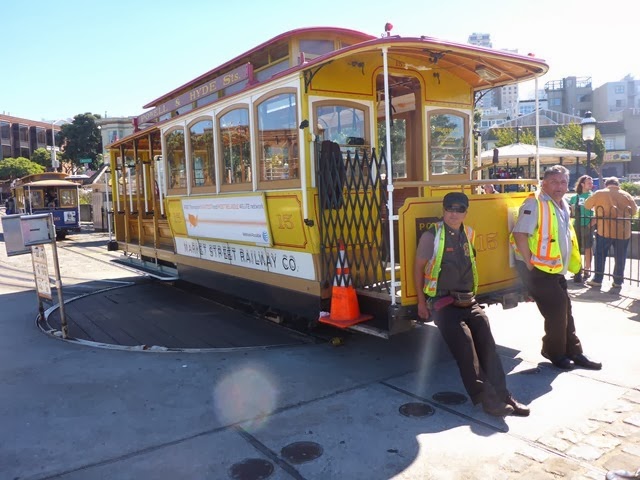 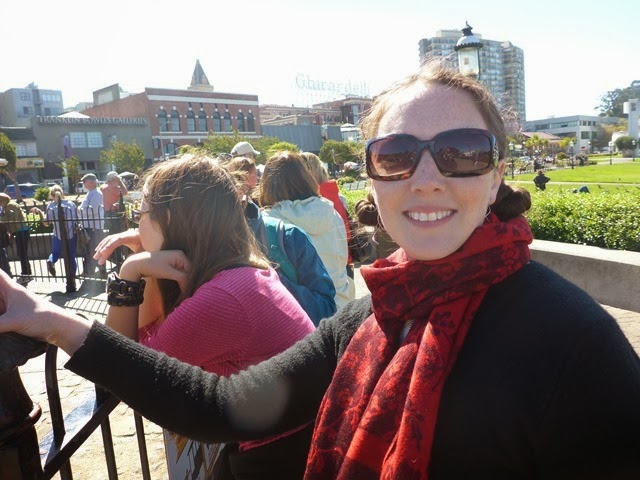 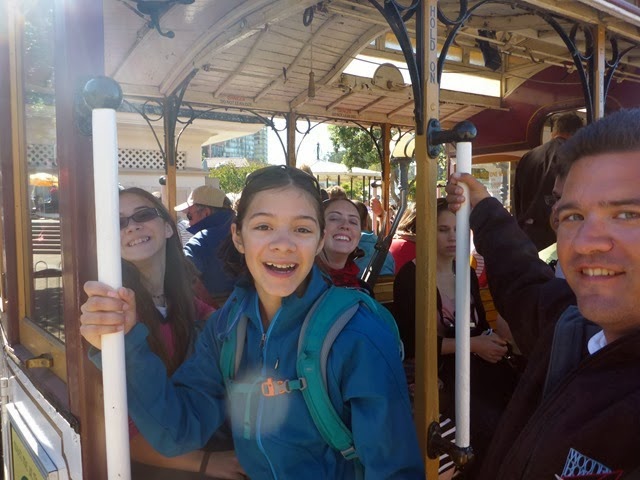 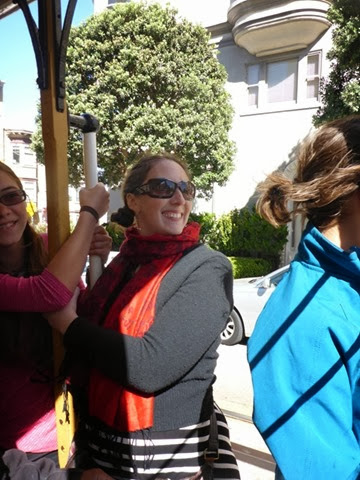 We scored primo standing spots and rode up (and down and back up again) to the cable car museum. The museum itself was interesting enough, but soon we noticed that one of the cables was stopped. There must have been an emergency issue with the cable because a team of skilled cable-workers were working as fast as they could to splice a new cable (while a khakis-clad boss looked on intently). We have done some splicing on the boat and recognized the moves, but it was amazing to see it done on such a large scale. It takes a team several hours to finish the 90-foot splice, so we didn’t stay to see it completed. 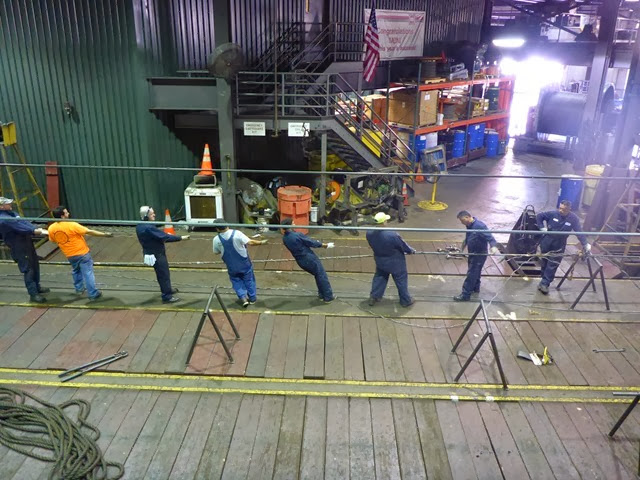 We walked on up the street to Chinatown. Before we could see it, we could smell it—all the fabulous tea shops and eateries enticing us to come in. We found our way to a dim sum restaurant and sat out on their balcony taking in the novelty with all our senses. 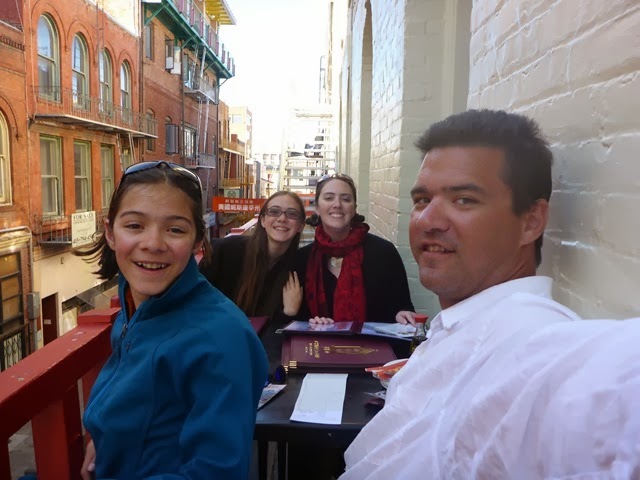 After our late lunch/early dinner, I dragged the family up Nob Hill to Grace Cathedral. They were doing construction on the magnificent front steps, so we headed in a back door and found our way up a back staircase to the sanctuary. 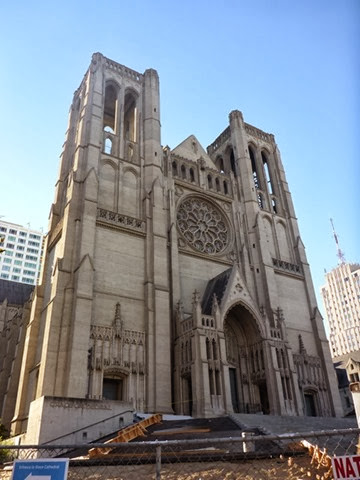 As we started up the stairs, we heard voices singing. Initially, I thought they must be piping in recorded music, but as we came out into the nave, we realized we’d walked in on Evensong. We discovered later that, though the cathedral holds an evening prayer service every day, we’d happened along on the one day of the week they include their organ and the boys’ and mens’ choir. We quietly slipped past the labyrinth, under the soaring arches, into a pew and into the presence of the holy. 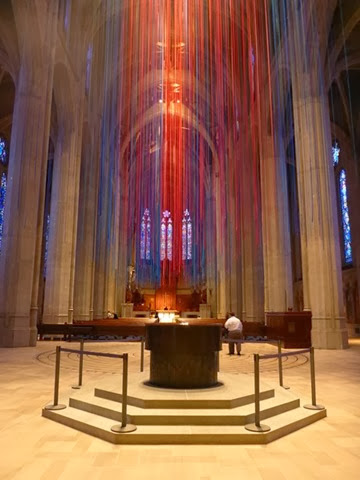 We didn’t take very many pictures in this sacred space, but please look here for some views of the cathedral with the art installation by artist-in-residence, Anne Patterson. It was just as stunningly breathtaking as it looks.
After the service was over, we walked down Nob Hill and up Telegraph Hill, past all sorts of interesting homes and unimaginable parking spaces, to Coit Tower (by this point, Hannah was calling it “Quit Tower.”) 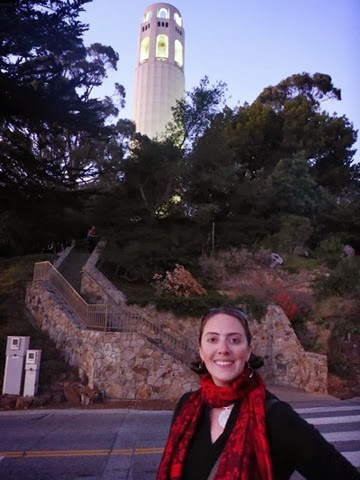 We got there just in time to enjoy the sunset view over the Bay Bridge and out past Golden Gate. 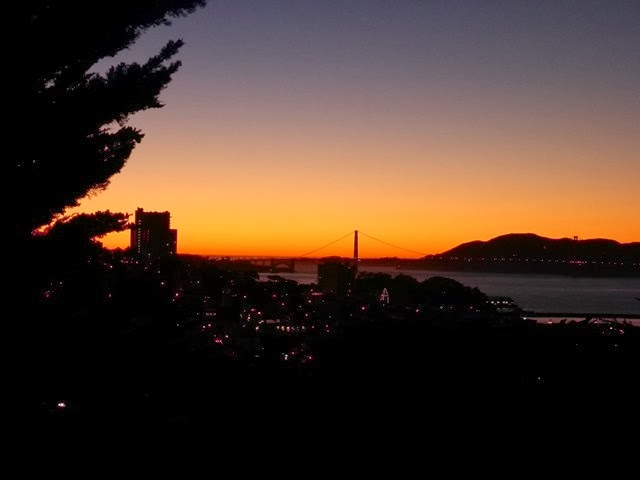 We searched all over for a bathroom and finally found an automated, self-cleaning restroom—like something right out of the future. It was cool and a little bit strange and collected quite a crowd of tourists all awkwardly waiting for a chance to use the toilet. 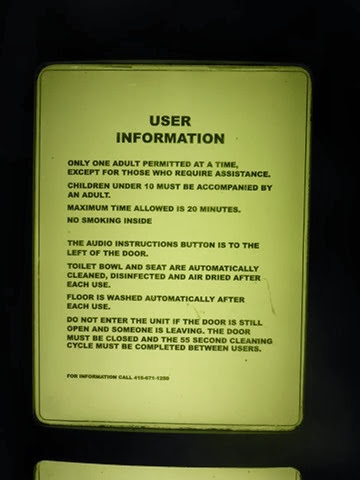 We walked back down Lombard Street toward the wharf, this time under a row of trees we’d seen the day before from the curvy hill.
We’ve been experiencing so many views from multiple perspectives on this trip, it’s not hard to imagine the same perspective shift is happening in our minds as well. I’m curious to see how those changes will emerge.

Bryan went to San Francisco for business a few years back and he was pleased to be able to take us some of the places he’d been on his own. (He was even more pleased by the sparkling-clear weather, as opposed to the grim, foggy days he’d spent here.) So we summoned all our remaining energy and walked down to Pier 39, saw the lights, rode the carousel, drooled over the food shops, and walked back to the boat, quite satisfied with our 2 full days in San Francisco. 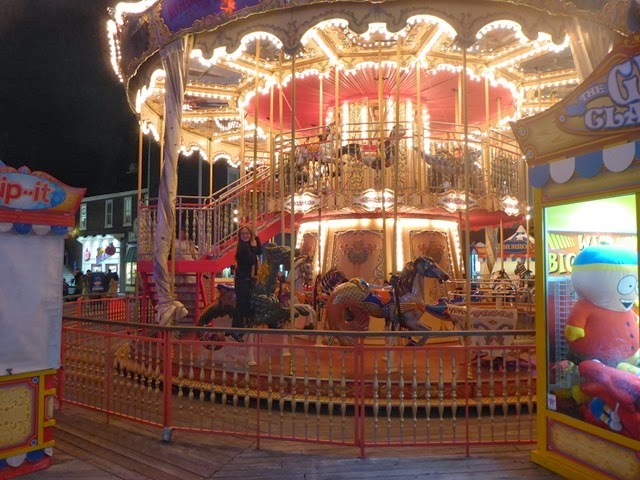