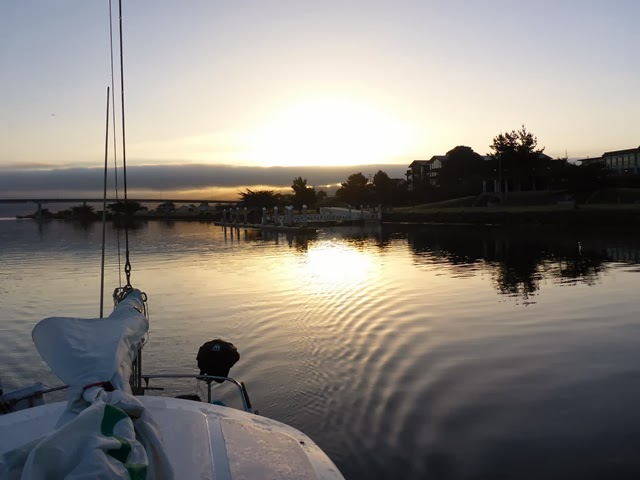 We left at sunrise (the most sailor-y time to leave) and headed out across the Humboldt Bay Bar. The swell had died down considerably from the few days before, but it was still rough going for the first couple of hours. If you were taking bets on who was going to lose her cookies first, I hope you were betting on me. Serves me right for not eating breakfast before we left. The silverware drawer must have felt similar; it took a dive and spilled all over the floor.
Before we even rounded notorious Cape Mendocino, the seas had moderated and we were enjoying another sunny day in the ocean. 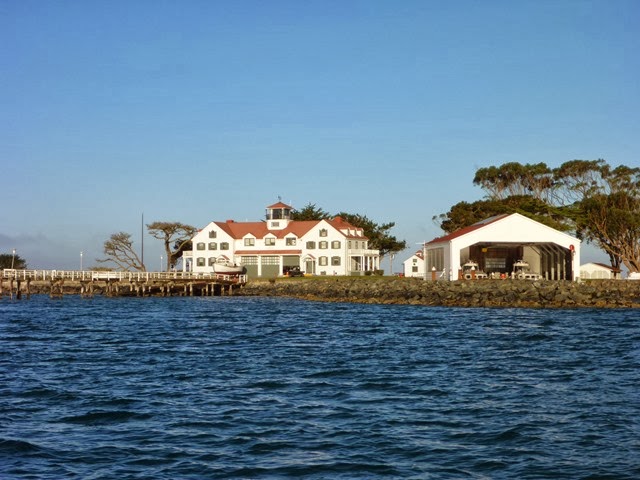 We motored through high seas and low winds, but toward afternoon the wind started to pick up and we put up first the headsail and then our reefed main. We were hoping to make it to Bodega Bay for fuel, but it was just a little farther away than we could motor. So we wanted to sail as much as possible to avoid having to stop in Fort Bragg, with its tiny, shallow entrance. Not too long later, the wind increased and we took the headsail back down and sailed under just our double-reefed main. By evening, even the double-reefed main was overpowered, but the wind, for once, was headed directly where we wanted to go. So we took down the rest of our sail and ran under bare poles for several hours. I bundled up well against the wind chill and sat in the cockpit, steering by the feel of my hair on my cheek. As long as my flyaways were blowing forward into my face, I knew I was steering in the right direction.
We made the mistake of filling our fuel tanks in the dark and spilled a little in the cockpit. We carry fuel-absorbing rags for this purpose though and I’m pretty sure the smell of gasoline on my shoes was an improvement over their previous odors.
The wind died after midnight, so we motored the rest of the night and all the next day toward Bodega Bay. But the little sailing we’d gotten in had done the trick; we had more than enough fuel to make it in! 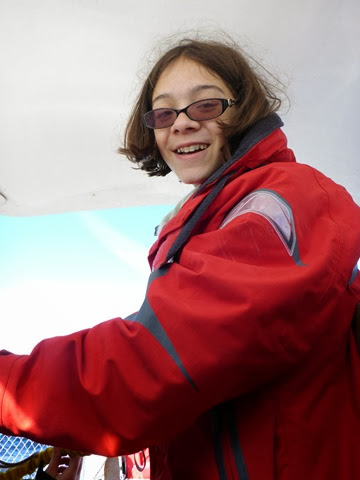 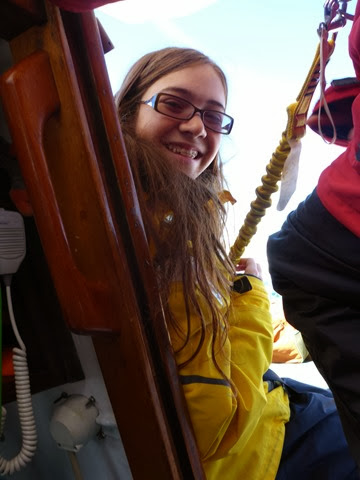 We saw a breaching whale jump and crash back into the ocean, a first for this crew, and several times found ourselves surrounded by porpoises. They love to play in the wake the boat cuts through the water and we love to watch their joyful energy.

We had hoped to make it into Bodega Bay before dark, but didn't get there until 9:00pm. The charts showed a well-marked and well-lit entrance, so we decided to head in anyway. The moon had not yet risen, but the night was clear and bright with stars and light pollution. Meira and I watched our progress on 2 different charts while Bryan picked out navigation markers from among the myriad lights on shore and we made it in just fine.
When we'd called ahead for a slip assignment, we hadn’t been able to reach anyone in the marina. So we eased our way into the inner harbor, tied up to the fuel dock, and walked over to the marina docks for clarity. It was only 10:30 or so, but the docks were quiet. We finally found a fisherman who encouraged us to pull into the slip next to him. It was obviously a private slip, with permanent fenders tied to the dock, but we figured it was unlikely anyone would kick us off in the next few hours, so we pulled in and went to bed.
In the morning, the fisherman left for the ocean. We planned to follow him soon, but before we could get over to the fuel dock, he was back. He got partway out and his engine broke down. A friend gave him a tow back, and Bryan offered him a spare part that might help. He and his friend, now stuck in port until they could make repairs, generously passed over sodas, apples, and buckets of ice they no longer needed. We said our thank-yous, filled our icebox, and headed over to the fuel dock. The attendant claimed to be a regular on “Real Housewives of Orange County” and if true, I can see why. He was quite a character!

The harbor entrance was much easier to run in the daylight, though the seals sunning themselves in just inches of water on the sandbar outside the channel made apparent how vital it had been to stay mid-channel! 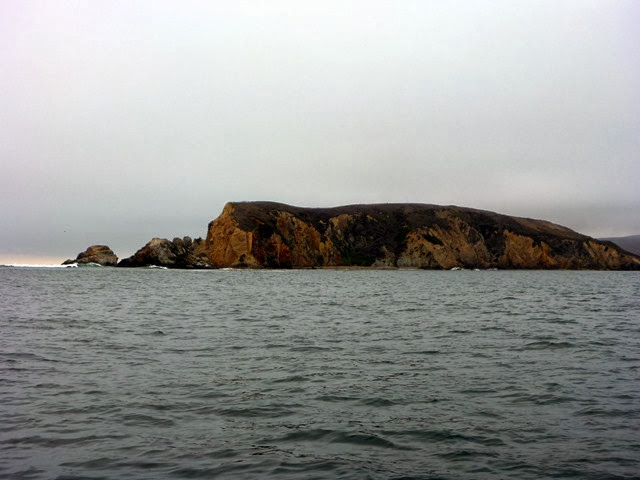 A few hours later, we pulled into Drakes Bay (yes, named for Sir Francis Drake, who may have anchored there in 1579). We found a nice spot with shelter from the south winds, not too far from another sailboat, not too far from shore. When we woke up in the morning, we could see neither sailboat or shore. The fog was so thick, we didn’t risk a row in. We wouldn’t have been able to find our way up the trail if we had!
About noon, the fog lifted enough we could see the other sailor row in. He stopped by to say “Hi” and we invited him over for dinner. He brought good wine, wasabi peas, goldfish crackers, and local knowledge about navigating the area—winning over every member of our family in one short visit. We made plans to meet up again at his place in Half-Moon Bay.
Before he left, the wind picked up out of the north, so we both re-anchored a little bit north, in the lee of some cliffs. It was still a bouncy night and by mid-morning Tuesday, we had given up on going to shore and decided to take off for San Francisco Bay instead. There were small craft advisories for high seas and rough bar, but we figured we could always come back to Drakes Bay if needed. The wind and seas would be at our back and the bar conditions seemed manageable, so we headed on down. We ended up with a fabulous few hours of sailing, some of the best of the trip.

The visibility—always a concern heading into foggy San Francisco—was amazing, and we spotted the Golden Gate Bridge from miles away. We both agreed that if the fog rolled in or conditions weren’t right, we’d just skip the bay and find our way to the sights of San Francisco by bus. We didn’t have to sail under the bridge to have a great trip. But as we neared the historic landmark, such a big part of so many sea-farers’ journeys, we couldn’t help but get excited. 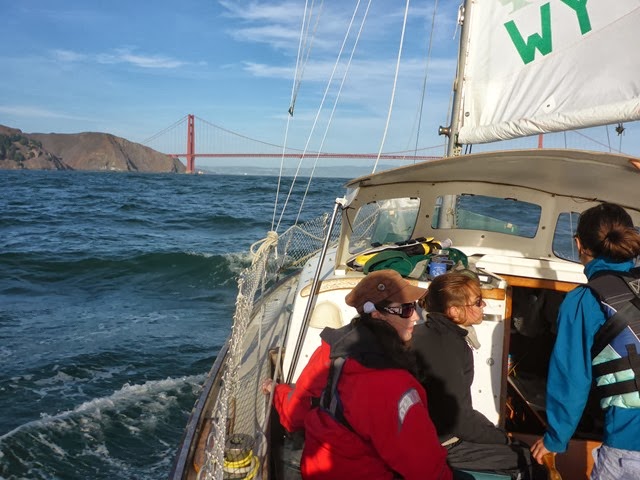 Before we turned into the Bay entrance, the girls came out into the cockpit. We wanted to experience this momentous event together. 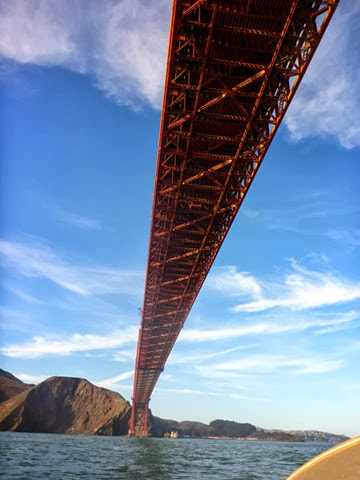 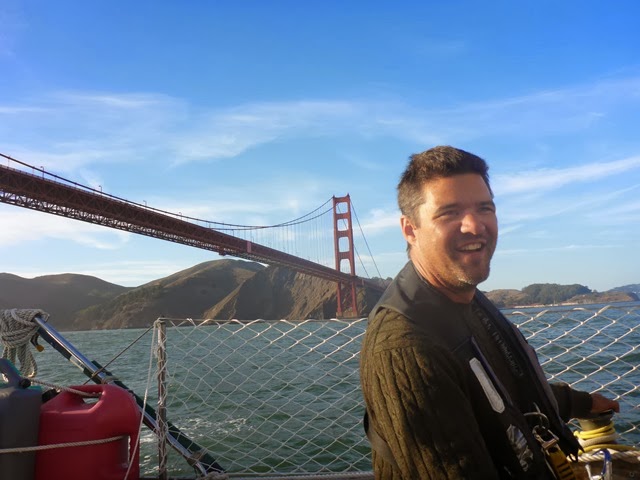 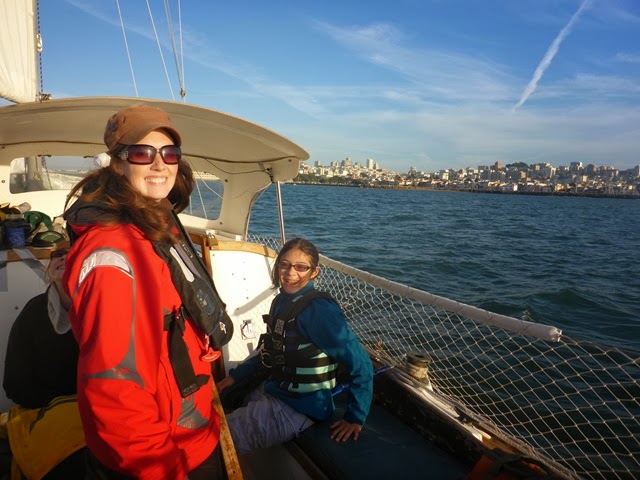 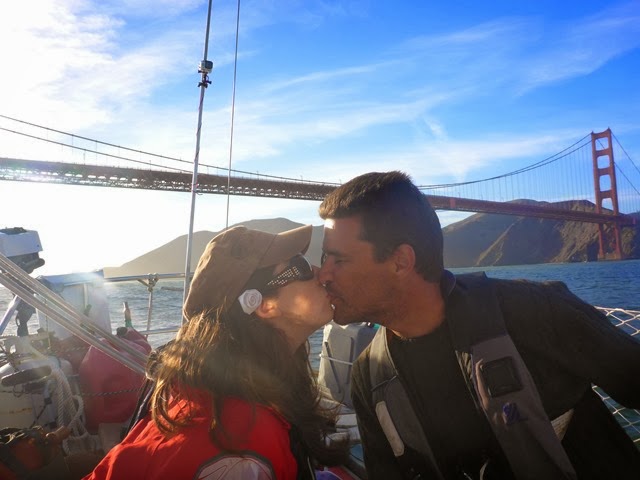 The wind calmed down a bit so we shook out a reef in the main and then took our time, everyone taking a turn at the helm, sailing in under the beautiful bridge to a surprisingly quiet downtown anchorage, just at the base of Ghirardelli Square. 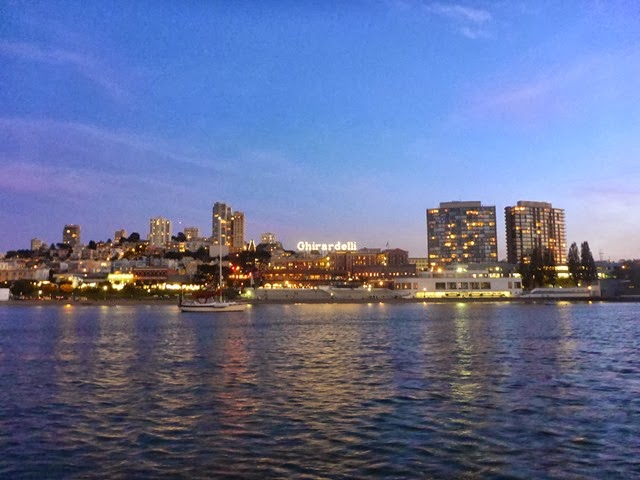 We have a long way to go yet, but there’s something about arriving in San Francisco that feels like a big accomplishment. A quick sunset row to shore, a wide-eyed walk through the bright city streets, a celebration pasta dinner—our rewards for the end of the first long leg of our journey.
Posted by Bethany at 2:18 PM