Bryan had talked about going back to Santa Rosa for a solitary hike, but decided against trying to motor back through the kelp beds again. So in the morning, we took advantage of the wind and sailed off our anchor toward Santa Cruz. 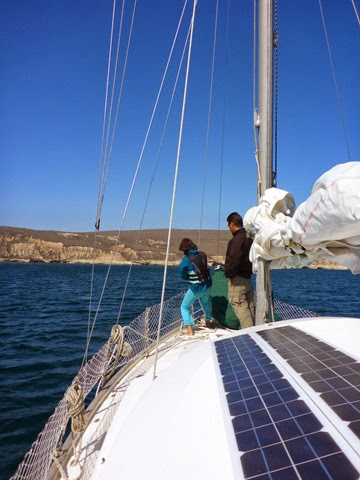 The seas were a bit choppy and our sails had a hard time staying full when we slid down into the wave troughs, but as the day went on, the seas moderated a bit and we had several hours of lovely sailing. As we approached the northwest shore of Santa Cruz, we dropped our sails and motored in close to the cliffs. We had heard this coast was home to one of the world’s largest sea caves and we wanted to see what we could see before trying to dinghy there from a nearby safe anchorage the next day.
We pulled in between the steep cliffs of Fry’s Harbor before the sun had set behind the island. Our guide book had suggested setting both bow and stern anchors and we could see why—there wasn’t enough room to swing around just one. We set our bow anchor without running into the cliffs (I didn’t think to ease the engine after reversing hard to set the bow anchor and the bounce-back bounced us a bit closer to the cliffs than I would have liked. Thankfully, they were steep-to and I think I could have pushed off from the bow before our keel hit the bottom.) and Bryan rowed the stern anchor out in the dinghy, setting it well with a cockpit winch. 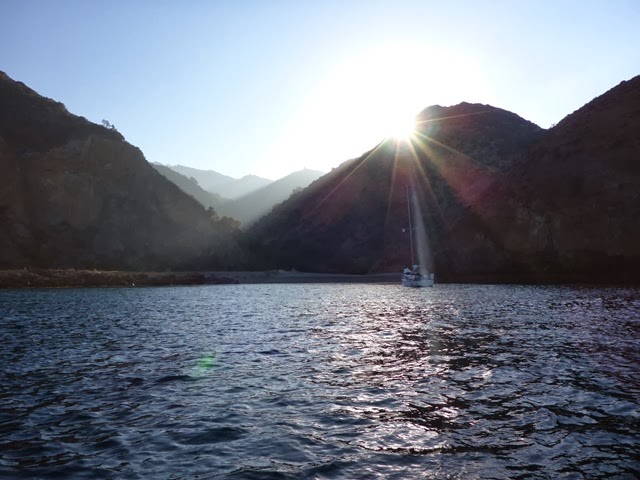 The best time to dinghy into the sea cave is morning, before the wind and swell pick up in the afternoon. So we knew we needed to leave at first light if we wanted to have a chance of getting in. And the ocean swell was predicted to rise later in the week so today was our best opportunity. Still, after several nights of interrupted sleep, morning came awfully early in our calm, protected cove. We bundled up against the chill and motored a couple of miles west to Hazard’s Anchorage, the anchorage nearest the sea cave. Here too, we set bow and stern anchors to keep us out of the swell and off the rocks. 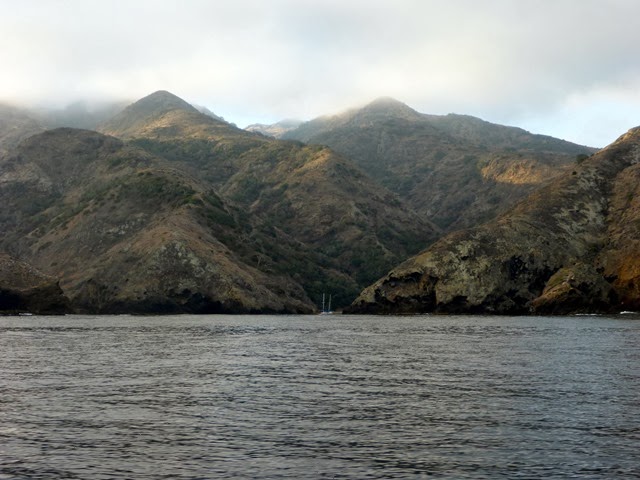 Armed with thermoses of cocoa, foulweather gear, and a handheld VHF radio, we set off in Splitpea for the cave, about 2 miles upwind. We stopped by a nearby boat to let them know what we were attempting, motored a few yards west of the bay…and rowed back again. The outboard pull-starter had been giving us trouble all morning and somehow it got stuck spinning and burned through the pull cord, killing both the engine and our plans.
Back at LiLo, we stripped off several layers in the quickly warming sunshine and pulled up both anchors, hoping the seacave was worth all this trouble. 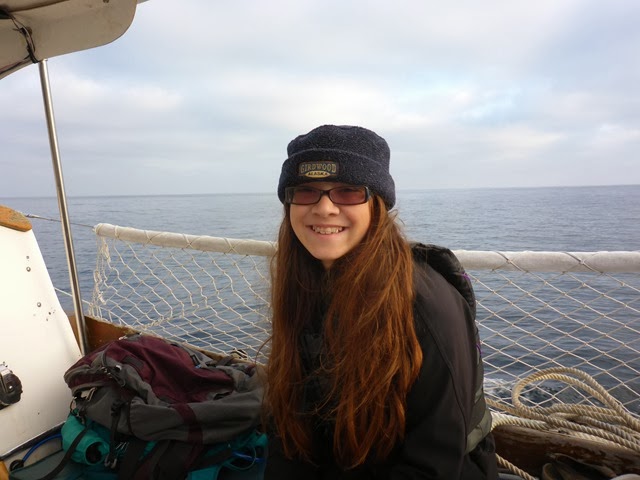 We motored to the spot we’d identified the day before and Bryan and Hannah rowed in to investigate while Meira and I motored around outside the entrance. A few minutes later, the reconnoiters were back. There were a couple of caves, yes, but nothing big enough to row inside. Though it looked like the photo in our guidebook, this could not be the right place. Before giving  up, we decided to check out a cave Bryan had spotted on the way in, just one cove east. Sure enough, when we pulled up in front of that cave, it matched the photo in our guidebook too. One gray cliff looks remarkably like another. 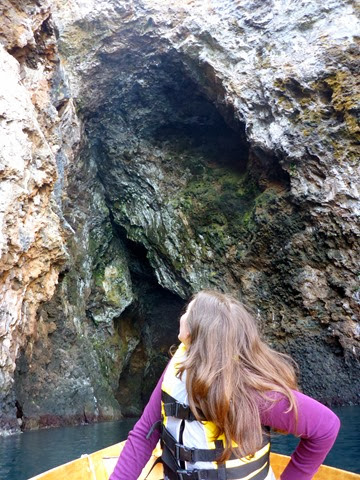 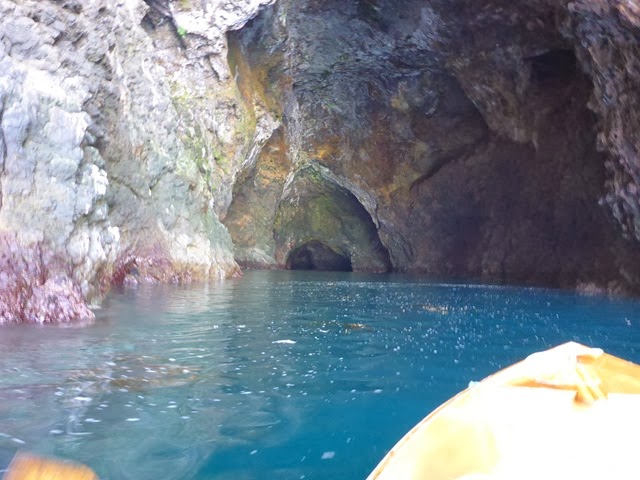 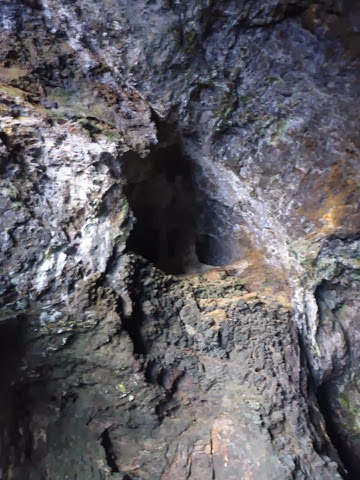 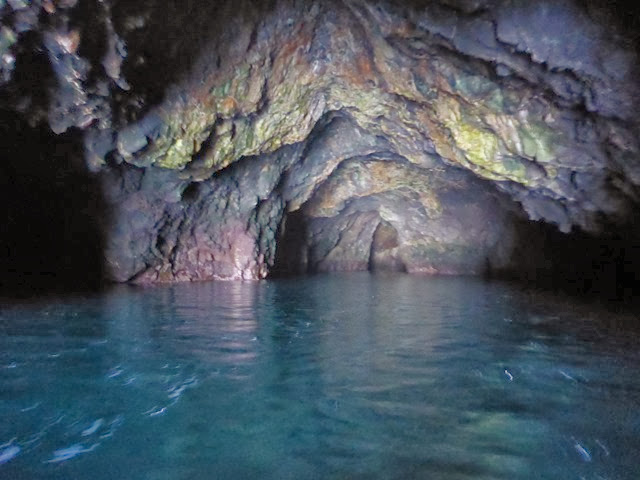 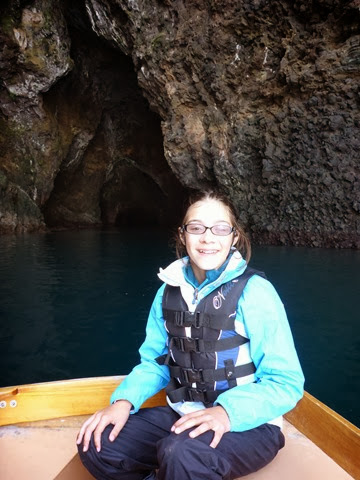 The pictures don’t do it justice, of course, and not just because it gets dark in there! Way in the way back, there’s a beach full of noisy seals and sea lions and their grunts and barks echo through the cave like a very ghostly haunted house. The swell kicks in from the back and buoys the dinghy up (and sometimes over…toward the walls) and, out near the entrance, we could see almost as well under the water as over it. I loved seeing the cave formations and sea creatures extend underwater to meet beneath us, like discovering a rainbow is actually round there under the horizon.
Later that evening, after anchoring in Prisoner’s Harbor on the northeast coast of Santa Cruz, I fulfilled a pre-trip promise to myself. Fall is my favorite season and, in our house, it’s not fall without pie. Back in Monterey, some Pippin apples (my favorite pie apple) had jumped into my bag at the market and this evening seemed like the perfect night for pie-for-dinner. Somehow in the shuffle of moving out, I lost my recipes document (culled from the many, many cookbooks I’m used to having) so I decided to trust my instincts and years of pie-baking experience and then added a little more butter. I rolled the crust out with a water bottle, manhandled it into our cast-iron skillet, and bossed the oven into submission. It’s not the prettiest pie I’ve made, but none of the pie-eaters cared one bit. On days when Bryan fixes the engine with a paperclip (almost not hyperbole) or takes a long, wet night watch to spare me, I can sometimes wonder if I’m contributing my fair share to this adventure. Homemade pie goes a long way toward balancing things out. 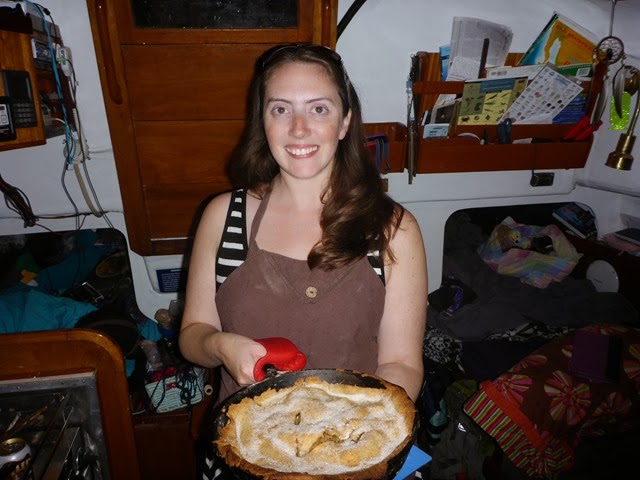 Dolphin Break! I just got called out on deck to see the latest pod of dolphins jumping around out boat. We see them almost every day now, so I won’t mention it every time. But if I haven’t said so, you should just assume we’ve probably spent at least a few minutes of each day at sea laughing in amazement as a pod of beautiful creatures stops eating for a bit and plays around our boat instead. Today, we took turns going up on the bow and watching as they slowed down to let us keep up with them (yes, we’re slow, but they’re fast!) We could see the white on their bellies and scars on their backs. Their long noses pierced the water and their dorsal fins cut through the surface tension, sharp as knives, and sent streams of bubbles arcing back over their strong tails. No picture can capture the moment. These try… 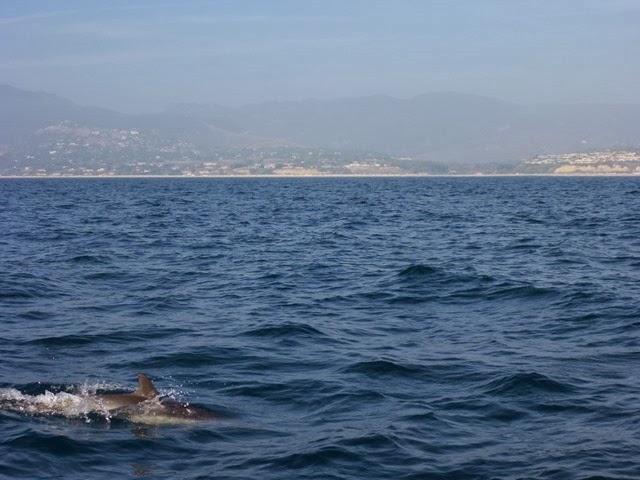 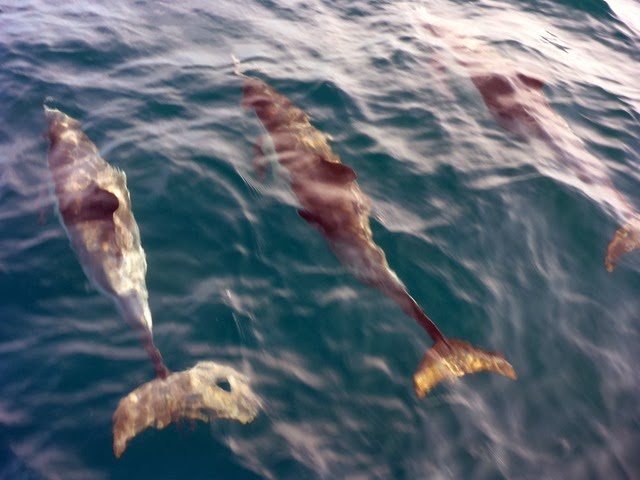 Today, when talking to a friend who knows me well, she said something like, “Listening to you talk, I realize it’s harder than you make it sound on your blog.” And that’s true, partly because you’d stop reading if I talked too much about the tedium and the anxiety. I try to be honest about the difficulties of adjusting to a sea-based, nomadic, small home and the energy necessary to make it all happen. But mostly, I trust that you can imagine the difficulty. Every life has its share of tedium and crisis, after all.
What you might not be able to imagine is why we do it anyway. So I tell you stories (and remind myself) about the good stuff mostly. It doesn’t take exotic moments of sea caves, dolphins, or pie to swing the balance back toward joy though. Yesterday, I found myself sitting on the sidewalk in front of a hardware store, waiting for Bryan to finish an errand, sharing a box of Fruit Loops with Hannah and Meira (our first cereal in 2 months and you expect it to be healthy?) at ease with the girlies, completely content. That’s worth noticing too.
Posted by Bethany at 5:48 PM