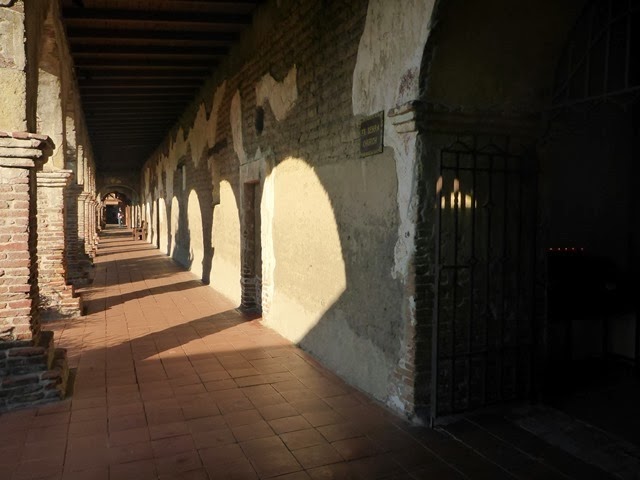 I’m sitting in the shade in San Diego on a surprisingly warm November day. We’re beginning to get the boat (and ourselves) ready for the warmer weather ahead. Here, Bryan (in a new, very short haircut—don’t get your hair cut at a military barber, that’s all we’re saying) is installing our new fan and Meira is working on getting our windscoop to stay open (a windscoop is like a tiny little sail that hangs from a halyard and funnels breezes down our forward hatch and into the cabin.) 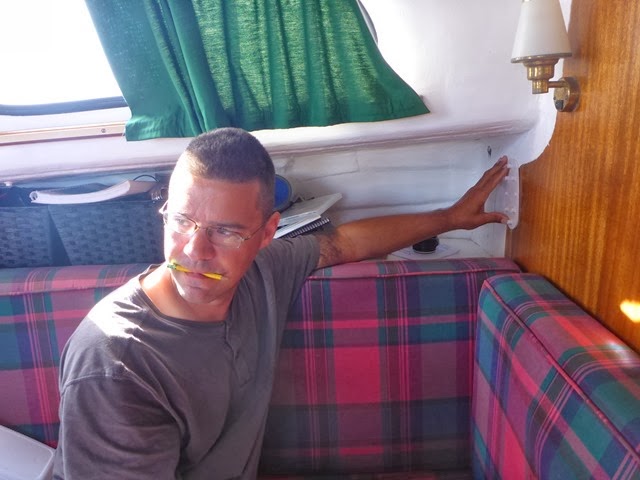 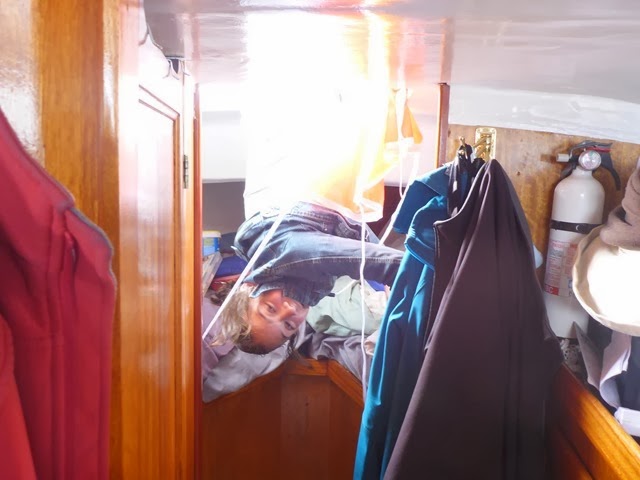 We left Catalina Island mid-morning on November 1st and immediately shook out our reefed main and raised the drifter in the light winds. We were hoping the afternoon would bring us stronger wind and it did, just a little. But the seas were calm enough we could enjoy (instead of just endure) the travel time, so we were in no hurry to get in to Dana Point. We sailed wing-and-wing in the west wind for several hours. About sunset, the wind died and we started the engine. Before we could get the sails down though, the wind filled in again from the north and we turned the engine back off and eked out another few minutes of peaceful travel. 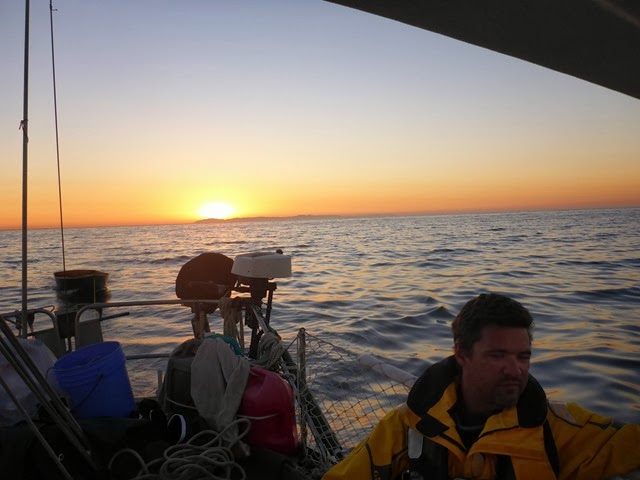 Bryan took the last watch, bringing us in to Dana Point with the help of the myriad navigation lights marking the channel. I’m sure the anchorage areas fill up in the summer, but this day, we were one of just 2 or 3 boats behind the jetty.

Back when the trip was still in the planning stages, I had looked up information about this stop. My family visited many of the Californian missions on a childhood trip to the area, but the mission at San Juan Capistrano was the most memorable and I wanted to take the girls there if we could pull it off. We rowed to shore, found a safe place to tie up the dinghy, and walked a mile and a half to the bus stop. We found an ATM, got some cash and bought a couple of cold drinks so we would have change for bus fare. We counted stops and watched for unfamiliar landmarks and got off the bus at just the right place.


In my online research, I’d found a coupon for a free guided tour of the mission. We arrived with an hour to walk around first and we thoroughly enjoyed the beauty of the gardens and the grounds.

At 2:00, our tour guide met us and took us on a fascinating tour through the history of the mission area. Her passion for the subject was contagious and when the tour was over, the girls went back to some of the historical displays for more information. We stuck around until our hungry bellies could take no more and then reluctantly tore ourselves away. 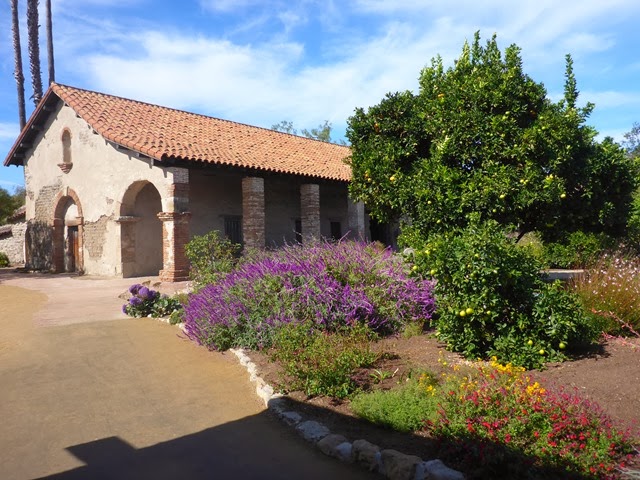 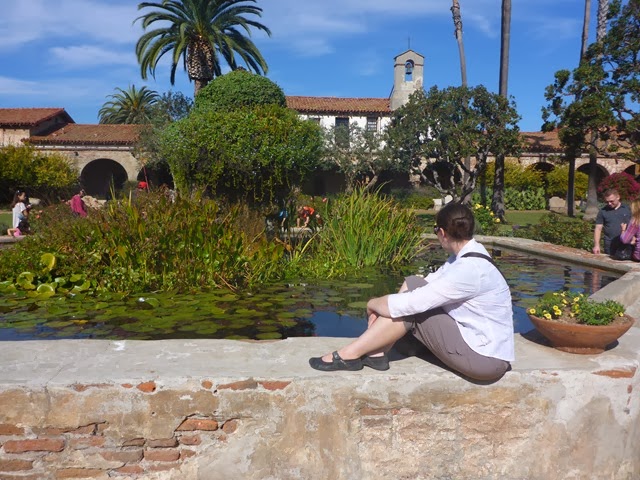 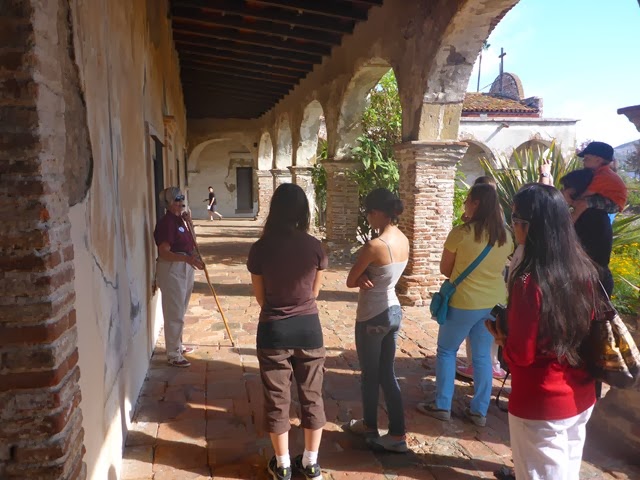 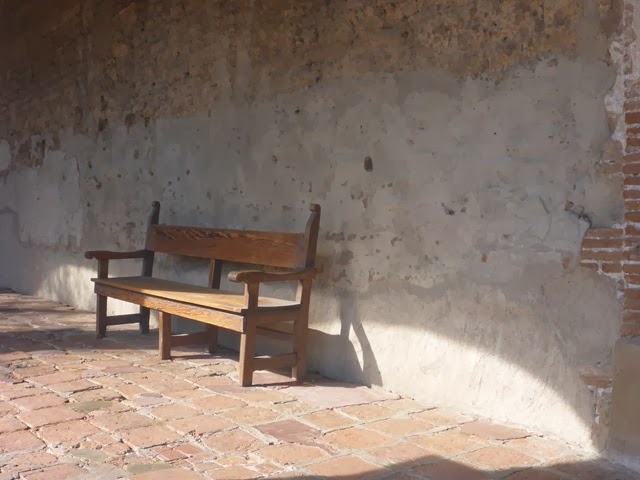 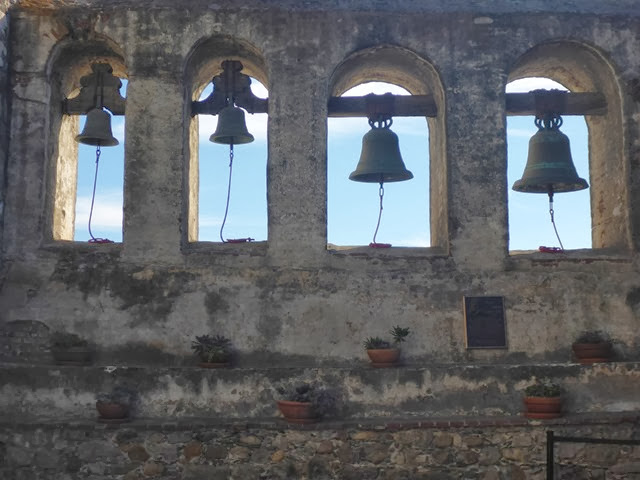 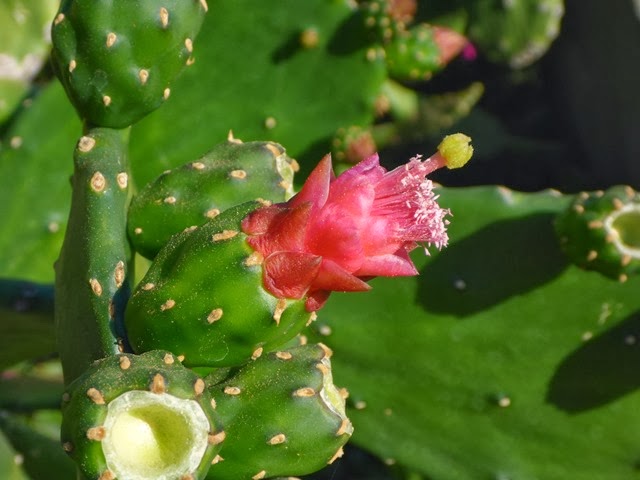 We walked around the corner to a church that had been built in the “spirit and form” of the original stone church in the mission (destroyed by an earthquake in the 1800s) We peeked in to get an idea of what the original might have looked like. A church service was just beginning, and we felt a little bit bad about not staying. But we were soooooo hungry! (We’d gotten pretty low on portable food and hadn’t packed a lunch. Have I said how hungry we were?) We felt a little better about it when we saw the sign on the way out—the service would be conducted in Spanish. I’m pretty sure we’ll have more opportunities to join in on a Spanish worship service. 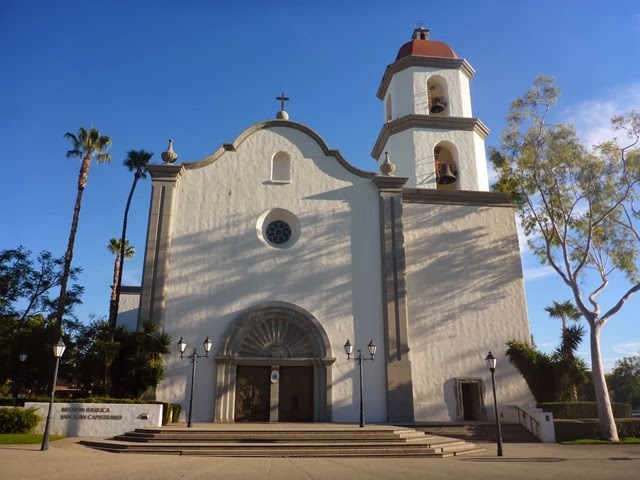 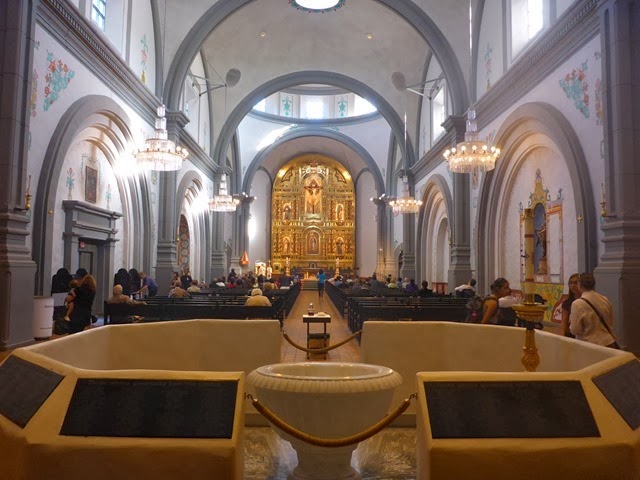 While on the tour, Bryan happened to glance across the street and he saw what he though were lemon trees in a vacant construction lot. So on our way to find dinner, we took a quick detour. We made our way over to the empty lot and found several oranges trees, full and dropping fruit everywhere. What had fallen was just rotting on the ground; clearly no one would care if we took a few. We ate a couple on the spot—so fresh and juicy—and took a few back to the boat, grateful for the bounty. 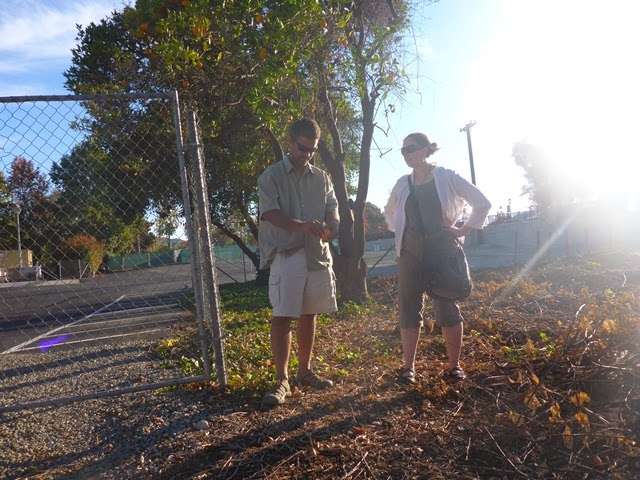 We grabbed a quick dinner and found our way back to the bus stop, back to the other bus stop, back to the dinghy dock, back to the boat, taking turns carrying our pilfered oranges on the way. That evening,, Bryan and I decided to take a walk to the top of Dana point, named for the Dana who wrote Two Years Before the Mast. He came through here on a ship transporting cattle hides—an industry began in the years of the Spanish mission—and tells stories of tossing the skins down from the top of this cliff to the crew on the beach below. Apparently, at one point, he was lowered down over the cliff on halyards to loosen the hides that had gotten stuck on the way down. The view from above is very different now, but spectacular still. We snagged coffee and internet access in this year’s date-night tradition, staring at our own devices, downloading in a hurry with not a lot to say that hadn’t already been said in the 23 other hours we’d spent together that day. We returned the next morning and Bryan finished up some work while I found my way to a local yoga class. 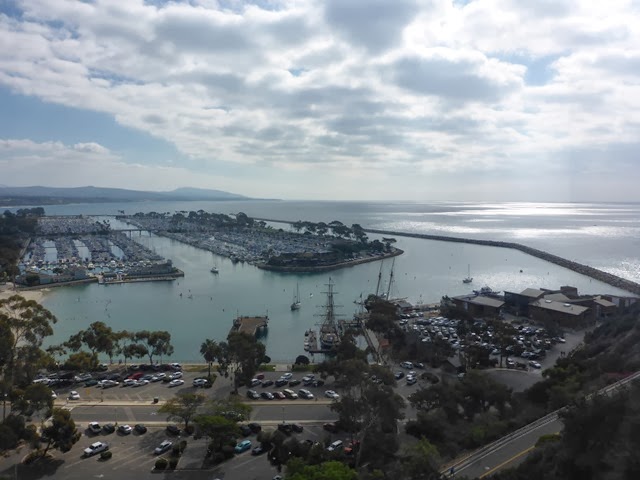 Life aboard offers so many opportunities to problem solve, hardly any activity is straightforward and I find it hard to break the habit. One day, while walking up to a fast food restaurant, I started trying to figure out how we would buy a taco, since we didn’t have a car to go through the drive-in, momentarily forgetting that we could just walk right in. And I laughed at myself when the same day, with rare steady internet access, I was trying to write a blog post on my computer without the offline blog editor I’ve been using on Bryan’s laptop. I briefly forgot I could just write a post online, the way it always used to work. 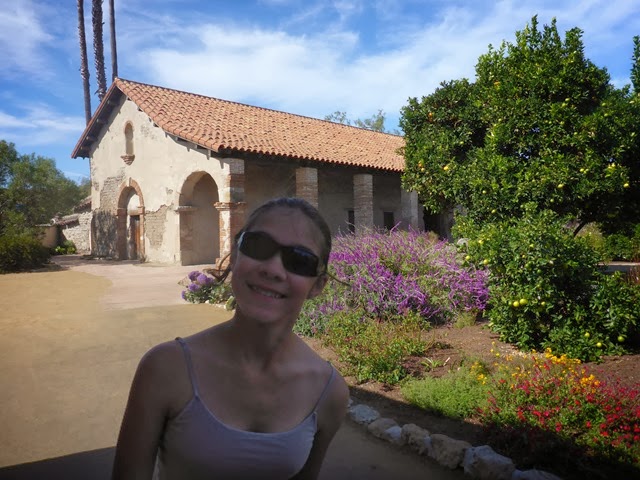 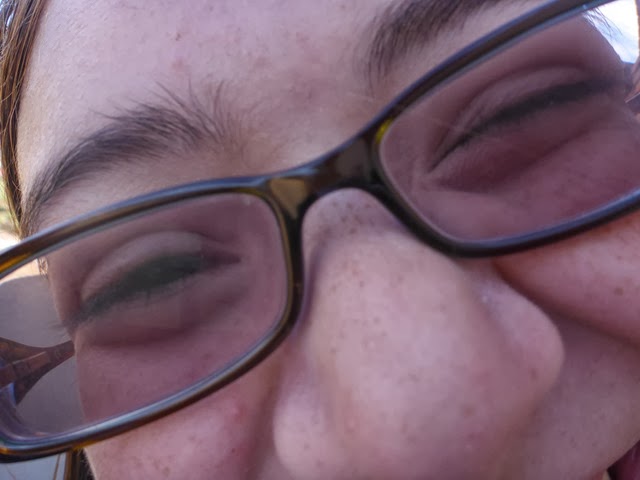 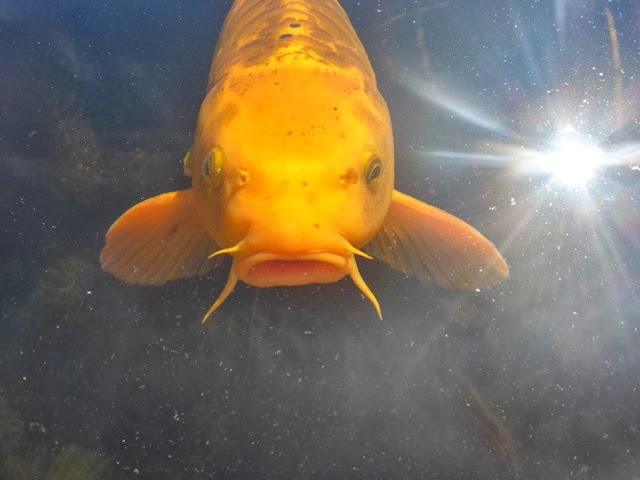 I felt a little vindicated in my brain’s attempt to constantly problem solve, though, that afternoon when we got back to the dinghy dock. The ramp was at such a steep angle, I considered climbing it backwards, like a ladder. We managed to to walk down sideways, holding on to the rails. But it was a reminder of the challenges of living in this fluid world of boat travel. 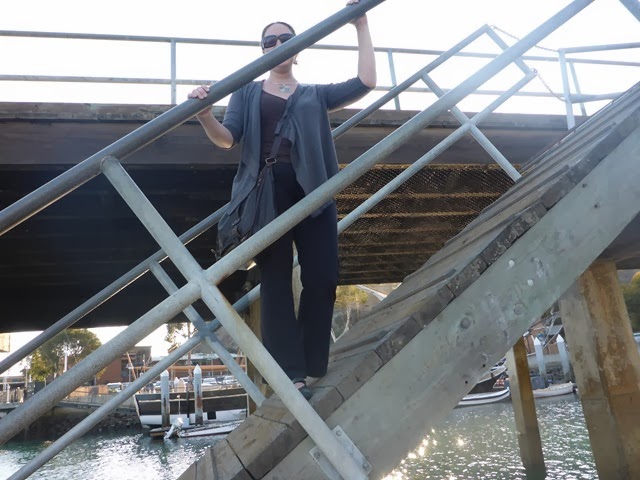