I owe you a story 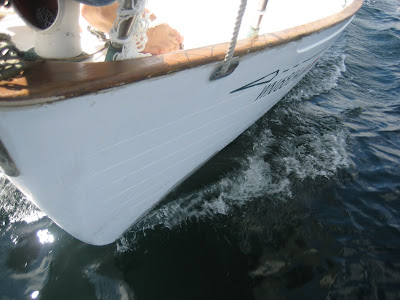 I'm finally done pulling together pictures from our latest sailing trip for a My Publisher book (oh, how I love online scrapbooking) and I thought maybe I should fill you in as well. Last Christmas, flush with new-boat feelings, we gave our parents a certificate for a 3 day trip aboard. And yes...we heard all the jokes about a 3 hour tour. With Bryan's grandpa so ill this year, we're not sure when his mom will be able to redeem her trip, but we took my parents out over Memorial Day weekend. We all took off early on Friday afternoon to beat the rush out of town. Perhaps we thought that 3 days together on the boat wouldn't be enough "family closeness" so we piled into Mom and Dad's van and drove to Olympia.

We've heard many sailors say that guests come to your boat for a taste of life aboard, so you should try to keep your plans as normal as possible. So we started our trip, as usual, with a trip to the grocery store. And after a stop for late-night Chinese food, we made up all possible bunks and do-si-doed our way around the cabin and into bed.
"Do you smell that too?" is an awful way to be awakened, but the smell itself was even worse and it had awakened our guests first in the middle of the night. They, being new to boating, didn't know to be alarmed and slept-ish the rest of the night with lotioned hands tucked firmly under noses.
A bit of inspection and the tightening of a few ring clamps later, the leaky holding tank was mollified and we were off to the farmer's market. The Olympia Farmer's Market is just a few steps across the parking lot from our marina and a perfect place to pick up some breakfast and people watch. And it was Meira's birthday, so there were presents to open and a stop at the toy store to spend birthday money. It was maybe 11:30 when we finally pulled out of our slip and breathed a sigh of relief. We're on our way!
But we sighed too soon. About 5 minutes out, while still in the middle of the channel, the engine quit. This time, we knew we had fuel (as opposed to last time, when we discovered--not 30 seconds after checking--just how far down the dipstick/fuel gauge means "empty." That time, also in the middle of the Olympia channel, required some tricky sailing and a frantic refill from the spare fuel tank.) So we pulled open the engine compartment and pumped the priming bulb in hopes of a simple solution. And it worked! For about a minute. And then the engine died again. So we pumped the bulb again and fired up the engine again and everything was good again...for about a minute. We repeated this process (to the accompaniment of an ongoing trouble-shooting conversation between Dad and Bryan) about 20 times until we made it to the turn in the channel and could put up the sails. It seemed unlikely that we would get back to our slip safely with such a fluky engine, so we decided to settle in and enjoy the adventure. ("We told you we'd show you what a real sailing trip is like!")
We sailed for an hour or two in the fading wind, but after tacking back and forth in front of the Dofflemeyer Point lighthouse for 45 minutes or so, we decided we needed another option. We'd planned on Jarrell Cove for the first night. The marina there has fuel and a pump-out, both very important items. But it was going to be at least 2 hours of motoring and by this point, we were pretty sure we had a dead fuel pump. Dad and Bryan agreed to take turns manually pumping the gas into the engine and steering and we all voted to go for it.
The trip went surprisingly well; we caught a current and got up to the cove in less than 2 hours. It was noisy, of course, with the engine compartment open and tedious for the pumper standing over the hot engine. But Mom and Dad were determined to have a good time, so we all relaxed a bit. 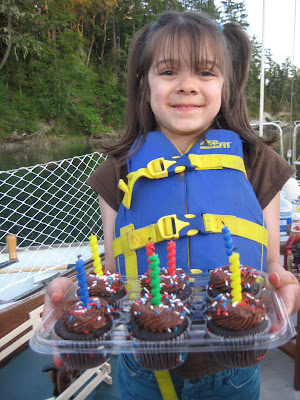 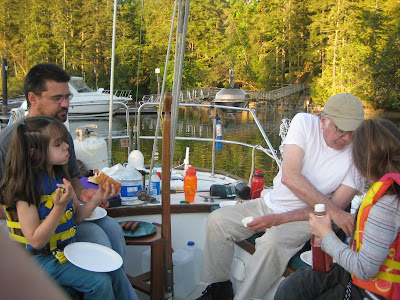 Jarrell Cove is beautiful, shady and green...and popular. But we found a mooring buoy and managed to catch it on the first try even with all the heckling spectators. The evening more than made up for our difficult day. We barbecued hot dogs, following a family tradition of dropping the lid handle overboard (see the picture for our temporary fix), and had birthday cupcakes. There was bubble making...and the inevitable bubble soap spill. We all enjoyed seeing a sleek runabout pull up to the dock and, with a bit of sleight of hand, convert into a cozy cabin cruiser. And just at sunset, someone stepped out onto their bow and played "Taps" to end the day. 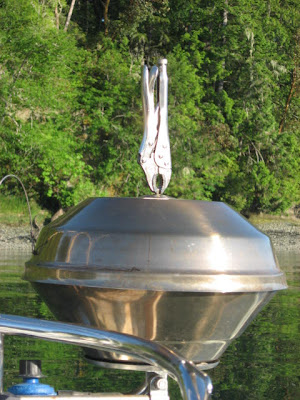 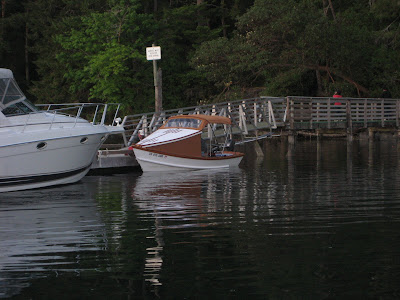 The next morning, we moved to a spot on the dock and ate breakfast while we watched a heron reclaim our buoy. After a short walk on shore, we were ready to take off. At some point during the evening, the guys had decided to try replacing the fuel filter. We hadn't thought it could possibly be clogged up yet, but then we remembered running the fuel tank down to the dregs. And we just happened to have an extra filter on board from the time Bryan dropped a piece of the filtering system overboard and had to buy a new one. The frustration of that day was redeemed by saving us today!
A quick stop for fuel, and we were off again, engine putting smoothly this time. We let it run just long enough to prove its reliability and then we put up the sails. We heard later that it rained almost all weekend back home, but we couldn't have ordered better weather. We had just enough wind to sail comfortably to Joemma Beach and my parents loved taking turns at the helm, especially Dad, who did 4 years in the Navy during Vietnam. 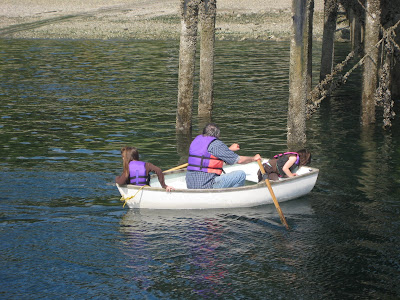 We arrived at the beach at a very low tide and Dad tossed the girls into the dinghy and rowed over for tide pool exploring. Eventually, Bryan and I joined them while Mom relaxed in the cockpit and watched the birds (later determined to be Purple Martins) in the nesting boxes on the pier. Hannah and Meira wangled their way into borrowed fishing poles and quickly caught (and released) several small fish. 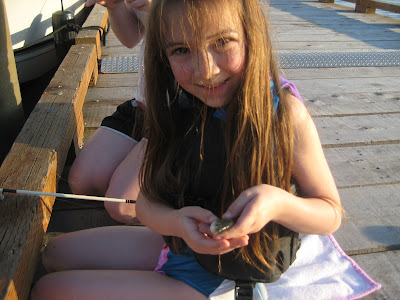 We converged back on the boat, wet and sandy, to evening feeding time. The birds sang love songs and flew figure eights around the marina. The air smelled sweet as I zested limes and diced peppers for a Thai chicken dinner. Thousands of tiny, silver herring danced around the docks, shattering the top of their world, flipping into ours and back again. And Mom and Dad saw why we love sailing so much. This kind of day is more than worth all the problem solving and hard work. This too, is a real sailing trip. 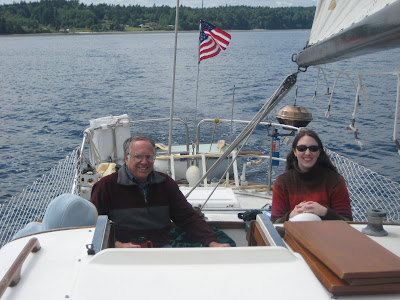 I'm off to another one...I'll be back with more stories!

Email ThisBlogThis!Share to TwitterShare to FacebookShare to Pinterest
Labels: Sailing