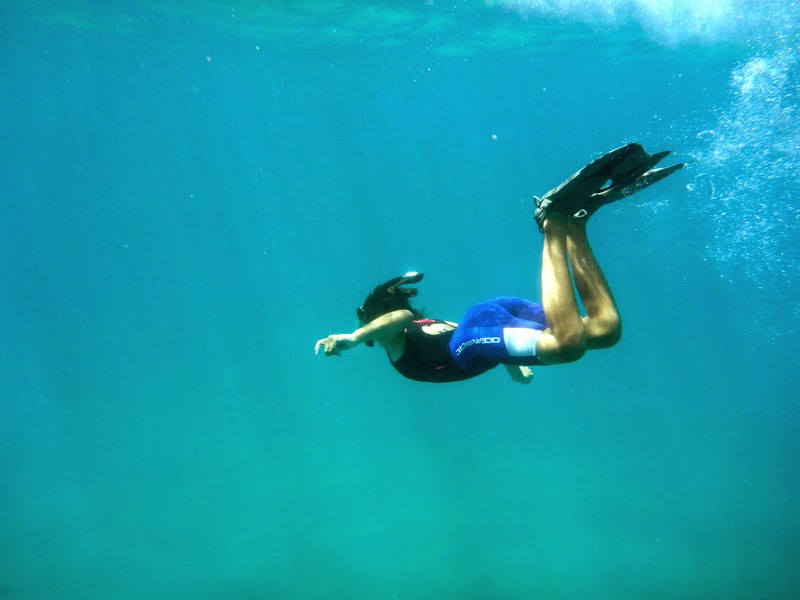 March 18-March 31
We did it! We'd visited Isla Isabel just after the new year when all the booby birds were still mating. Then, a month or so later, we went back during nesting season. Now, on our way back north to Mazatlan, we took the detour back out to the island to see if we could arrive in time to see some of the babies. 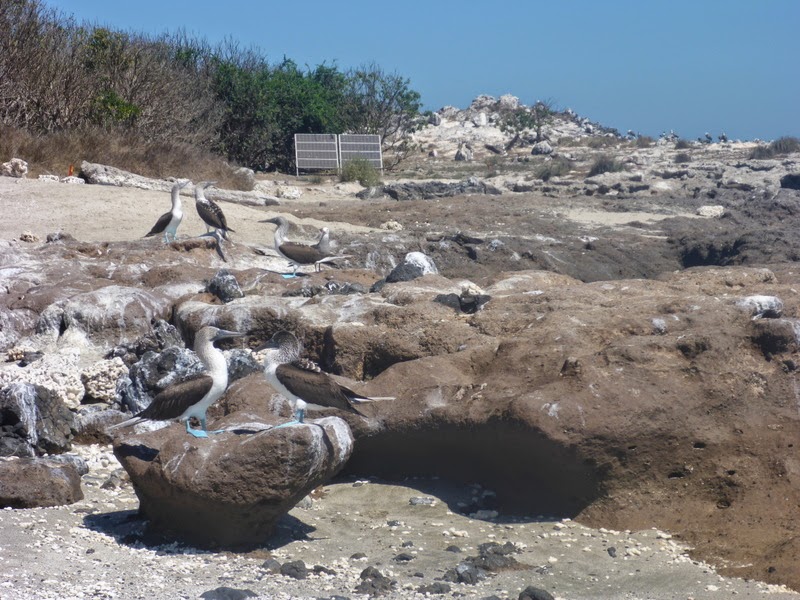 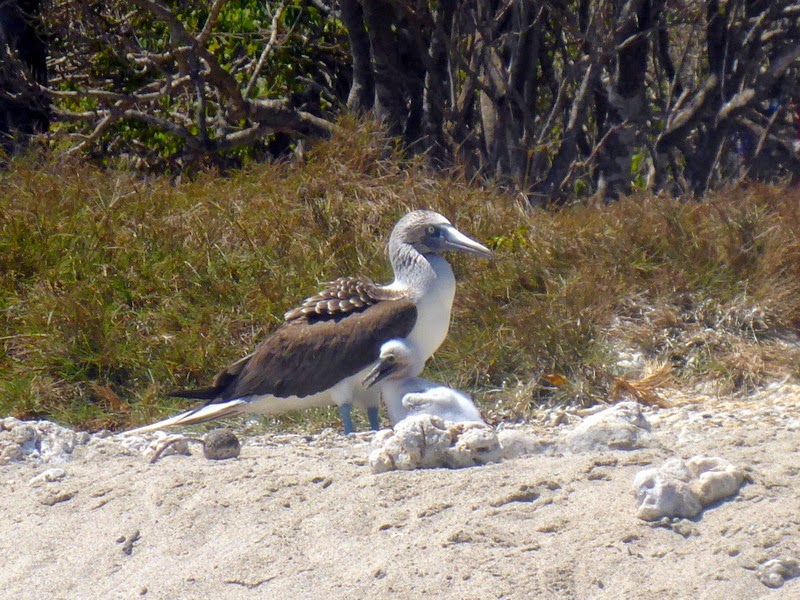 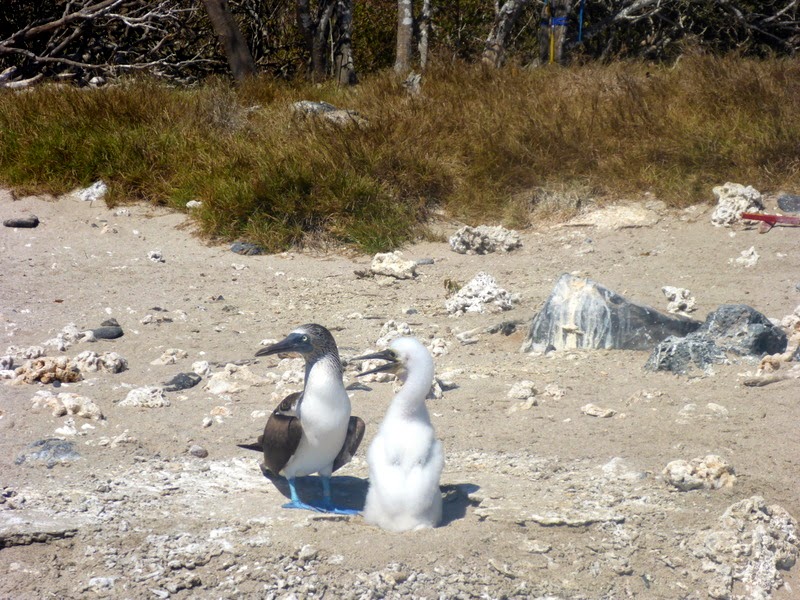 It was a little bit out of the way but, as I told Bryan, if this trip was about efficiency, we wouldn't be doing it aboard a sailboat!


We had a great run over from Chacala and were even able to sail quite a bit of the 14 hour run.
We left around 4:30 am and made good use of the morning offshore breeze as well as the afternoon onshore flow. We arrived just before sunset with enough time to dive in and check the anchor. 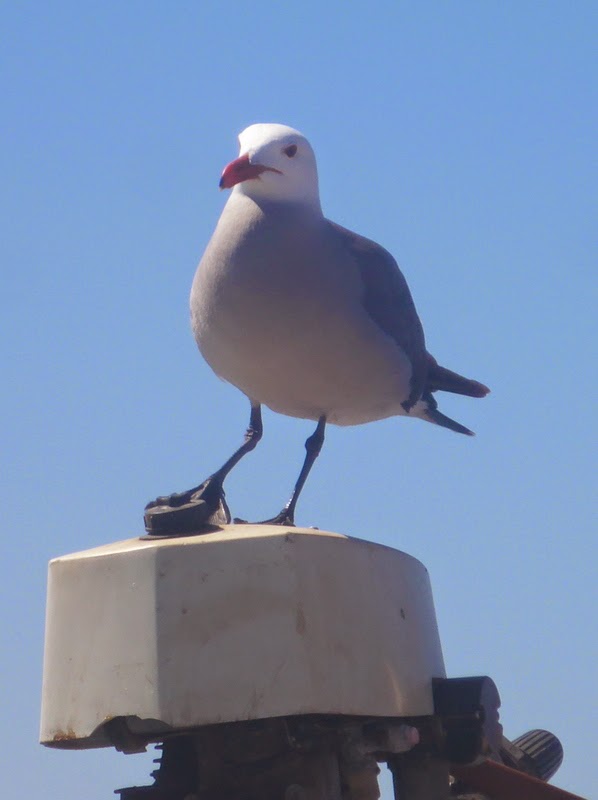 In the morning, we hung out on the boat and kept an eye out for our friends from CrazyLove who were following us up to the island. Their shorter waterline meant a little longer trip, but they made it in just fine. 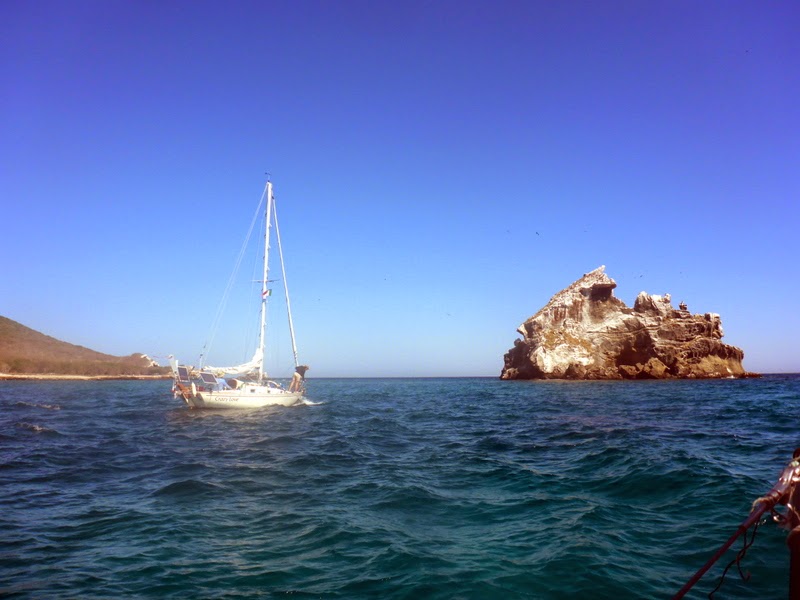 We enjoyed a couple of delightful days in the waters surrounding the island, snorkeling, reading, cooking, and spending precious time with our dear friends, the last days we would have together for quite some time. 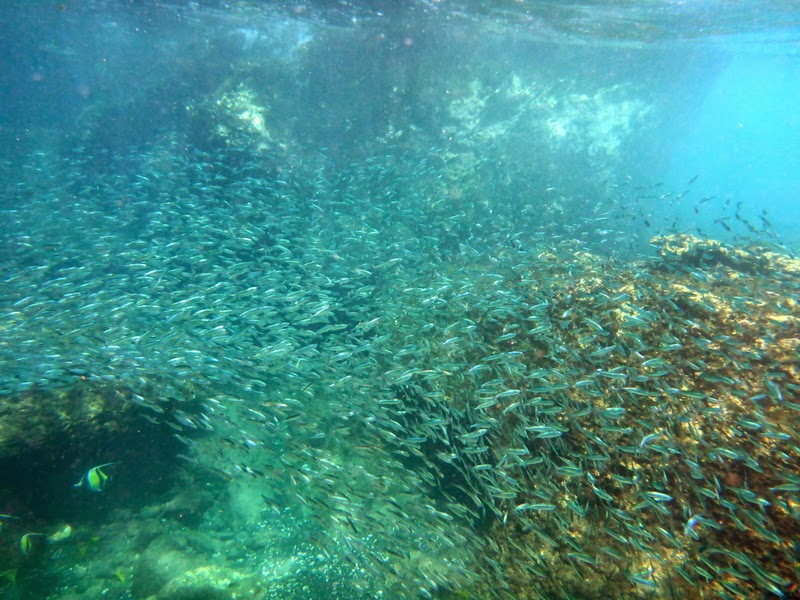 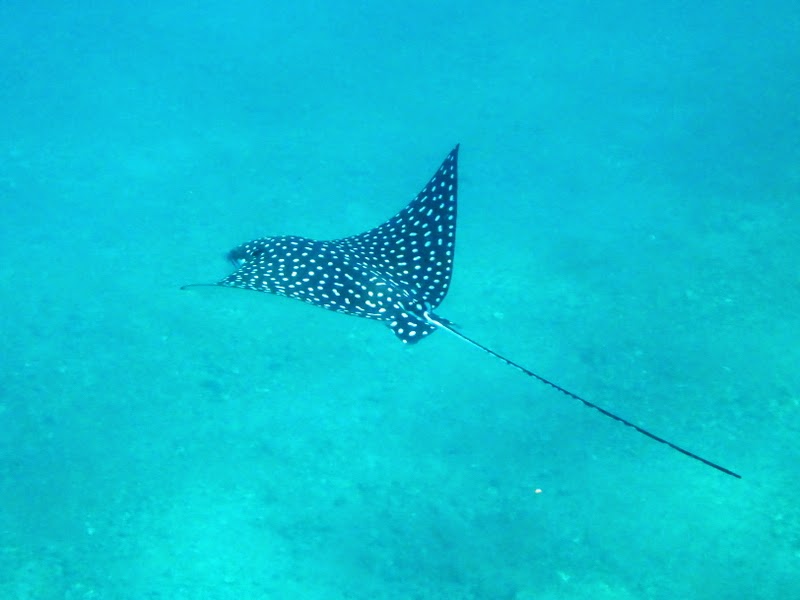 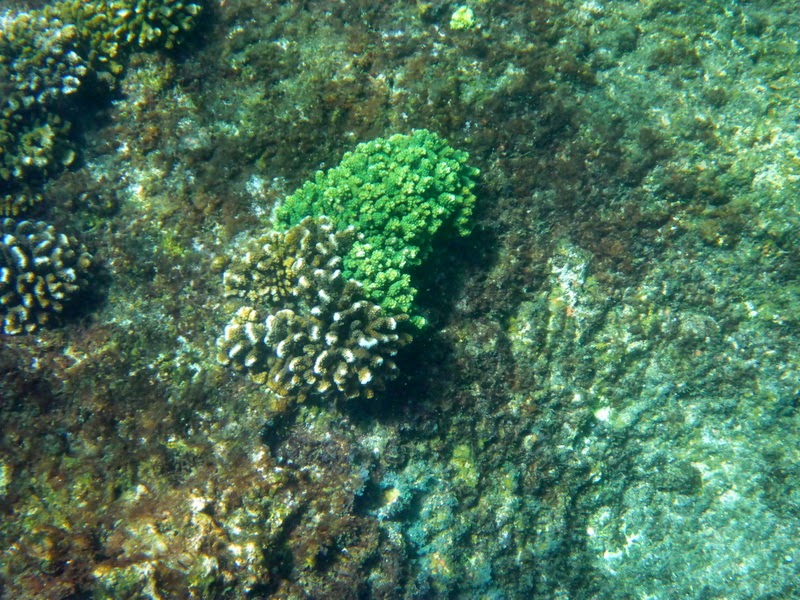 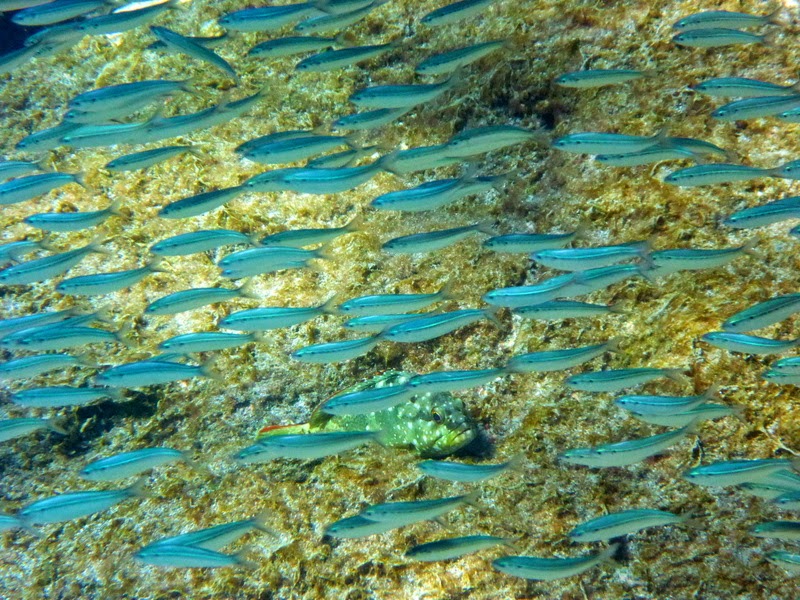 We had dinner together their first evening there and stayed up late our last evening together, sharing drinks and reminiscing. We are so grateful for the vagaries of tide and time that brought them into our life and for the chance to form a lasting friendship in the recent months. They're stuck with us now!

One day, we got a call on the radio from a boat in the southern anchorage asking if we'd heard the announcement about the tropical storm. I hadn't been paying much attention to the radio chatter, so I hadn't heard the official announcement or switched channels for more details. I listened more closely during the afternoon, trying to pick out any information about this unlikely happening; we were nowhere near hurricane season. We watched the barometer carefully to see if a low pressure system was moving in. Nothing seemed amiss, but it took me a few hours to stop worrying. 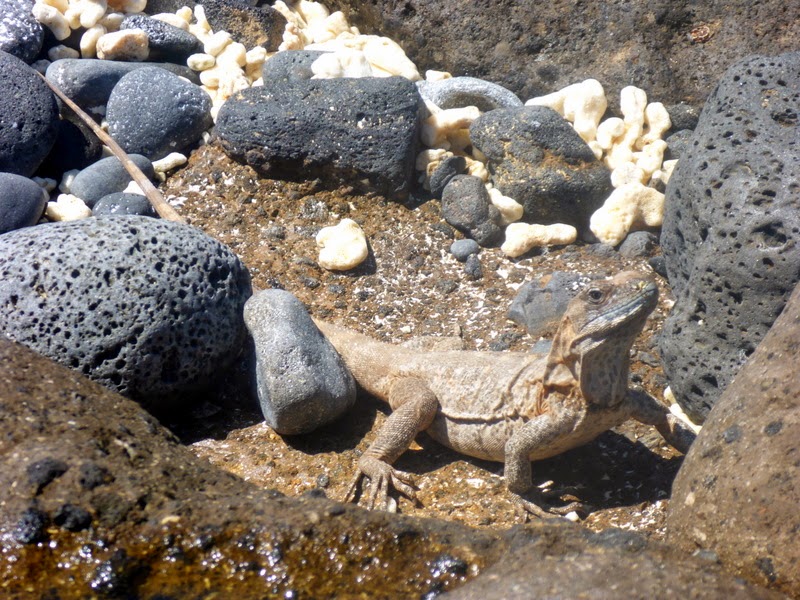 (We heard later that there was a severe wind event in the Sea of Cortez with gusts up to 60 knots or so. Some friends of ours were in the area and waited out the storm at anchor. They told a harrowing, only-funny-in-hindsight story about looking out their hatch at 3am to see their dinghy fly off their cabin top and go sailing away toward sea. They performed a high-adrenaline rescue and managed to re-anchor in the horrible conditions. I'm glad we missed it!)

The day we left for Mazatlan, we finally went ashore for a baby booby hunt. 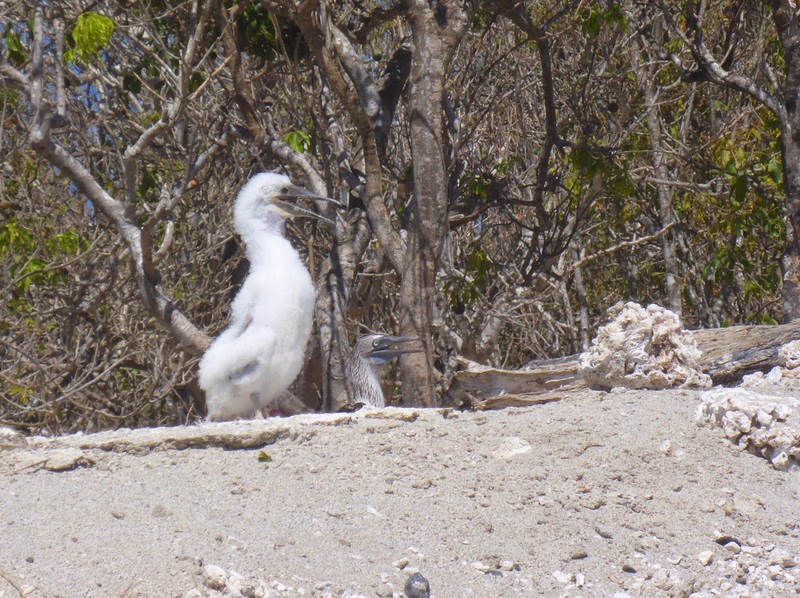 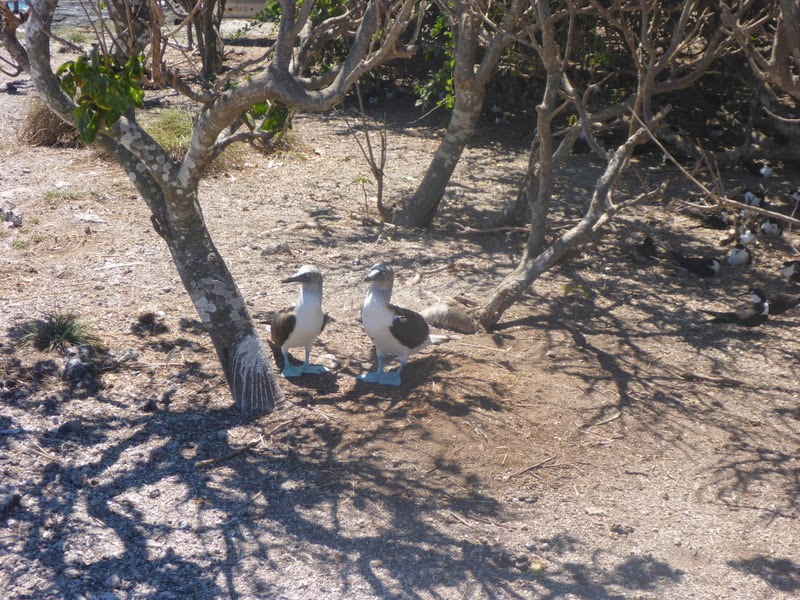 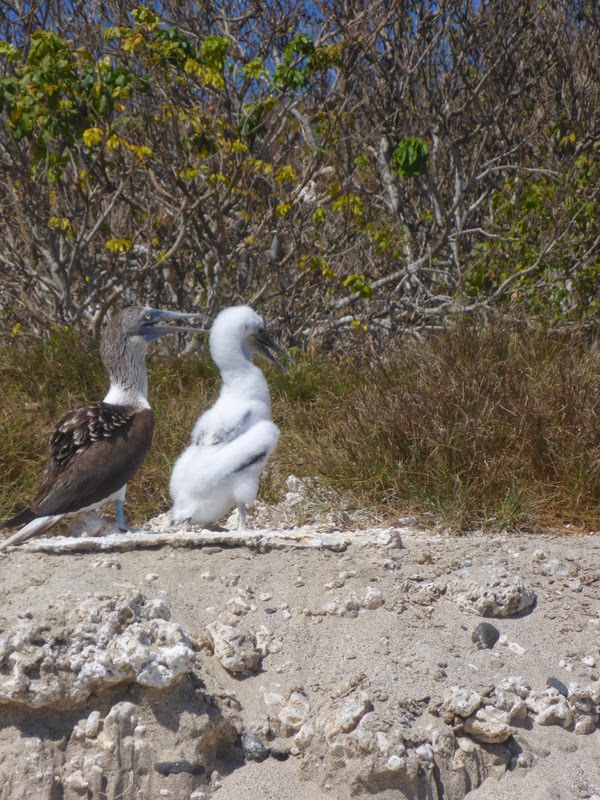 We spotted several babies in the nests on the beaches and hiked inland for a few minutes, past a noisy colony of what I think were ground-nesting terns. 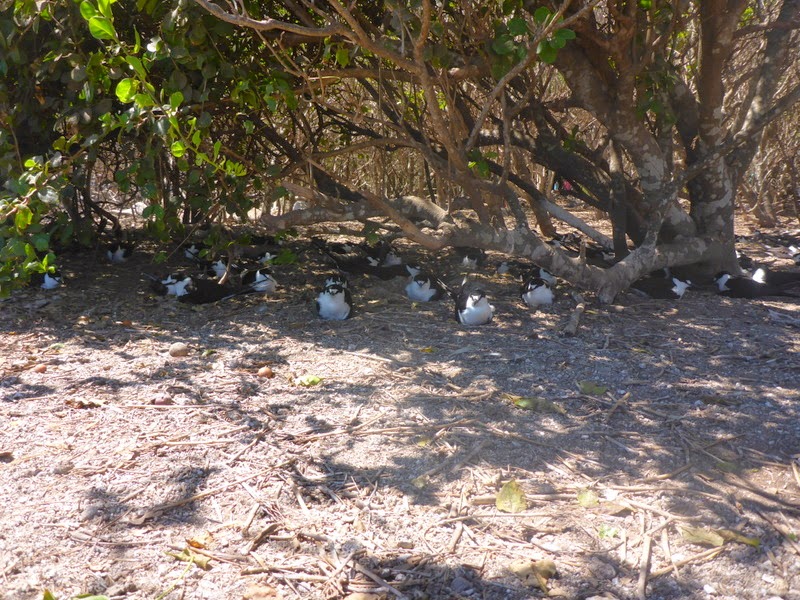 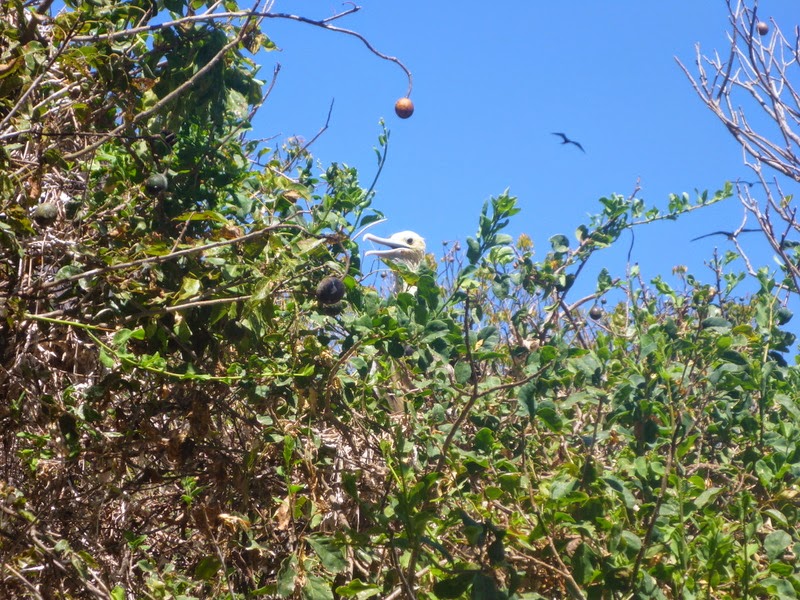 and Hannah hunted for lizards, as usual. 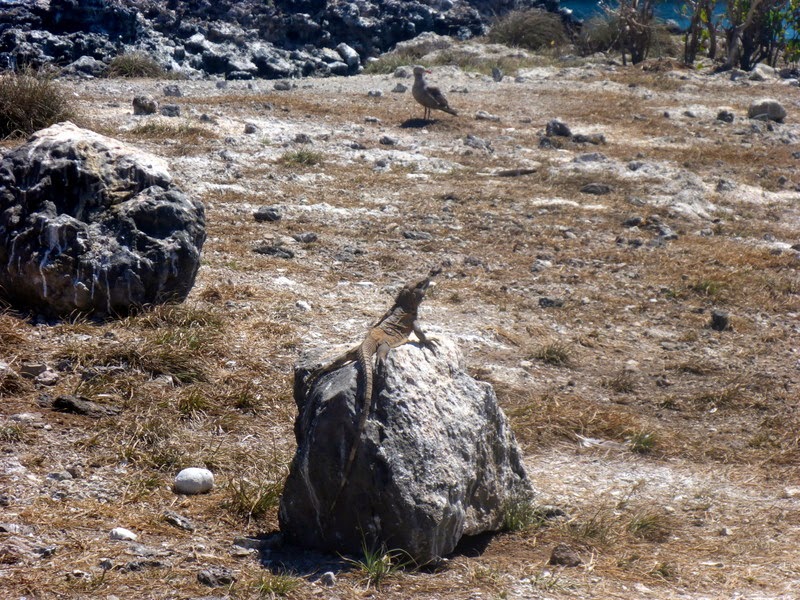 But for some reason on this visit, my eyes were drawn to the evidence of death. 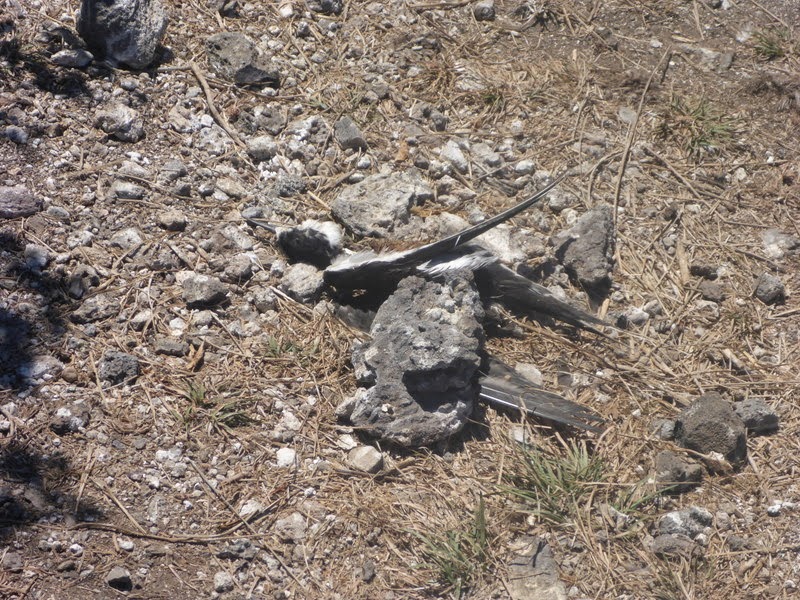 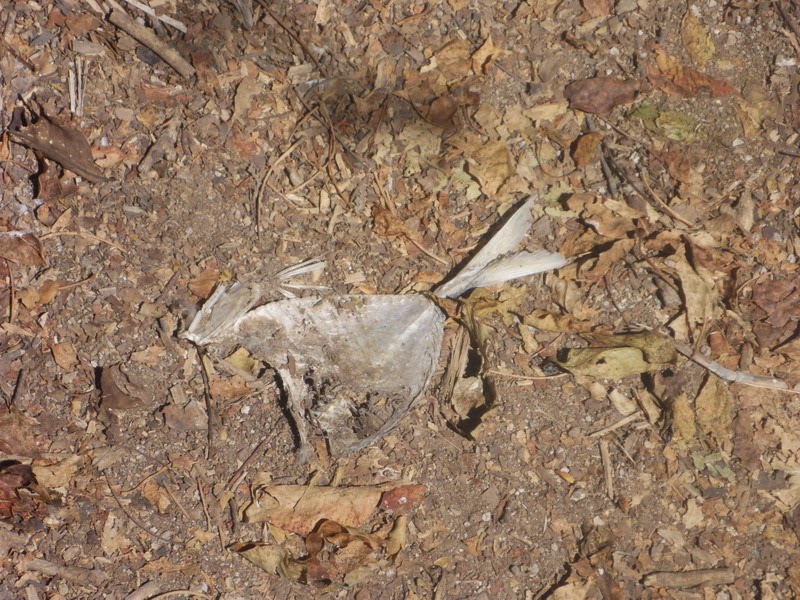 Lobster tails and crab claws cluttered the tide line. Fully-grown birds and ill-fated babies lay sprawled over stones, all the grace of life lost in the twisted pose of death. 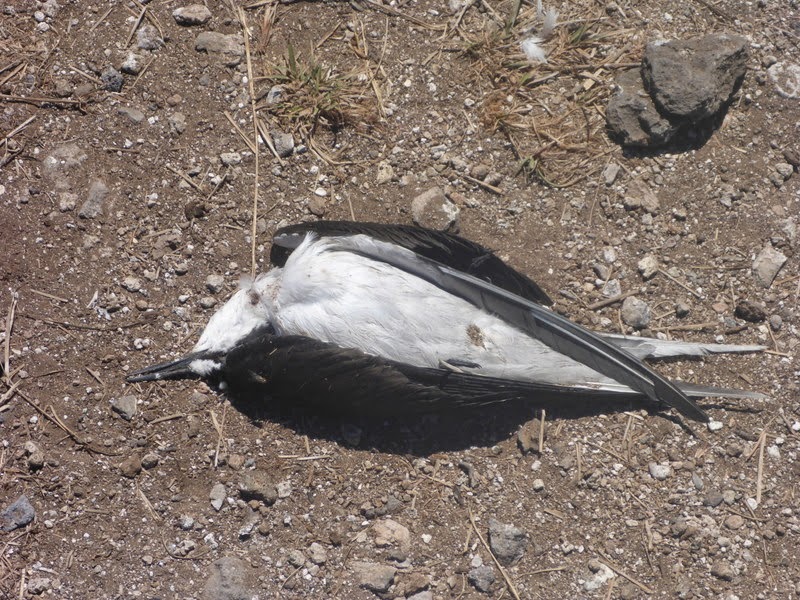 We didn't stay long enough to see the complete process, to watch the carcasses provide food for other creatures or dissolve into the ground to fertilize the soil. 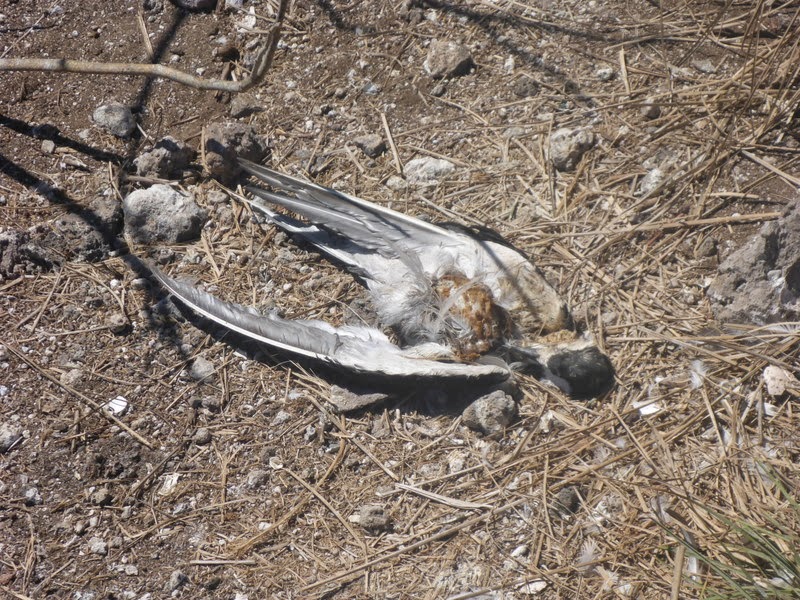 And I don't have anything new to say about the “circle of life.” Simply that the contrast was striking, new life hatching out all over, 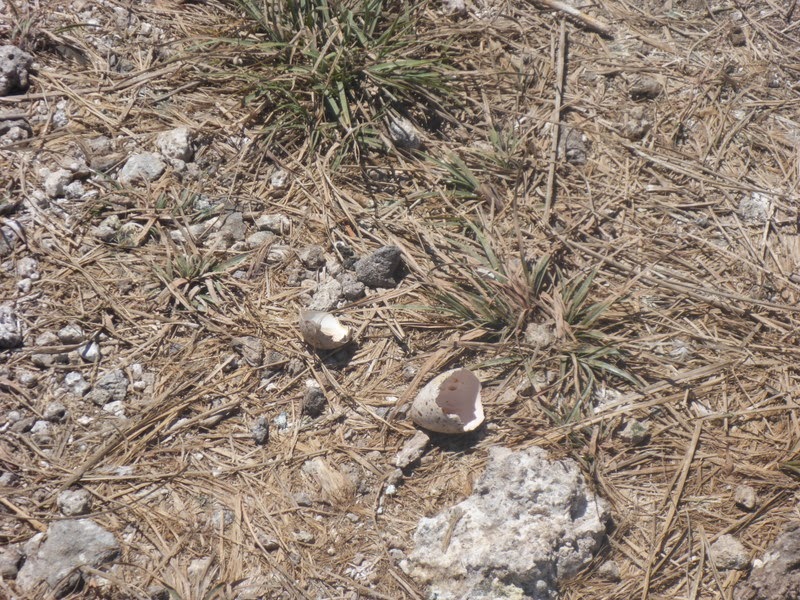 side-by-side with death. Every individual fighting “tooth and claw” to keep from joining the ranks of those who lost the battle for survival. 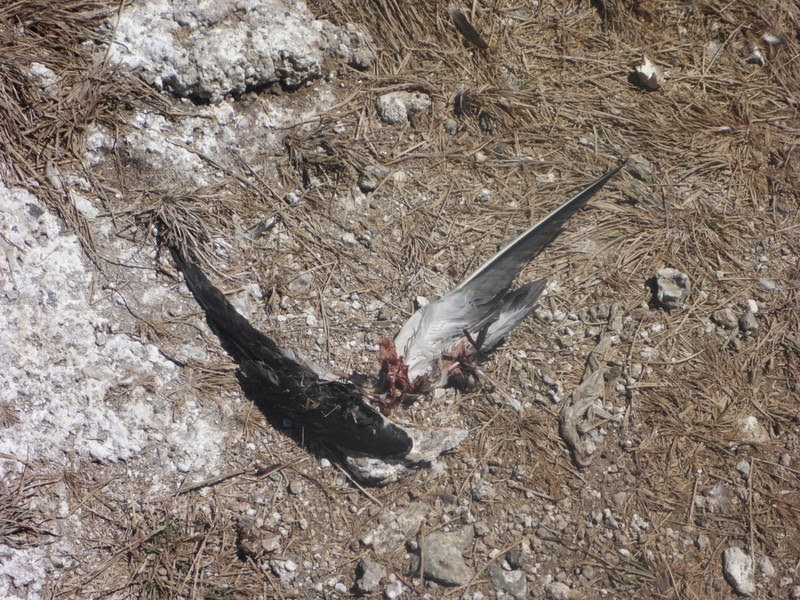 In the afternoon, we rowed over to meet some new neighbors who were getting ready to head out for Mazatlan too. And then, with a last wave goodbye to CrazyLove, we pulled up the anchor and headed north. 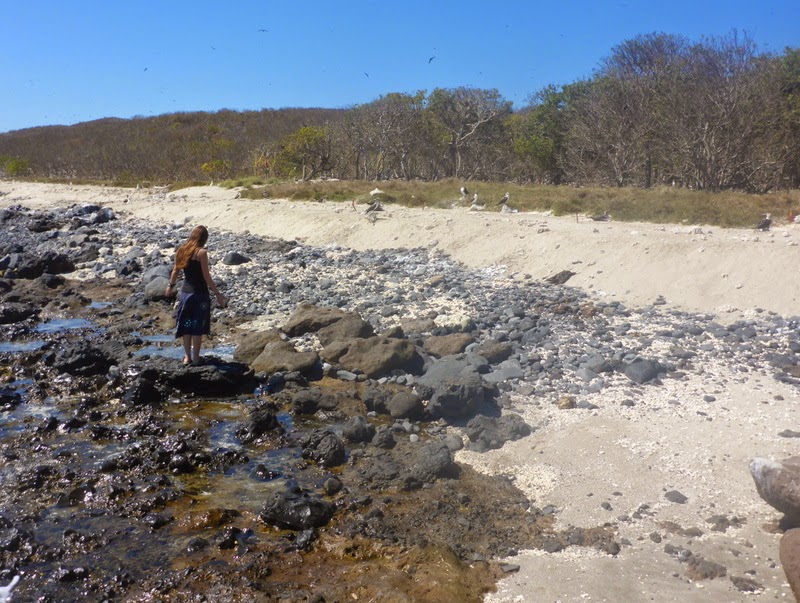 So far, our conditions for going north had been great. Today, we motorsailed in light winds and calm seas. We laughed ourselves silly over the antics of a group of jumping manta rays and watched as they flipped and spun through the air, their wings rippling, and then sat out in the warm evening as the sun set in the blue, blue sky. When I woke up in the morning, the blue was gone and we were motoring over perfectly calm seas through an unexpected bit of thick fog. 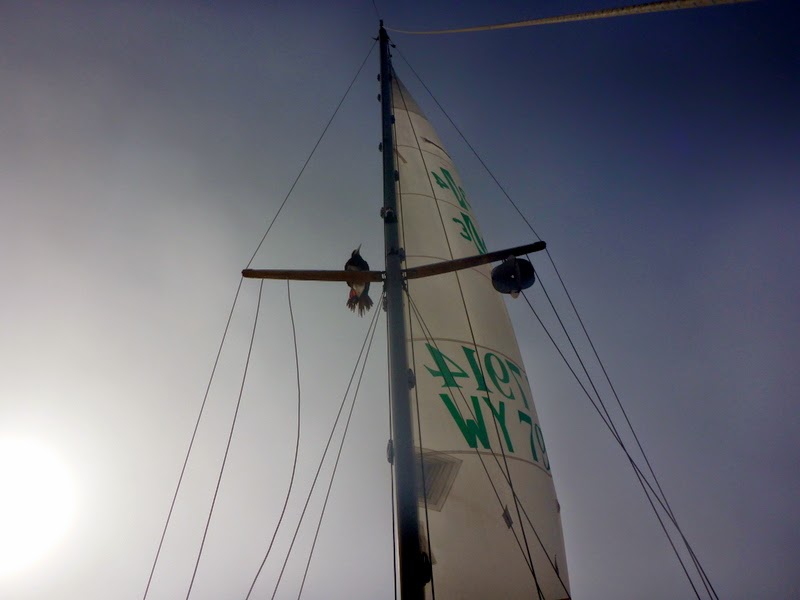 We picked up a hitchhiker, this brown booby up on the spreaders. A closer look revealed why he had stopped. His right foot hung dangling, useless. 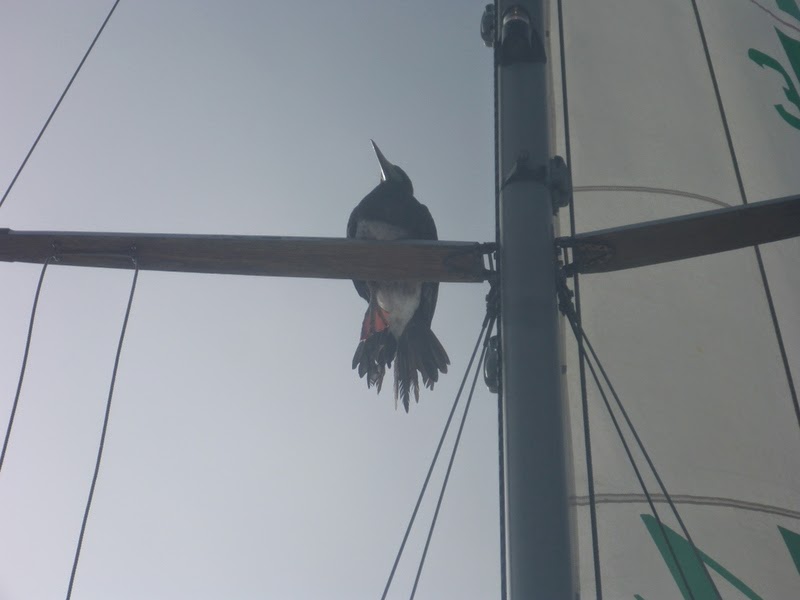 After a few minutes on the spreaders, he took off, only to land awkwardly on our sidedeck. Bryan put on his heavy and gloves and went forward to extricate him from the docklines. 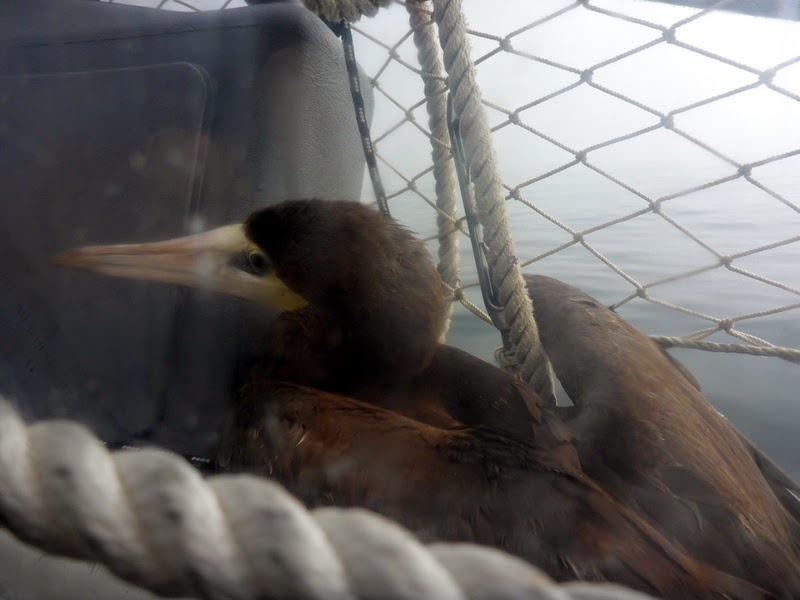 The bird settled in for a few more minutes of rest on the dinghy and we were just planning how to get help when we got to Mazatlan when he flew off, trailing his broken leg behind. We've seen other birds on this trip make do with just one good leg, so we can imagine that he'll find a way to cope. But the images from Isabel linger and I choose to face the hard truths that color the darker side of nature's beauty. 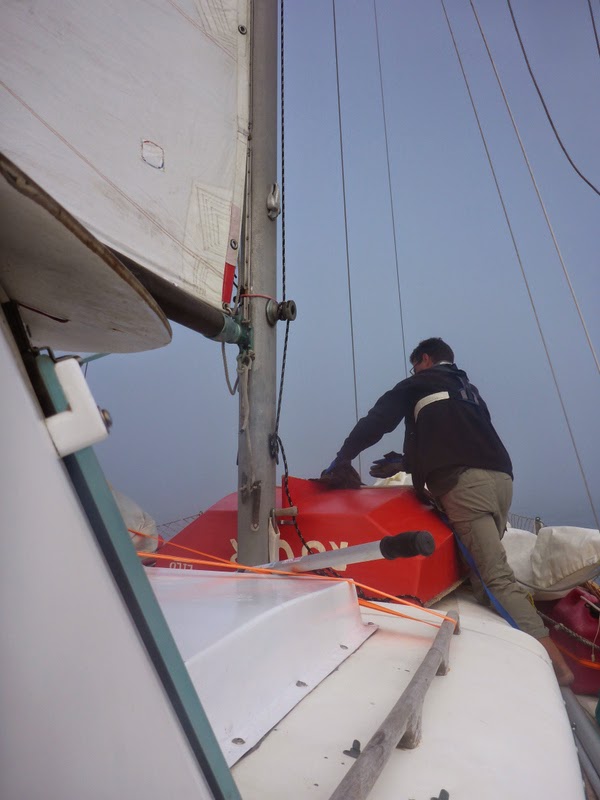 Bryan stayed up past the end of his watch to see us through it safely. I listened on the VHF for any word of traffic exiting the commercial harbor (all vessels are required to obtain permission before entering or exiting.) We took the long way around the islands near the city, safely out of the way of harbor traffic or off-lying rocks. And just before we needed to make the turn toward the small boat harbor at the north end of the city, the fog lifted and we were able to see our way clearly into the marina.
We pulled into the same marina where we'd spent Christmas. We motored straight to the fuel dock and, while Bryan filled up our tanks, I went up to the office to see if they had any availability for us. They were pretty full, but we're small and they found us a slip. We gave high fives all around for a safe completion of Leg 1, then silly, off-balance “foot-fives” because, as one of the girls reminded us, it was the end of the leg. It's a good thing puns don't weigh anything; I think this family would sink the boat. 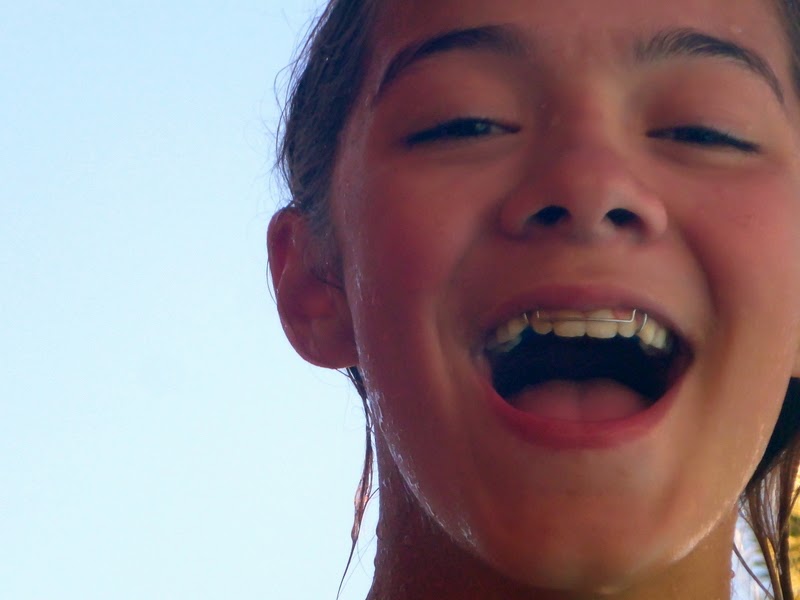