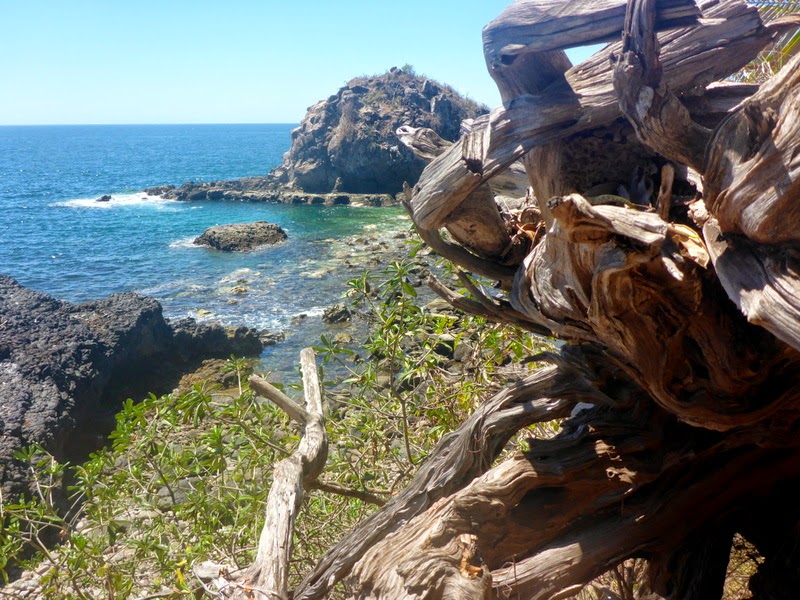 March 14-March 17
Our first afternoon in Chacala, the girls spotted Sandollar a kid-boat we'd met in La Cruz. They called over on the radio only to find out that Sandollar planned to leave the next morning. The kids quickly wangled a movie evening together and we made a big batch of popcorn and washed out a dishpan to transport it to the other boat. 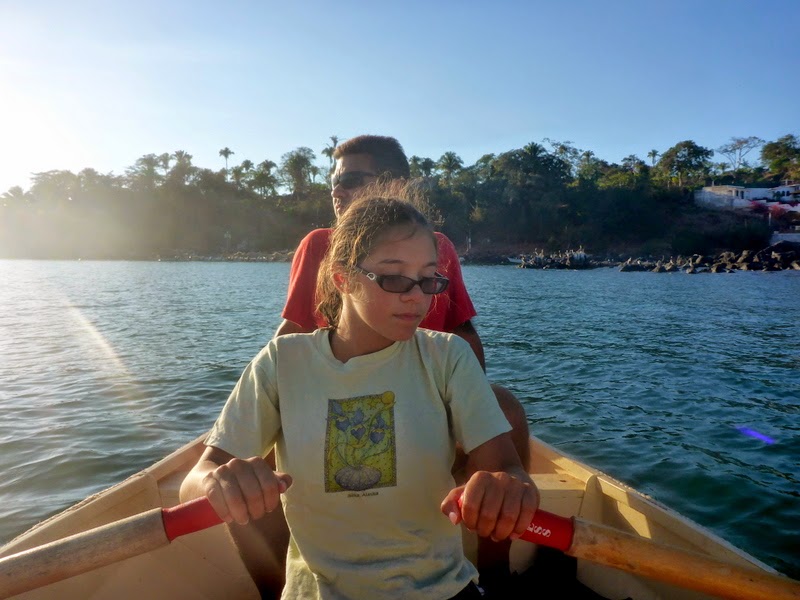 The girls rowed Bryan and me to shore so we could catch up on the internets and then rowed themselves over to Sandollar for the evening. We headed straight for Chac Mool and greeted our old friends, Jorge and Israel. In our transient life, it's nice to settle into a few old routines. (One day in La Cruz, Bryan's phone suggested unprompted that Chac Mool was “only an hour and 12 minutes away.” Apparently it thought we were neglecting our important Chac Mool coffee-drinking duties!) We sat with Ron and Liz, some cruisers we'd met in La Cruz. When we were ready to head back, we called the girls on the VHF and then walked down to the dinghy landing, watching the bay as they rowed across, one at the oars, the other manning the 2000 lumens spotlight.
As we arrived back at our boat, we could see another small sailboat pulling in to the other side of the bay. We knew CrazyLove was following us up at some point, and figured there wasn't anyone else out there with a mast that short. So we rowed over close enough to holler some anchoring tips about who was anchored bow and stern and who would swing around when the tide changed and then got out of their way while they expertly dropped their own anchors. 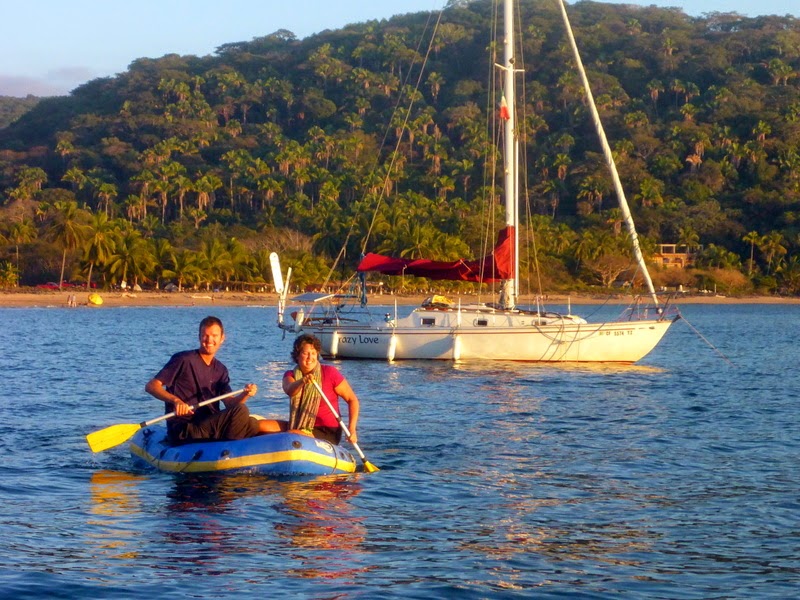 They'd had an easy trip up, so were still up for a short visit. We took over some of our precious chocolate stash and they reciprocated by sharing the last of their unique vanilla tequila.
The next morning, I improvised bread pudding out of stale hot dog buns, apples, and shelf-stable cream (one of my favorite Mexican products!) I read aloud while the girls tidied and Meira took the opportunity to pack away a bunch of things she didn't think she'd need on the trip north. When we're out in big seas, the less stuff there is falling around the cabin, the better. Bryan worked on some boat projects and I cooked up the beans I'd soaked on the way to Chacala, turning them into bean dip for lunch and a delicious curry dinner we shared with CrazyLove. 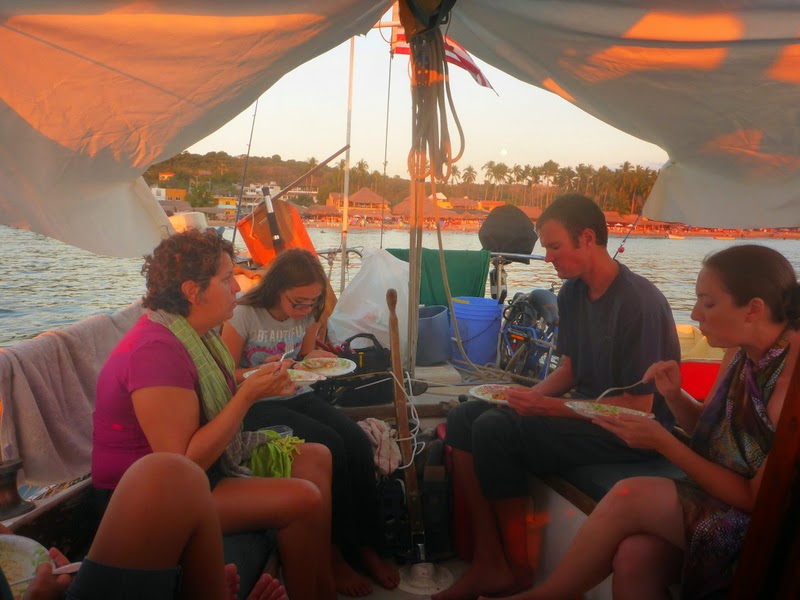 In the evening, all the adults rowed into shore for Chac Mool's weekly salsa night. We sat, feet in the sand, listening to the great live music and plotting a hike for the next day. 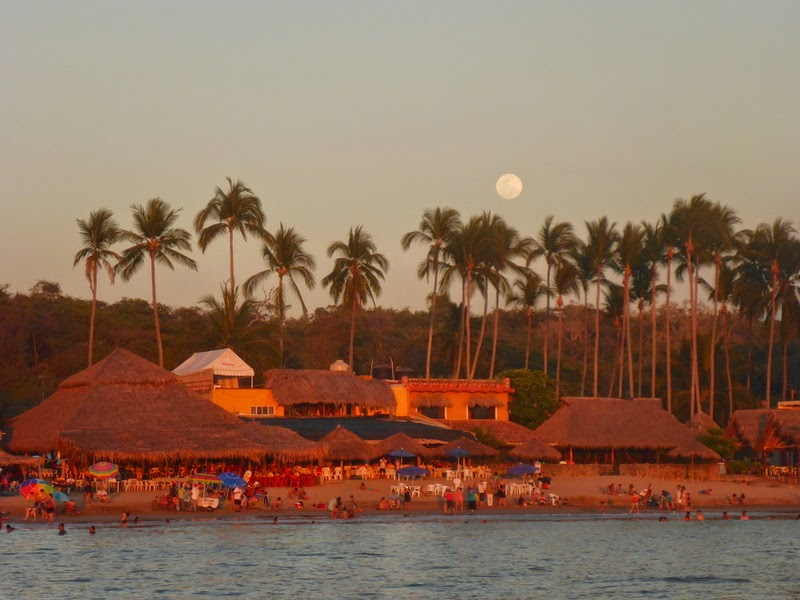 The girls and I stayed on the boat while Bryan went for the hike with CrazyLove and Ron and Liz from Oleana. It was a bit of an adventure, with 2 or 3 wrong turns, a goat farm and some wild dogs. 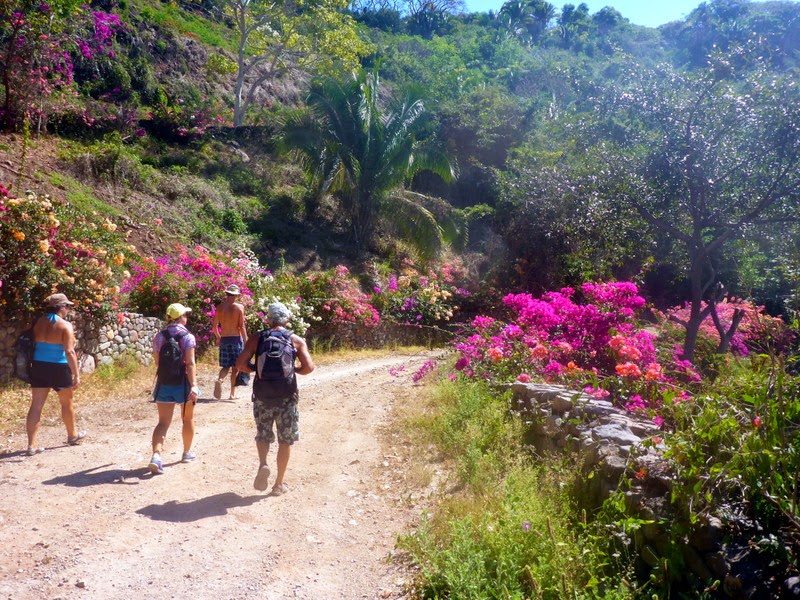 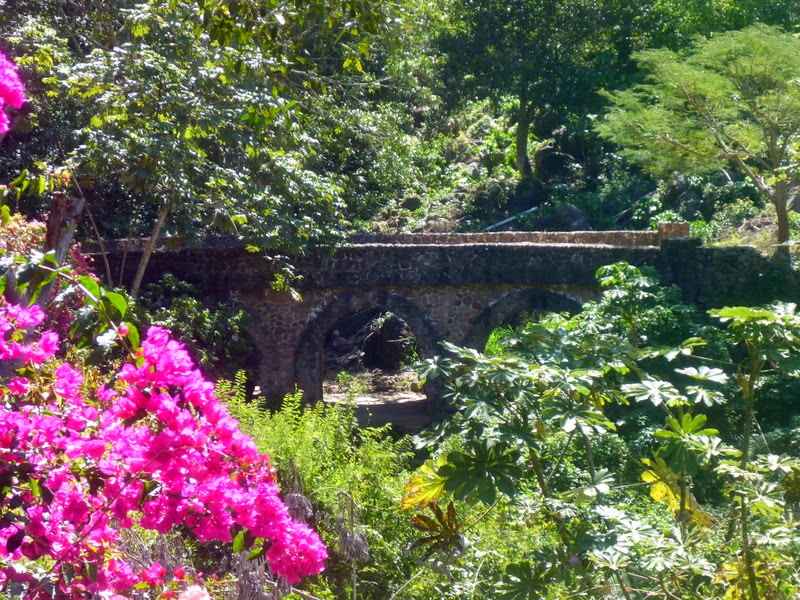 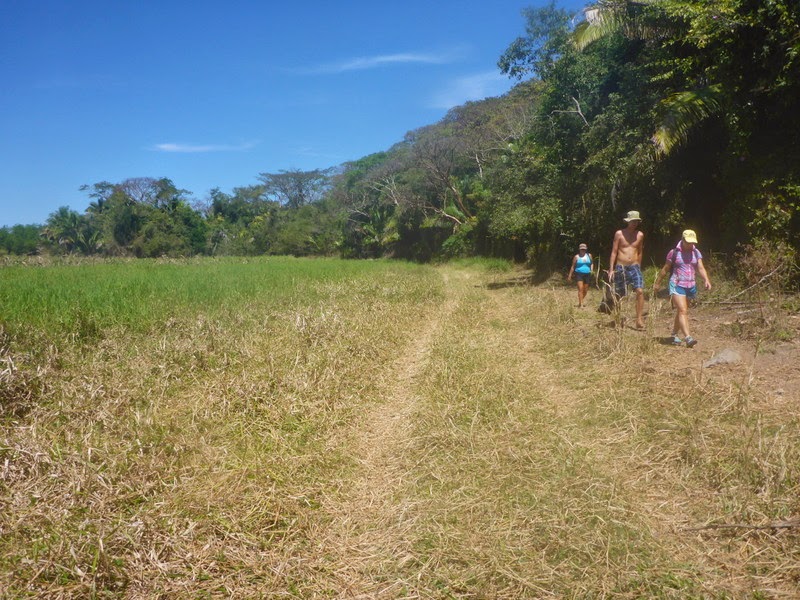 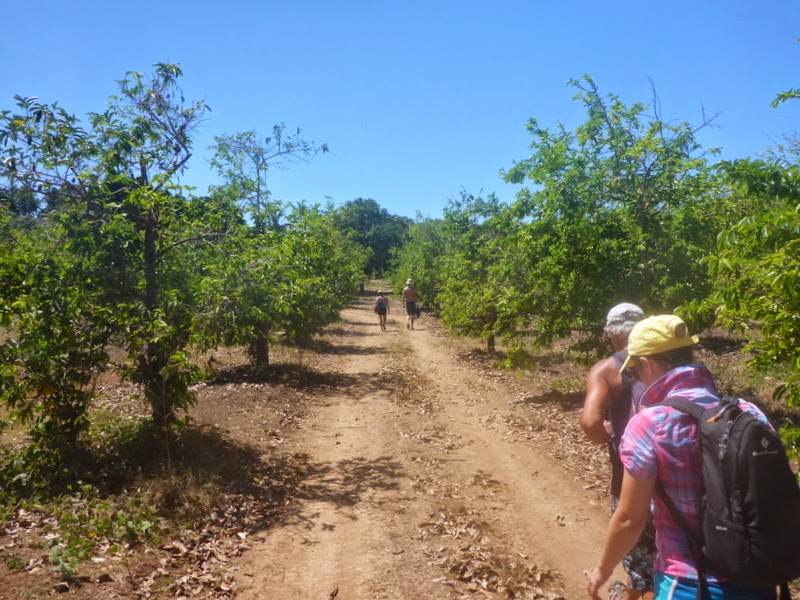 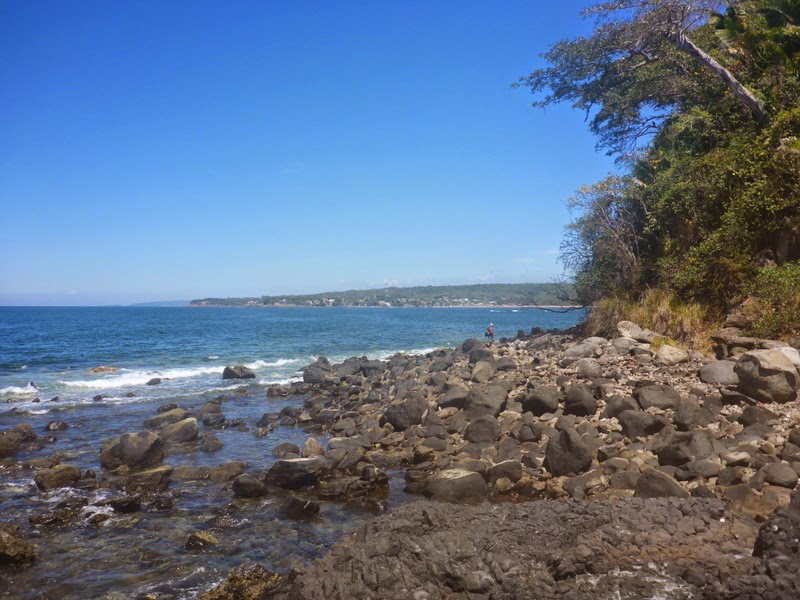 Bryan showed up on the boat with reports of Chac Mool's terminal brownie shortage. Liz had tried unsuccessfully twice now to order a brownie sundae. “Maybe,” he suggested slyly, “someone could make some brownies.” I whipped some together and tossed them in the oven. That evening, before we went to town, Bryan and I rowed across the anchorage to say hi to Princess del Mar. We'd met Werner and his crew-member, Kai, early into our time in Mexico, but hadn't seen the boat since. Werner's daughter, Carina, had joined him in La Paz and they'd spent the intervening months in the Sea of Cortez. They were heading out the next day for Bahia Banderas in preparation for the Puddle Jump to the South Pacific. We were glad we'd caught up with them first!
Ron and Liz, David and Carolyn, and all the LiLo crew went across the street to Tres Mar, home of Chacla's best burgers and posole. While we were there, Werner and Carina came in and we pulled up an extra table so they could join us. We laughed and told sailing stories and eventually moved across the street to Chac Mool for DIY brownie sundaes. Of course, now, they said, they had brownies. But they didn't mind at all that we'd brought out own and they provided plenty of ice cream all around.
March 17 was our last day in Chacala. After the unpleasant discovery of a corrupt hard drive on our computer, we spent most of the day aboard trying to get it working again. 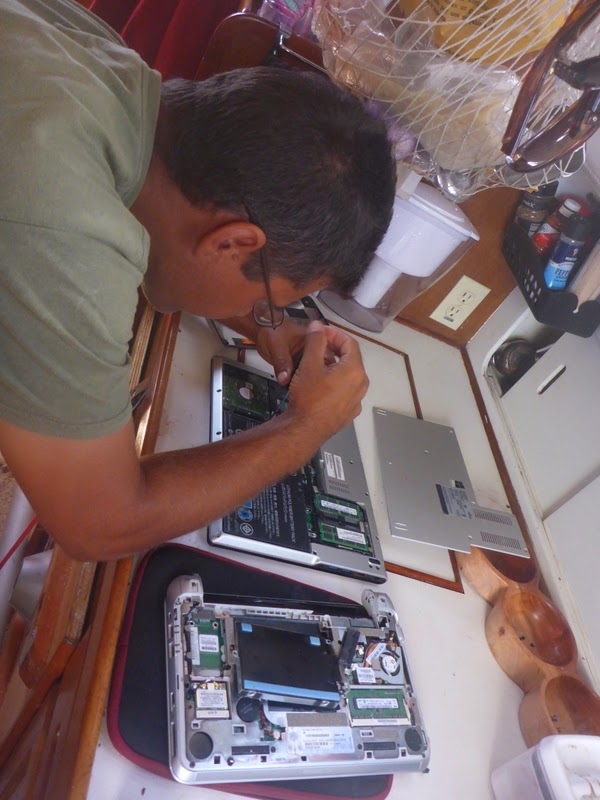 We finally gave up and rowed in for a last-minute necessities—apples, tortillas, and TP.

The power in town had been out all day. Some stores and restaurants had generators, but others were dark. When we stopped for tacos at our favorite taco stand, the cook hadn't been able to use her blender to make the traditional pureed salsas and she apologized for the lack with a shrug at the darkened bulbs. “Who knows why?” she said. At the tienda across the street, we shopped by candlelight, poking into dark corners to find what we needed. As we were paying our bill, the power came back on. We headed over to Chac Mool for old time's sake and ordered drinks while we checked the weather and our bank accounts. We discovered a several thousand dollar fraud on one of our accounts. Thankfully, we'd just finished the six-week-long process of resolving a fraud on our other account and could once again access the cash in that one. We sent a note to the bank to shut this one down and start the investigation and then said goodbye to Jorge and Israel, servers who had become our friends. One last time, we walked back in the dark to the dinghy beach. One last time, rowed around the familiar rocks to our boat for a few hours of rest before the passage to Isla Isabel.
Posted by Bethany at 6:00 AM