Today’s plan included a bunch of errands, laundry, showers, and getting the boat ready for 2 days and 2 nights at sea. All before we needed to leave in the early afternoon. By 10 this morning, it was obvious that was a bad idea. We’re all still recovering from the cold we caught and Bryan came down with it last, so he’s still the worst off. He’s in no condition to deal with the potential of bad weather on the way to Mazatlan, so we decided to spend one more day here in Cabo before we leave. 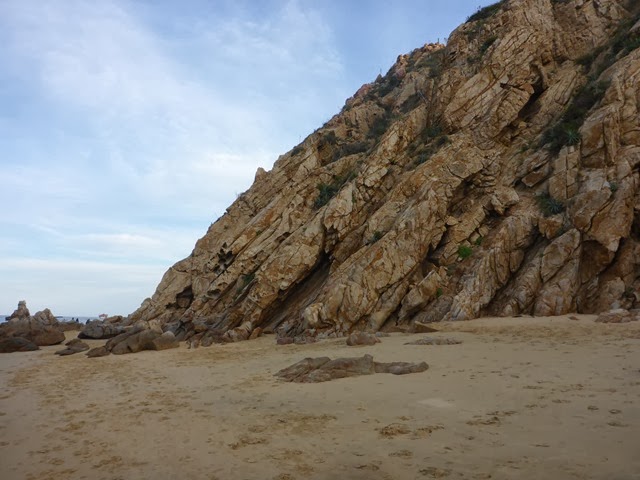 It was a really good decision. We’ve been taking breaks around the edges, but it still feels like we’ve been working hard since we got here. Today we had a relaxing morning and did a few boat chores before mustering the troops for a trip to the beach. We hadn’t touched sand since our first day here; it was about time.
We packed up swimsuits and towels as well as our new snorkel kits (One of the people we met in Ensenada told us that the Spanish word for snorkel is snorfular. Say it out loud and try not to smile:-) 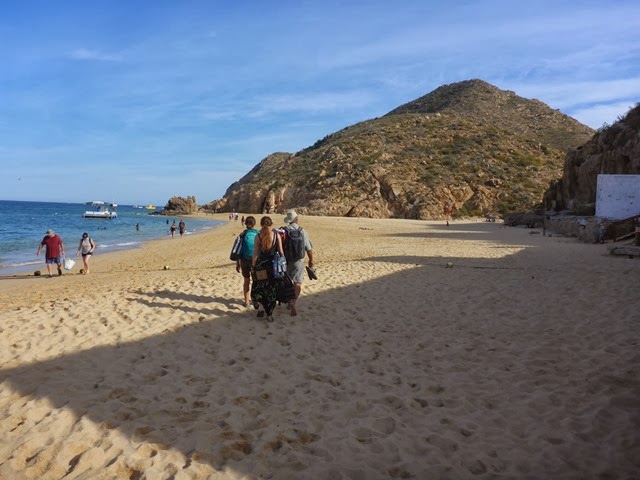 We walked in the heat around the marina to the strip on the other side and through a naval base to the beach where the locals go. The beaches were a bit steep and the surf a bit high, but we found a place where we thought we wouldn’t kill ourselves. By this time, we were all ready to cool off. 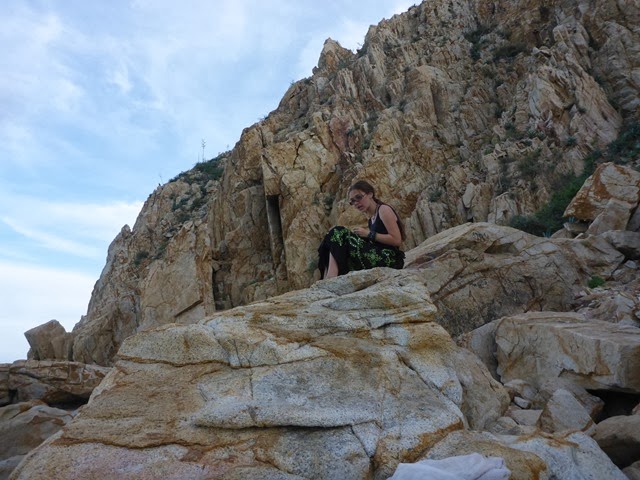 Hannah found a place in the shade of the majestic rock formations and built a sand model (not to scale) of Middle Earth. There may have also been some knitting involved:-) 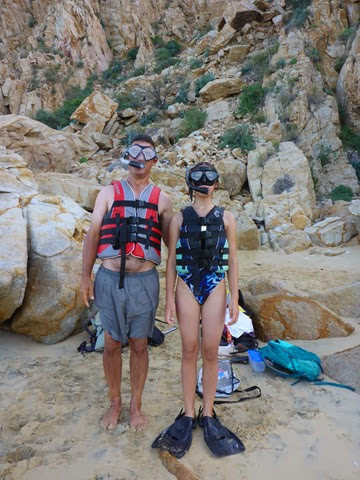 Meira and Bryan jumped in right away and then Bryan coached me through the first strange minutes of learning to breathe through a tube. We floated around for a while looking at the sand formations on the sea floor, spotting the occasional brightly colored fish. 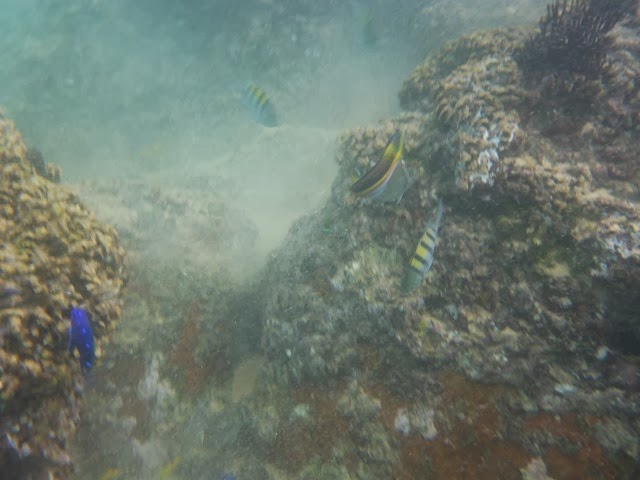 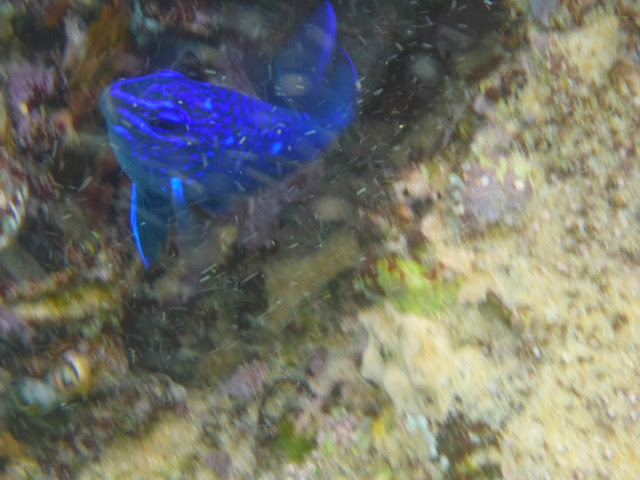 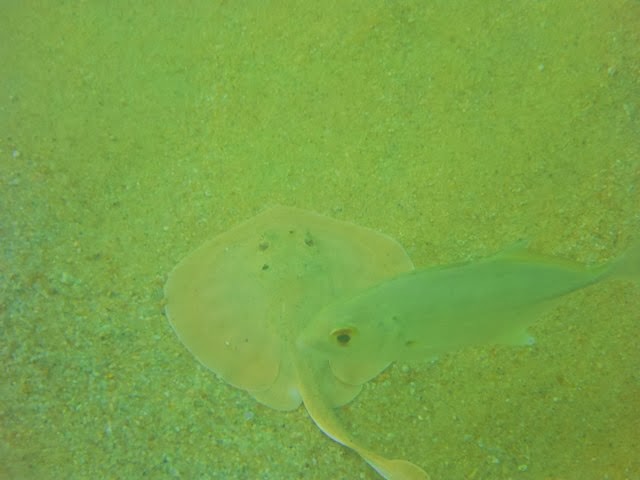 These rays were always accompanied by a pale fish friend. It makes me wonder what connection they have. I’ll probably look it up sometime, but it’s not a bad thing to sit with wonder for a bit. 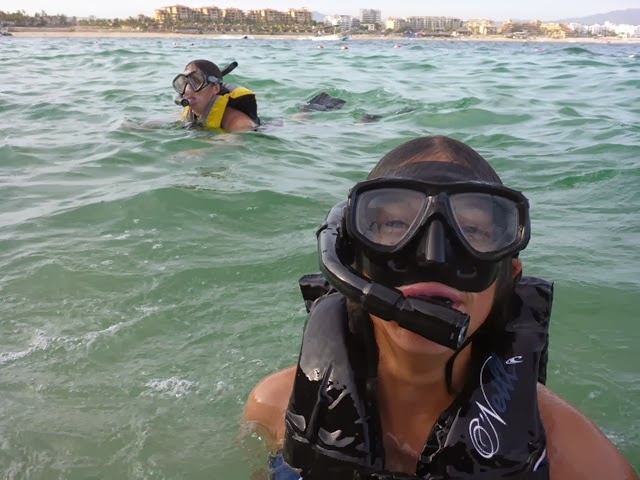 Bryan got some great underwater video too. At some point we'll take the time to edit and post it. We know we’ll find clearer water and more plentiful sea life in other places, but we don’t care. Today was pretty cool.

We walked back, resisting the urge to take a water taxi the 2/3 mile or so. On our way back, we ran into someone we’d met on our first day here. He works on the other side of the marina, and we hadn’t been over there since he helped us find our way around early in our stay. That first day, when he found out about our plight, he started searching right away for a new dinghy for us. We were coming back from dinner when he pulled up in a friend’s water taxi, bow to the rock quay. “Get in, get in! Quickly!” He hollered and motioned so enticingly, even though we didn’t know what he wanted or where he was taking us, we climbed over the railing, down the rocks and over the bow into the water taxi. It turns out, he’d been looking for us all that first afternoon. He had a friend who was selling a couple of  “very new” inflatables and thought they might be a good option for us. His friend was gone by the time we got over there, so he brought us back, free of charge, and a bit more sedately. We made casual arrangements to meet the next day, but by that night we’d decided to build instead of buy. It was great to find him and give him the update on how everything had turned out. We showed him pictures, though it took a bit to make it clear we’d actually built the whole dinghy since he’d last seen us.
We cleaned up a bit at the boat and then walked up into town to find dinner. We decided to try a restaurant that had been recommended to us by one of the security guards. But we couldn’t quite remember what it was called or where it was. I finally stopped a stranger and asked directions (in a language I don’t really speak, to a place I didn’t know the name of). We figured it out and started walking that way, but before we found the restaurant the smell of flame-grilled meat reeled us in. We didn’t regret our decision for a minute.

Then, just to finish off the day right, we stopped by the nearby McDonalds (they have angus hamburgers with tabasco sauce here; of course they do!) and got ice cream cones all around. The cones were made out of Oreo cookie and I can’t figure out why they don’t sell them everywhere. Mmmmm! We got a little goofy, but left before we got kicked out. 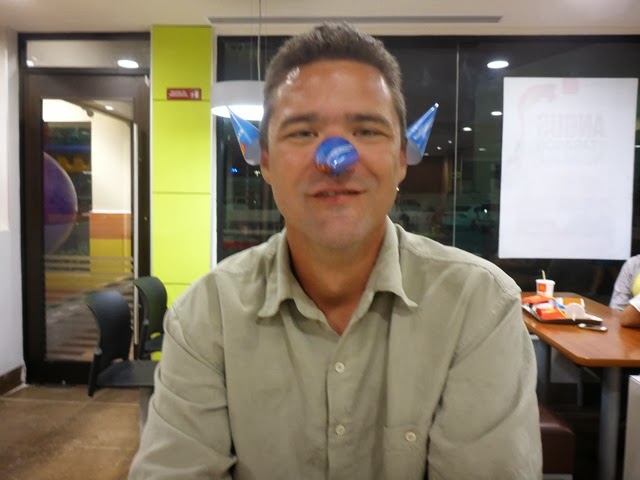 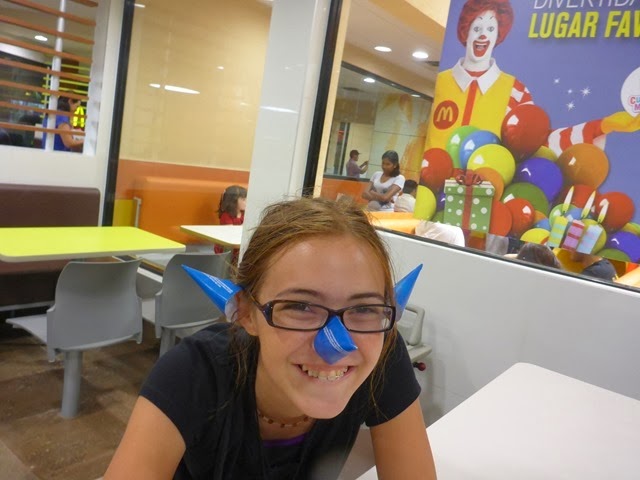 The girls went back to clean up the boat while Bryan and I came up to the marina plaza to do the laundry and make a phone call. And now, I’m typing this standing by the table in the laundry room, trying to finish before the last dryer does and hoping I haven’t forgotten anything we need for the trip to Mazatlan. We didn’t get all our errands run today, but I think our time at the beach was just what we needed! 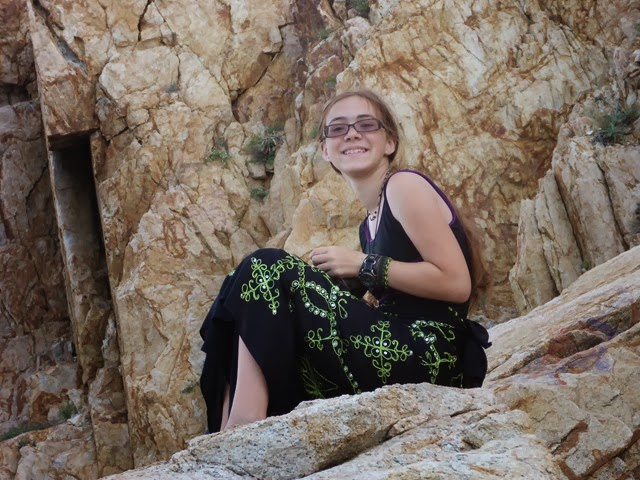