After last night’s late night, this morning came early. Hannah is the only holdout against the cold we’re passing around. Bryan woke up sounding awful and feeling worse (and I’d managed to lose my voice in the night), but after some coffee, he took off for the build site to sand down the worst of the bumps and runs in the epoxy. He told me his set-building friends in college regularly denied being carpenters or woodworkers. “This is wood-butchery,” he quoted. While it’s true we’ve taken several shortcuts that make his woodworking heart grimace, we’ve also accomplished an amazing amount in the last few days. And paint covers a multitude of sins.
The girls and I showed up just in time to start painting.We wiped the sanding dust off with wet rags. 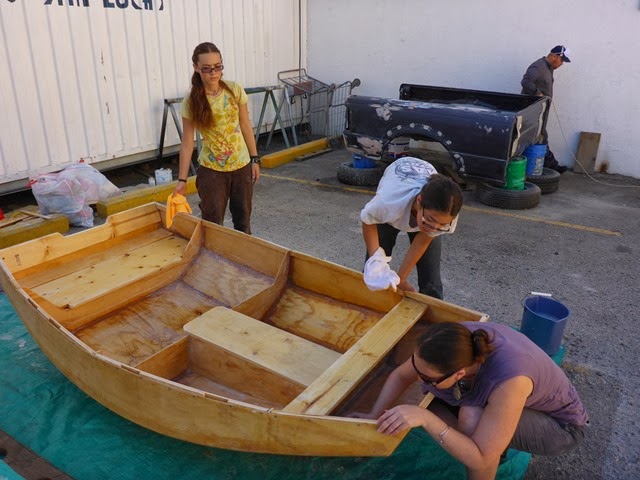 Bryan applied the ceremonial first brushstroke and then we left the girls working while we ran to the market around the corner on a “hydration/floatation run.” (We plan to remove the seats and add extra floatation when we get enough bottles saved up.) 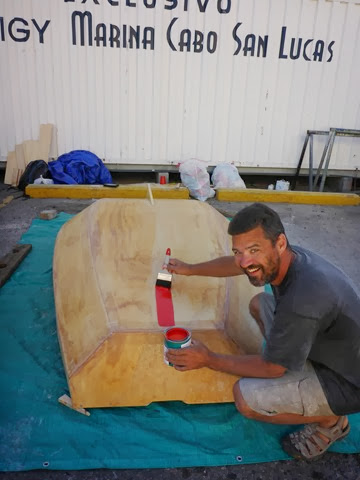 “Let us know when you’re going to move your boat,” our friend in the info-booth called out “We’ll get some nice strong men to help you!” It’s so heartening to have developed such a delightful community of local encouragers in the last few days. 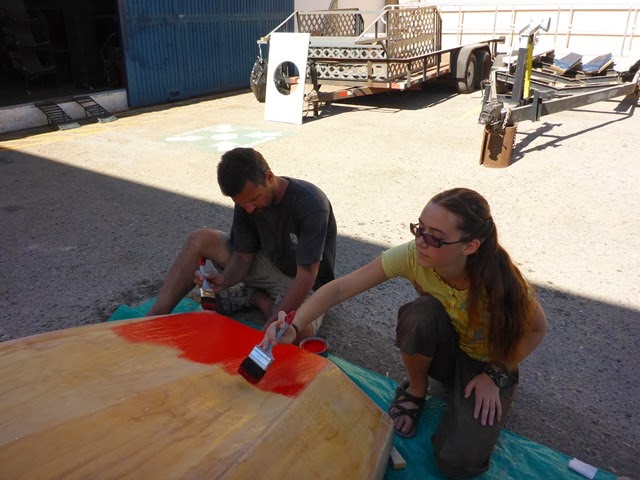 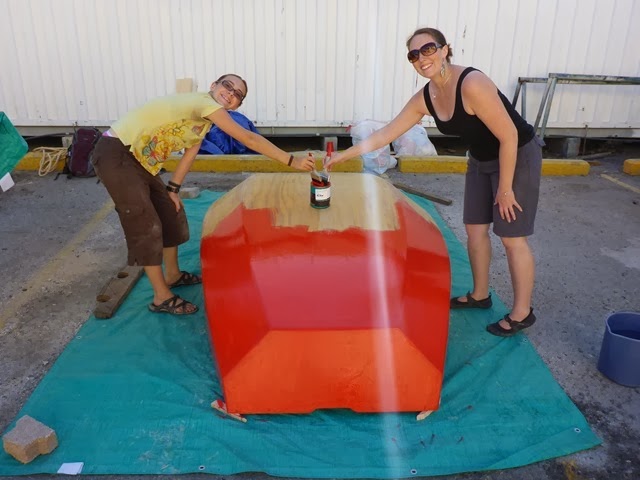 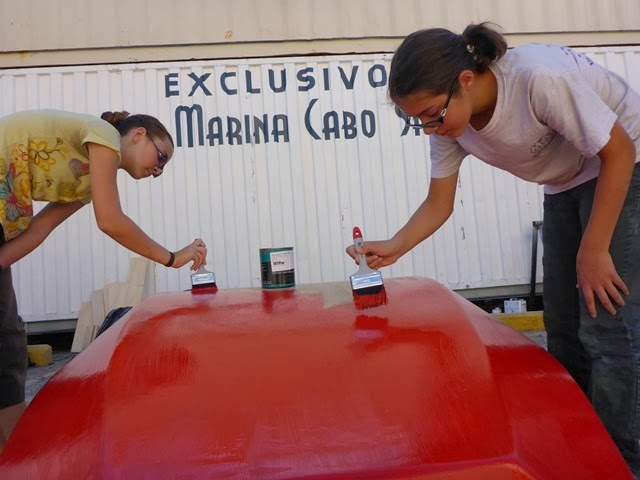 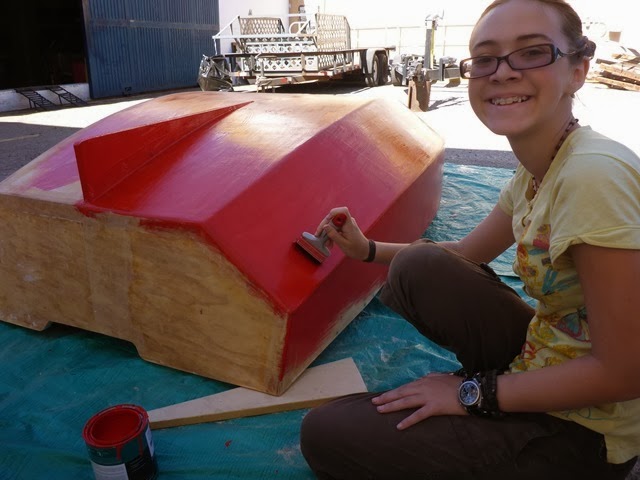 By the time we finished painting the stern, the bow was dry. In this warm weather, we knew it wouldn’t be long before we could apply another coat.
It’s not all hard work. Here, Bryan makes sure that Hannah doesn’t miss out on being harassed by immature boys she would know if she was attending middle school this year. 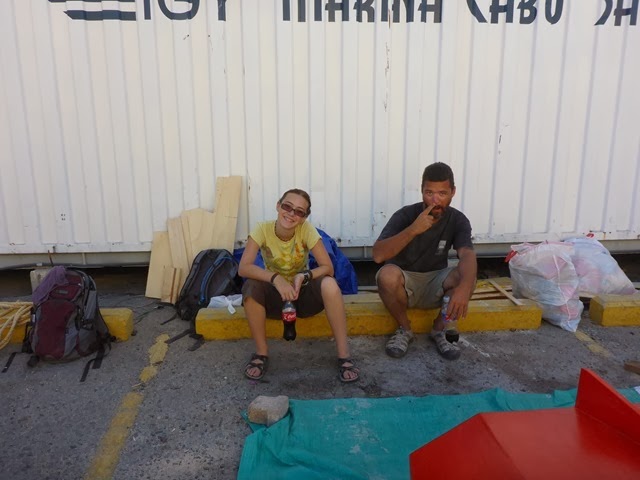 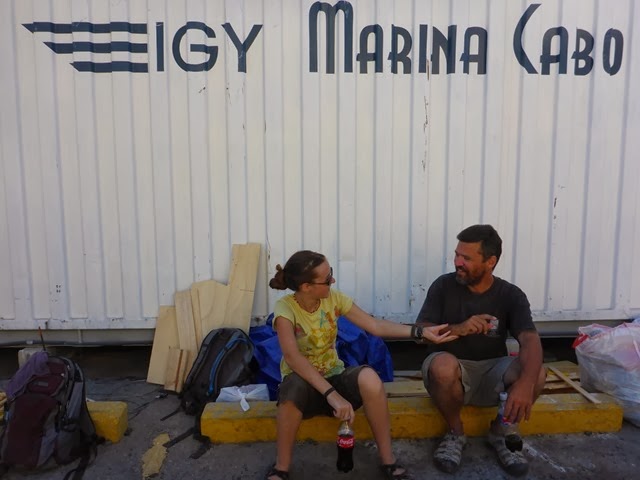 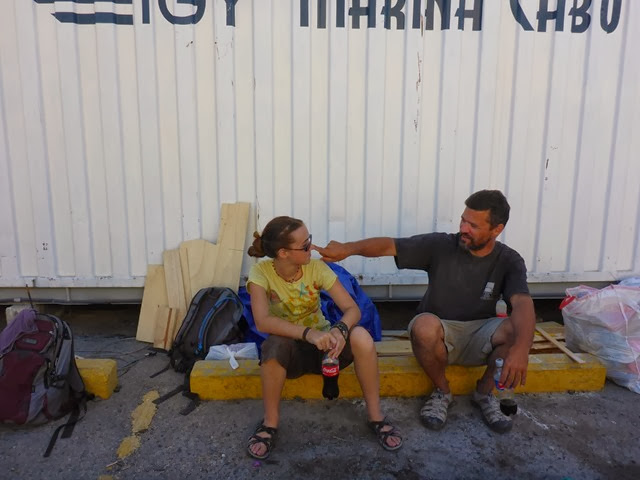 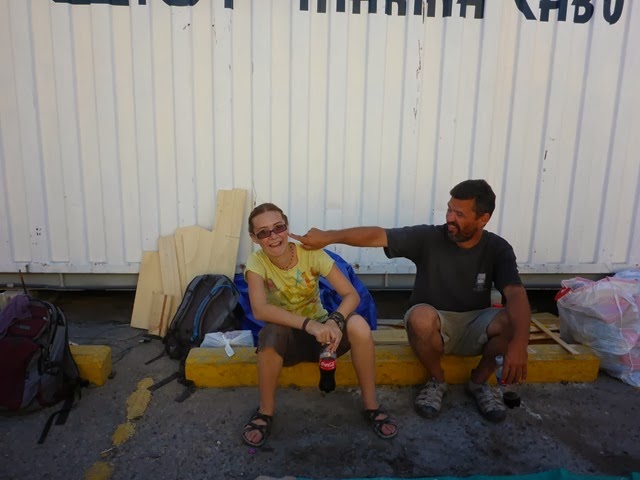 After a few minutes of literally watching paint dry… 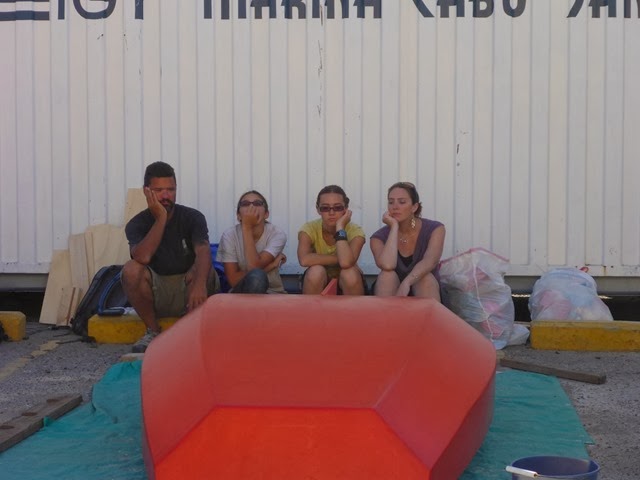 …we walked to a nearby grocery store and took our picnic lunch back to the marina patio.
After lunch, we painted the second coat of red, waited a few minutes until the paint was barely dry, flipped the dinghy, and painted the interior. While the crew painted the second coat of red, I walked up to the hardware store for more brushes. We could fill our wash bucket from the shop as much as we wanted (they service a desalination plant, remember?) but we weren’t sure we would ever be able to get all the red paint out of the brushes we had. 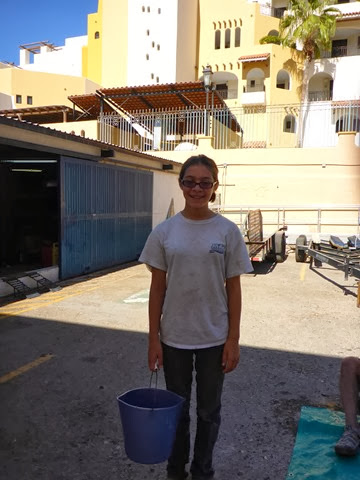 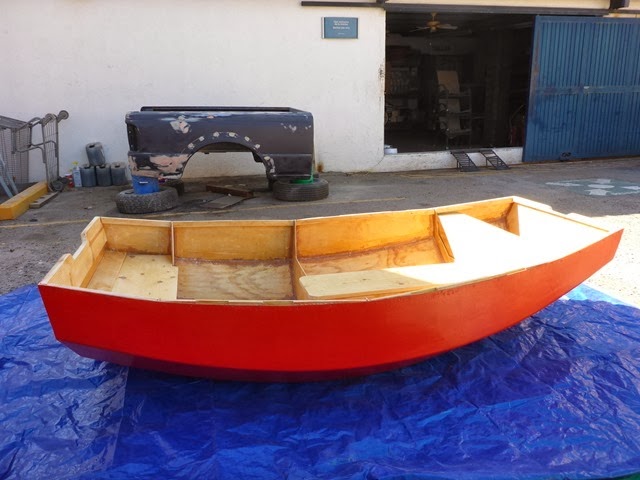 I brought back one larger brush, for the big spaces, and 2 smaller brushes for the tight corners. It seemed like a good idea until I got back and realized our big brush didn’t fit into the can or the cups we were using as paint trays. Bryan thought for a moment, grabbed a pair of scissors, and made me a tray from an old Pepsi bottle. He and Meira came up with the idea for the base, so I could set it down without it rolling away. Perfect! 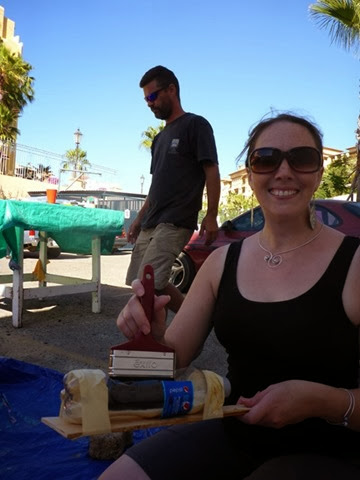 Just as we finished the first interior coat, our friend from the marina showed up to check on our progress. 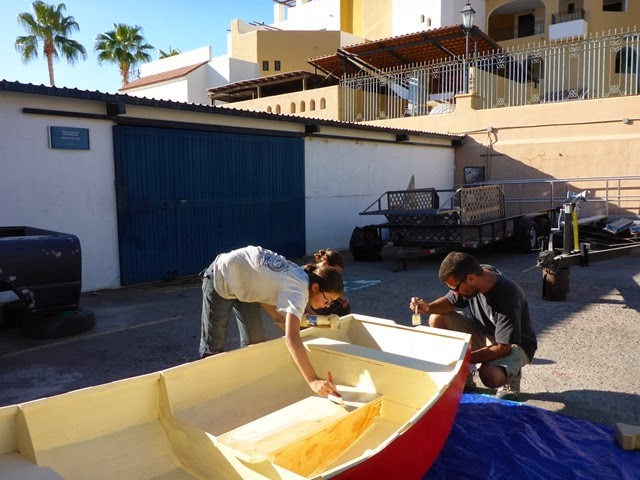 We are so grateful for all he and the rest of the marina staff have done for us. Security, restaurant recommendations, lot space, friendly encouragement—they went above and beyond anything we could have expected. Later in the day, our friend caught me on the sidewalk and handed me tickets to take the girls to see The Hobbit. We’d mentioned that we planned to take them as an early Christmas present/reward for all the hard work and he said he was so inspired by our family dynamic and the girls’ great attitudes, he wanted to help make that happen. (If you’re ever looking for a marina in Cabo…have I got a recommendation for you!) 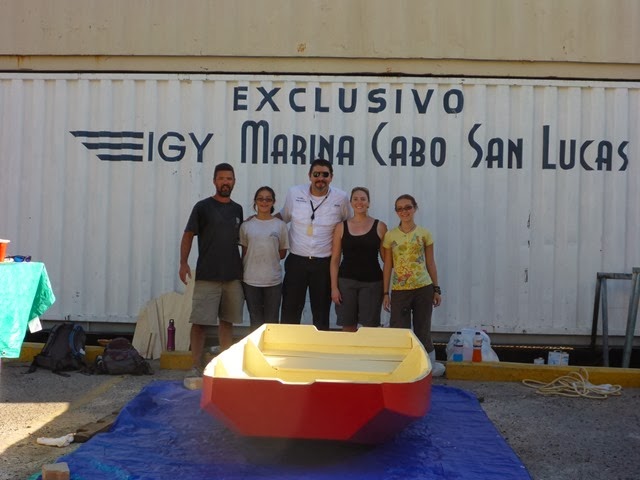 The girls and I headed back to the big boat for a quick break while Bryan picked up our site and hung out near our suddenly vulnerable dinghy. We hadn’t been too worried about security when the boat was half-finished But now, with wet paint surrounding the cable-lock attachment point, we didn’t want to take any chances that we’d lose another tender! (Bryan was only half joking when he said he might sleep there tonight. We left the boat cable-locked to the foundation of the building, though, and there are security guards all around. I think we’re good.)
We met back at the build site about 5pm, hoping to finish the last coat of paint in the daylight. The interior took much more paint the the exterior, so we started by painting the most obvious surfaces and anything that looked really ugly after the first coat. We kept at it, though, scraping the last paint from our cups and the can and had enough left over, Bryan took a few minutes to do this: 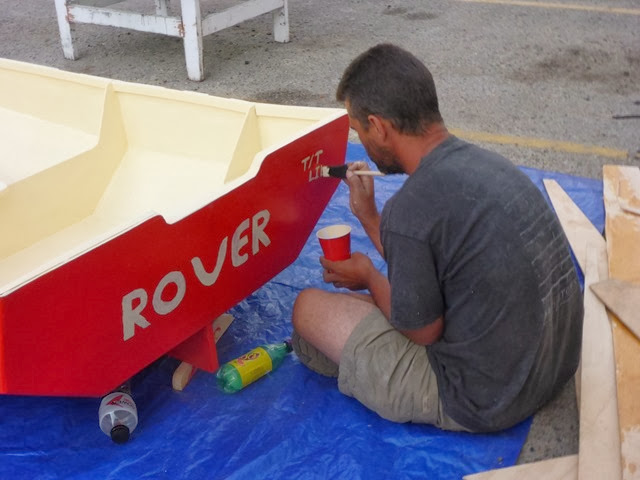 Before we had Splitpea, when we used a borrowed, nameless dinghy, Bryan used the moniker Rover whenever he went to shore alone. “LiLo, this is Rover, over,” he’d call. And he always thought it would be a fun name for a dinghy. 17 years of marriage has taught me that if Bryan ever has a strong opinion about something, I’ll never regret going along with it. Plus, though the girls and I make great crew—hardworking, and up for (almost) anything—there’s no way this boat would have even been considered if it hadn’t been for Bryan, his knowledge, creativity, and chutzpah. The new dinghy definitely belongs to all of us, but I think she may like him best:-) And yes, she’s still a she despite the masculine name. Do I have to explain why we painted her red?
In the celebratory aftermath of finishing the last brushstrokes, Hannah counted days of work. "Five days!" she said. "We beat God!" We reminded her that he had a whole universe to create and she countered by reminding us that he could just speak it into existence; we had to actually work for this creation. We'll call it a draw:-)

Tomorrow, we plan to carry Rover to the boat ramp and row her the few feet to LiLo before heading off to watch The Hobbit. We’re hoping the next day, weather permitting, to tear ourselves away from the people we’ve grown to love and make the 2-day jump to Mazatlan in time for Christmas. I’ll try to post again tomorrow, with pictures of the rope trim and oarlocks installed (“The dinghy’s done,” Bryan says. “The rest of the work is after-market upgrades.”) and maybe a few of the mayhem we cause carrying the boat through town.
I wish you could all be here for the launch. So many of you have helped in so many ways. We’re not oblivious; we know this plan was outrageous and unlikely. But we have felt buoyed up by our community, financially and emotionally, every step of the way. I can hardly believe we pulled it off. Thank you.
Posted by Bethany at 9:58 PM