After we left Crescent City, we had a long day-sail down to Trinidad Head. We’d heard there was good anchorage available there, but pulled in just after sunset to see the anchorage taken over with mooring balls for the seasonal fishermen. Most of the fishing boats have been pulled out for the fall so, after much discussion, we picked an official-looking mooring, tied up for the night, and went to bed, hoping no one came to kick us off in the night. 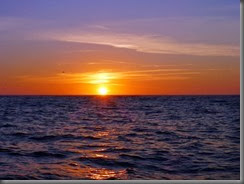 In the morning, we woke to the sound of a work crew hauling moorings up out of the bay. Apparently, they remove the buoys for the winter. We rowed to shore and asked around. No one seemed to know for sure whether we were OK to stay on our mooring but, as one local said, “If you weren’t supposed to be there, someone would have said so already.” We figured the workers wouldn’t get around to our mooring area until later in the week and headed out for a hike up Trinidad Head. 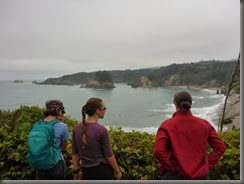 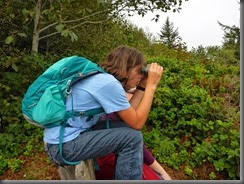 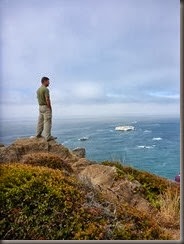 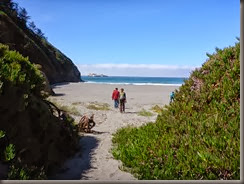 After a nice loop around the head (named Trinidad by the Spanish explorer who first stumbled across this beautiful point on Trinity Sunday) and a few minutes on the beach, we split some delicious fish and chips at the seaside restaurant and rowed back out to the boat where we discovered a swarm of flies were setting up housekeeping. We quickly decided to head on down to Eureka for the night, and had an easy 3 hour motor down the coast. About 5 miles (1 hr) before we hit the entrance we noticed fog starting to settle in around the city. And by the time we reached the vicinity of the jetties, it had settled in so thoroughly, we had less than 1/4 mi. visibility. We could see clearly to the north, and out to sea the sun was setting in a clear blue sky. But the jetty was completely invisible. We eased our way ahead until we spotted the green marker at the end of the north jetty. We tucked into the protected waters and motored through the fog patch to a sparkling clear evening on the bay.
Flocks of cormorants, 100 strong; low-flying pelicans riding the ground effect just inches off the bay; a snowy egret or 2, flashing white in the golden sunset served as Humboldt Bay’s first welcoming committee. The north end of the bay angled east and we curved around into the light of the full harvest moon, rising over the Coast Range. We slowed down to savor the magical evening, slid past a water party—a group of illuminated and exuberant kayakers drifting around the bay—and pulled up to our dock assignment to Humboldt Bay’s second welcoming committee, a couple of fellow cruisers ready to take our lines and help us tie up safely for the night. 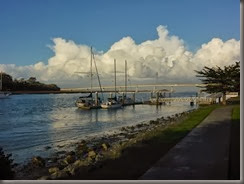