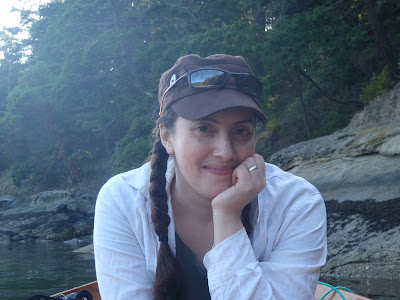 We've been out on LiLo twice already this spring, each trip a gorgeous day of sailing spiked with its own surprises ("What? I thought you packed the blankets!" "Well I thought you packed them!"and "Didn't the marina say the approach to our slip was dredged to 7 ft? Then why is our 4'6" keel stuck to the 7' deep river bottom?") but if you'll pardon the belated tale-telling, I'm going to make sure I have a record of last year's trip before we start making too many memories this year.
Last I checked, we were stuck at Jones Island with a broken engine, not a bad place to be stuck if it's absolutely necessary. In the morning, Bryan sent the girls and me to shore to explore the island while he tried to figure out how to file the points on the distributor cap. One of the previous owners had ominously warned Bryan that he might need to learn this skill at some point and the other owner (his wife) had laughed at the funny-later memory of that fateful trip when she saw more of her husband's backside than his front, as he spent most of the trip upended in the engine compartment. We were so thankful for their experience and especially for the preparations they'd made for future problems--a full point kit, complete with tools and instructions was tucked away in a back locker. 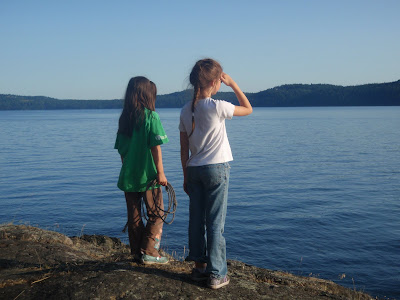 The girls clambered over the logs on the beach while I sat in the sand and read. We finally rowed back to the boat, worried not to have heard the engine, hopeful the problems had been resolved, but either way, hungry. As the companionway steps double as the engine cover, getting down into the cabin was trickier than usual, and there wasn't any place to sit once we did, so we scrounged up some lunch and let Bryan go back to work. Not too much later, he managed to get the engine running again. I was so glad he could finally relax and enjoy the island with the rest of us. 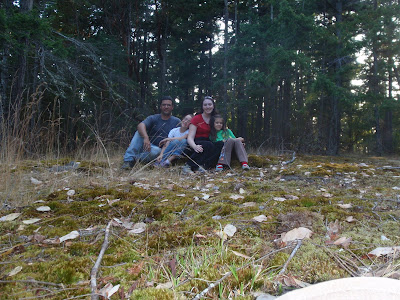 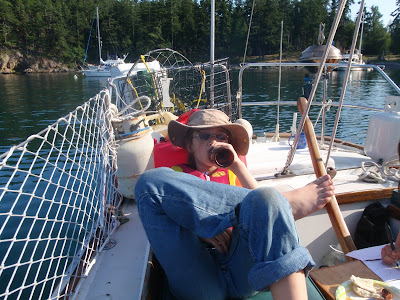 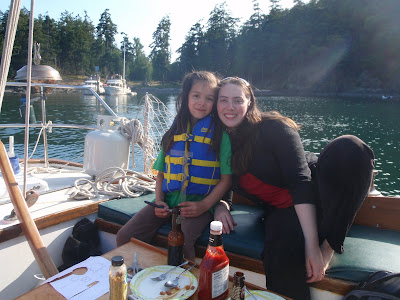 We had dinner in the cockpit and spent another peaceful night before making the dash around the west side of Orcas Island to the small island of Sucia. Several years ago, this crab-shaped island was purchased by a group of marine clubs and later donated to the Washington state for a marine state park. The island's unique shape, with its multiple inlets, and its criss-crossing trails make it a very popular destination for boaters. We were glad to find a spot to anchor in Shallow Bay, on the west side of the island, where we spent a warm and fabulously sunny Saturday. 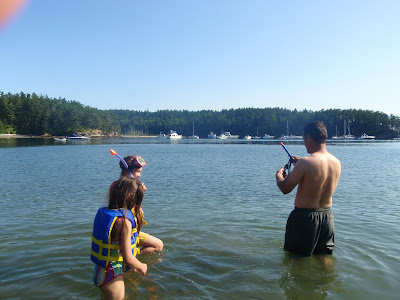 The girls made instant friends with a golden retriever and his owner invited all of us to go for a ride in his Zodiac. I'd forgotten that some boats are made for speed! We had hoped to get a closer look as some of the other bays, and this was such an unexpected and enjoyable way to do it. We left the girls on LiLo and took a row around the bay and, later in the evening, set them off to for a row themselves. They ended up in an informal race with an inflatable dinghy weighed down with passengers and dogs and, despite the inflatable's questionable use of their electric motor, the girls kicked a little dinghy booty. We laughed with pride from the cockpit to hear the other sailors shouting, "You girls rock!" 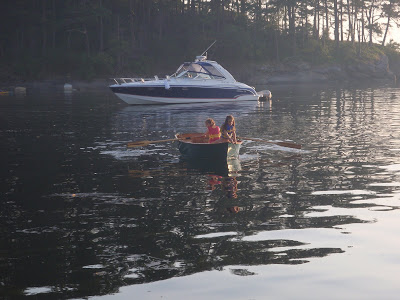 The next day, many of the boats left the bay in the morning, perhaps heading home or just looking for a more protected spot to wait out the incoming weather system. It wasn't a storm, really, but the wind from the east sweeping across the isthmus at the center of the island, conspired with swells from the west to keep our boat turned cross-ways to the chop and we sat inside, out of the drizzle and increasingly miserable until Bryan convinced us to bundle up and go for a hike. We were so grateful for his wise suggestion and for his hard work building us such a sea-worthy dinghy. Even in choppy conditions, Split Pea is such a pleasure to row!
Once we were under the trees, we barely noticed the rain and it cleared off enough for us to do a little more poking around on the sandstone cliffs, famous for sheltering smugglers throughout the years. We stumbled onto a geocache and, according to the instructions, left an object and took an object. Hannah took a beautiful feather and somehow Meira ended up with a black baseball cap labeling her (in sparkling rhinestones, of course) as "High Maintenance." She was convinced that this meant she should do all the repair work above her head and for the rest of the trip tried to help with anything she couldn't reach. We didn't have the heart to explain otherwise. 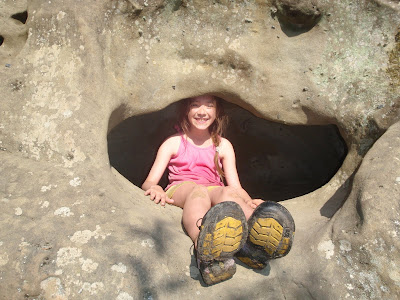 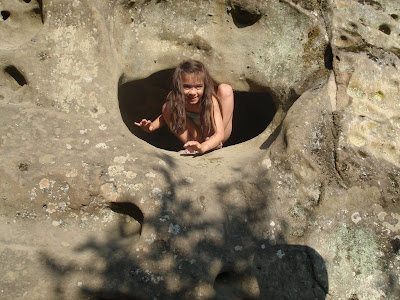 That evening, back on the rolly boat, we debated putting out a stern anchor to hold us stern to the swells. We knew it would make for a more comfortable night, but no one else in the anchorage had one out. Finally, Bryan decided he'd give it a shot. He rowed out and set our stern anchor and immediately we could tell the difference. It was good to have the reminder that we're not the newest or least knowledgeable sailors out there anymore. Though it was a little thing, we both felt a boost to our confidence and a reminder to think for ourselves. We turned in satisfied and eager for the new day. Next stop, Canada! 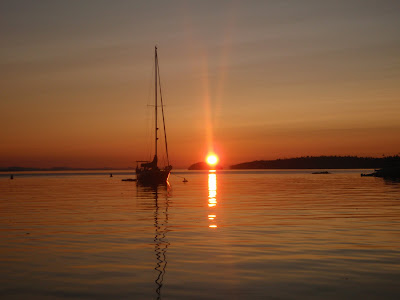