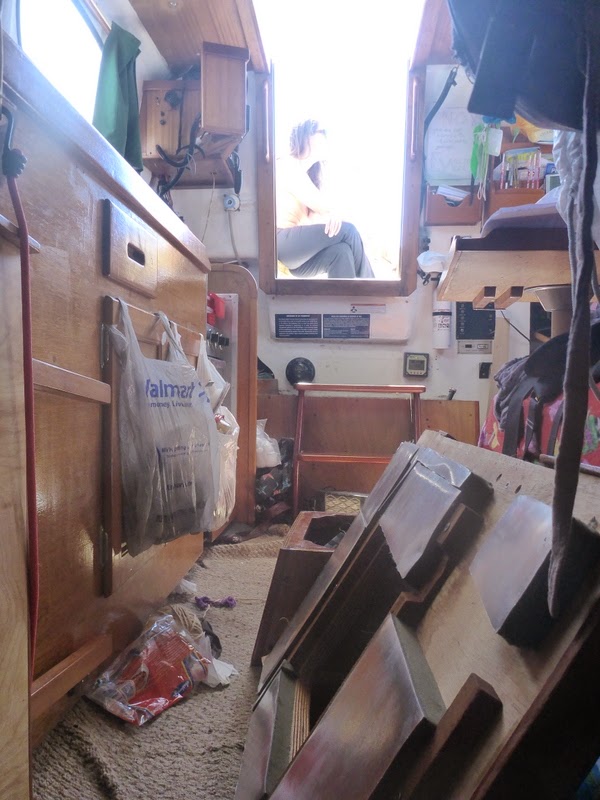 I'm sitting on the dock, trying to stay out of the way while Bryan works on the engine. Again. We came into San Francisco Bay almost 2 weeks ago, celebrated Meira's birthday in San Francisco style, and then, when the weather showed no sign of letting us around Cape Mendocino, headed up into the Sacramento/San Joaquin River Delta for a few days of relaxing interspersed with semi-obsessive weather-checking. 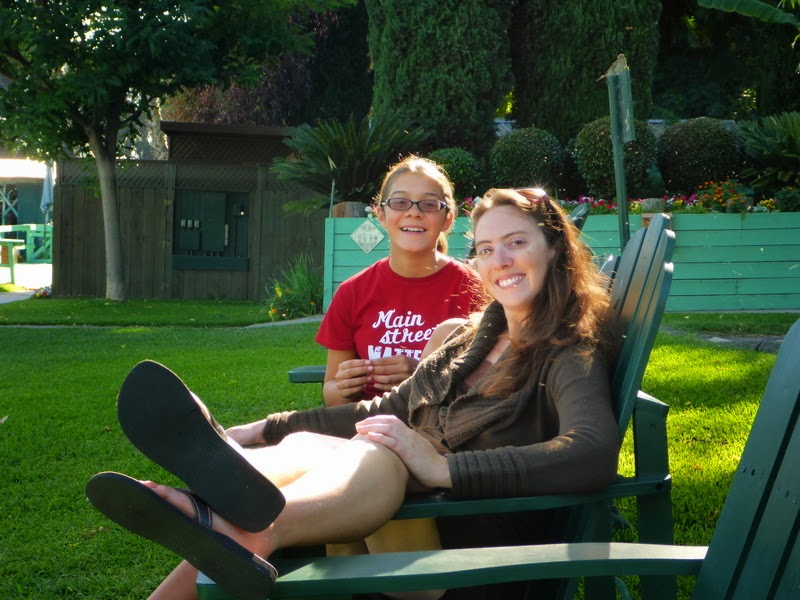 When a tiny weather window seemed possible, we started the bash back down the river. In a boat as slow as ours, you have to time your runs with the ebbing tide and this week, the ebb inconveniently starts running about the time the afternoon headwinds pick up.
Our first day heading back, we made it to the lovely marina in Pittsburg, spent a relaxing afternoon and took off the next day with the tide. 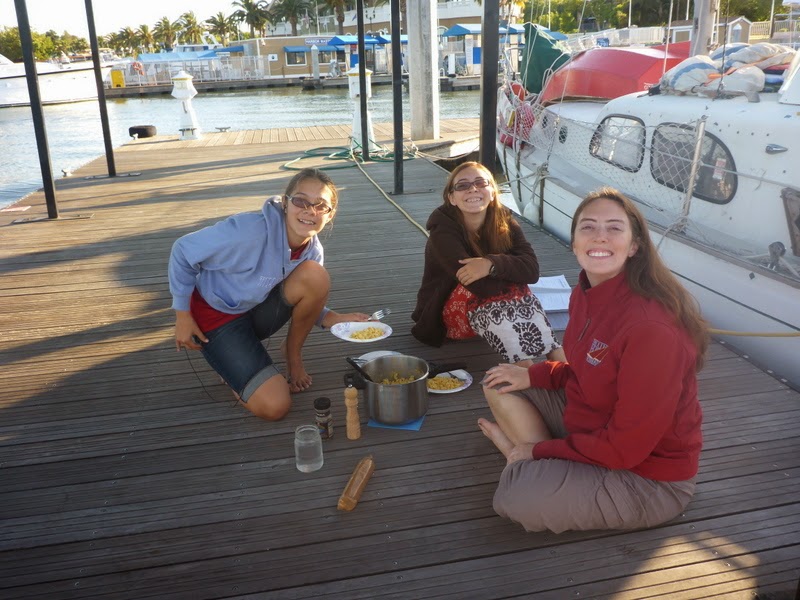 Only a few miles out, our engine coughed and died. Bryan tore into the engine compartment (we might not run Man Overboard drills as often as we should, but we're experts at the clear-the-engine-compartment-and-stand-back sort) and squeezed the priming bulb. Empty. Somewhere in the fuel line, we were sucking in air. While I sailed back upriver, he replaced the priming bulb. This time, the pressure held and we turned back downriver, relieved it was such an easy fix. But only a few minutes later, the engine started coughing again. Again, I sailed with the wind upriver while he upended himself in the engine compartment. He tried something or replaced something else—I don't know; I was sailing!—and we started the motor up again and turned downriver. Soon, it was clear that hadn't been the problem and we sailed back upriver again. This pattern repeated itself all afternoon until he'd exhausted the on-river fix possibilities and I grew bewildered by the repeated change in direction. The channel was narrow, with a shallow area on one side and a military zone on the other, complete with forbidding signage. “Restricted: Explosives”
Every time we turned around, we were in a slightly different place in the river, and I kept the chart handy to remind myself of the hazards, leaning down to check on it in between trying to stay clear of the buoys and spot the next ones.
The ebb tide slacked and the flood began. We wouldn't be going anywhere else tonight. So we turned upriver for good and sailed the few miles back to Pittsburg. Bryan flipped on the ailing engine at the breakwater, but we didn't need it for docking. The crew worked the sheets and lines just right and got us tied up and safe.
Bryan and I walked several miles up the road to the auto parts store for carb cleaner and he spent the evening cleaning and rebuilding the carburetor in a dishpan (so none of the important parts would fall overboard.) When he got everything back together again, it wouldn't start at all. 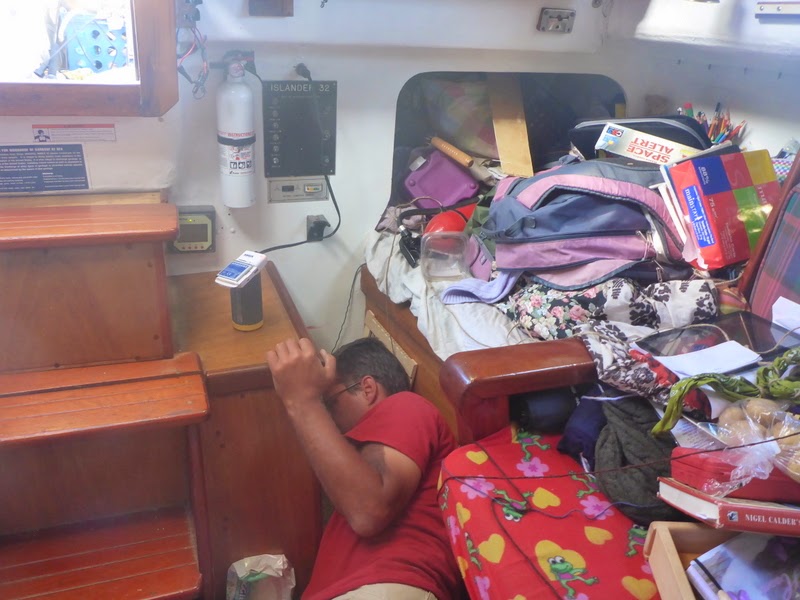 A neighbor noticed us working late and came by to see what was up. We filled him in and he ran back to his boat for ice cream for the girls, chocolate for me, wine for Bryan, and a cruising guide to the Bay. In the midst of trouble, the kindness of strangers.
The next morning, Hannah and I took her last 3 math lessons to town and I wrote and worried while she knocked them out. Bryan and Meira stayed behind and Bryan spent the day working on the engine. By the time Hannah and I got back with cupcakes for an end-of-school celebration, Bryan thought he might have figured out the issue. Next, we orchestrated a mini-rescue. The dishpan had flown away in the breeze and floated, just out of reach near the breakwater. Some passing kayakers took on the challenge and retrieved it for us.
In the evening, Bryan and I left the girls on the boat and went into town for some R&R. When we'd come into town the first time, we'd seen signs for the Pittsburg Culinary Crawl. We didn't expect to still be around when it happened, but we didn't mind too much when it turned out we were. For only $10 per person, we joined a couple hundred locals on a progressive appetizer tour of 6 downtown restaurants. 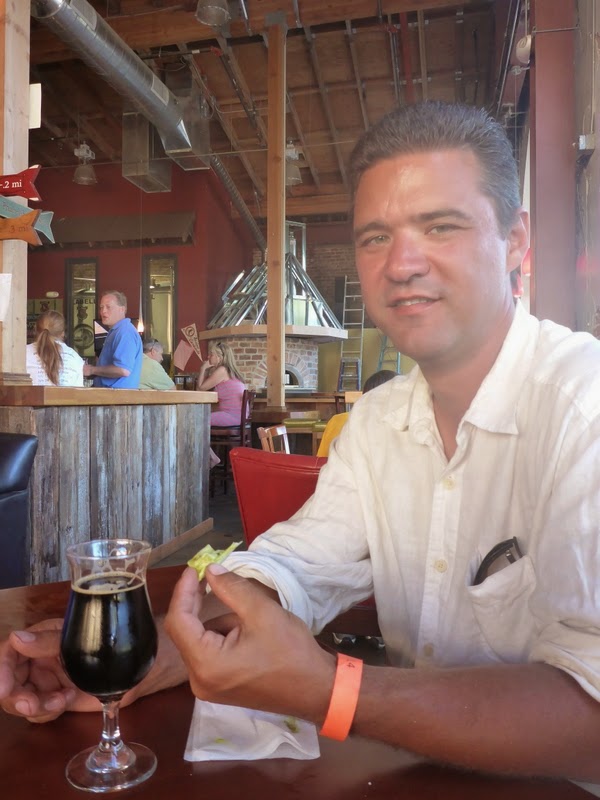 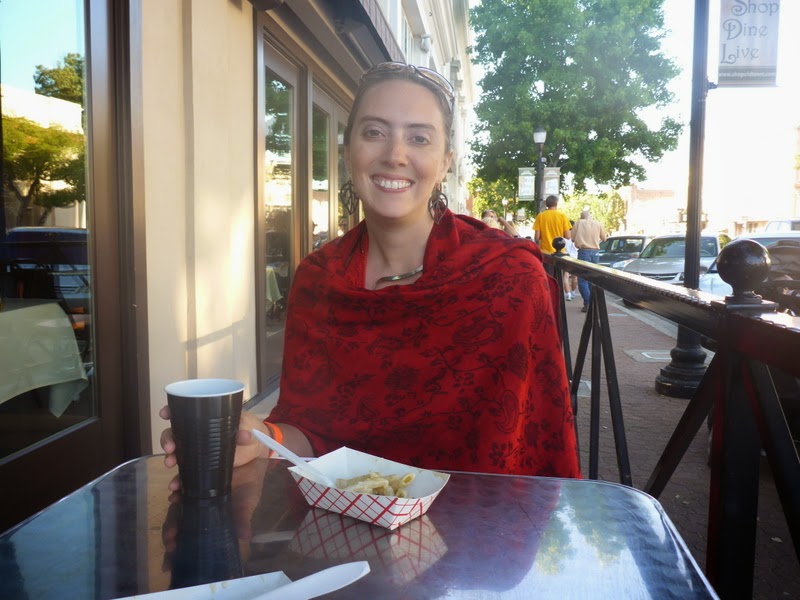 There were free desserts at the local sweet shop, cheap beer and soda at the Mexican place, live music in the park, and a raffle (we crossed our fingers that we wouldn't wind tickets to something we couldn't attend.) 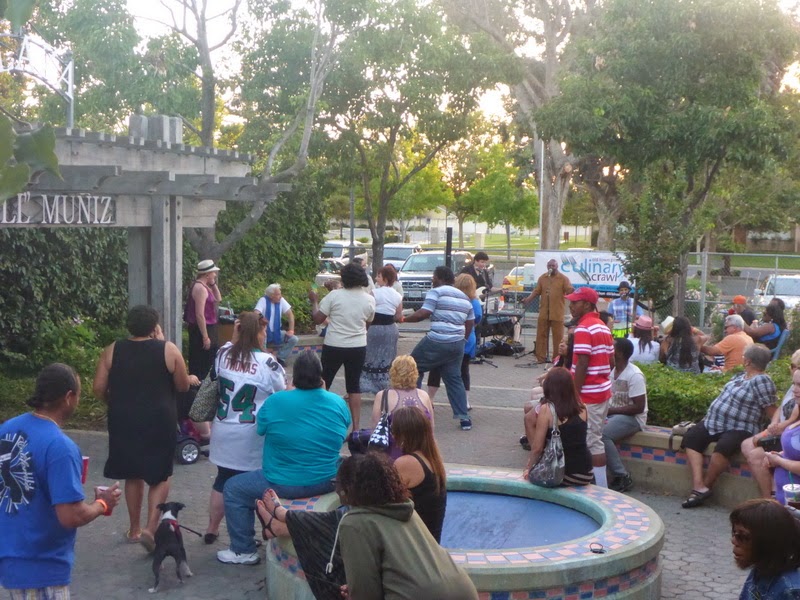 We met many great people, some of whom gave us their phone numbers in case we couldn't get the engine fixed and needed anything.
We left Friday afternoon, hoping to make it a few miles downriver before the flood tide began, hoping to catch the midnight tide across the bar and out to sea. The wind was high and we weren't making very good progress. And then, only a few miles out, the engine died again. So we turned around again. This time Bryan coaxed it into helping us back to “our” slip at the guest dock.
The weather at the cape still looks bad, but there is a small possibility of getting around it late next week if we can sneak our way closer to it during the decent weather near the San Francisco Bay. With every engine issue, this possibility grows less and less likely. We've started checking marina prices and Amtrak schedules.
All along, we've been grateful we broke down here, where moorage is cheap and parts relatively convenient. Some friends of ours got stuck in Bahia Tortugas for 5 weeks trying to get their transmission fixed. But still. The constant uncertainty is starting to wear heavily. One hour we're readying the boat and ourselves for an ocean passage, the next we're living with our house transformed into an auto shop, galley and bunks inaccessible, and the plans for our return on hold again. 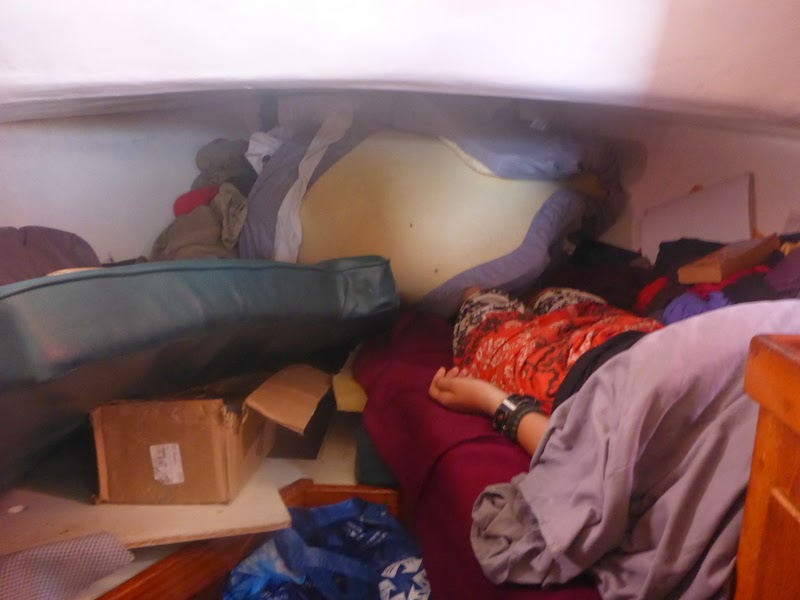 It takes all our flexibility and patience to live with each other under these conditions. No steps to the cockpit, someone always in the way. The engine is in front of the stove and the tools end up everywhere. Stress levels are a little high. 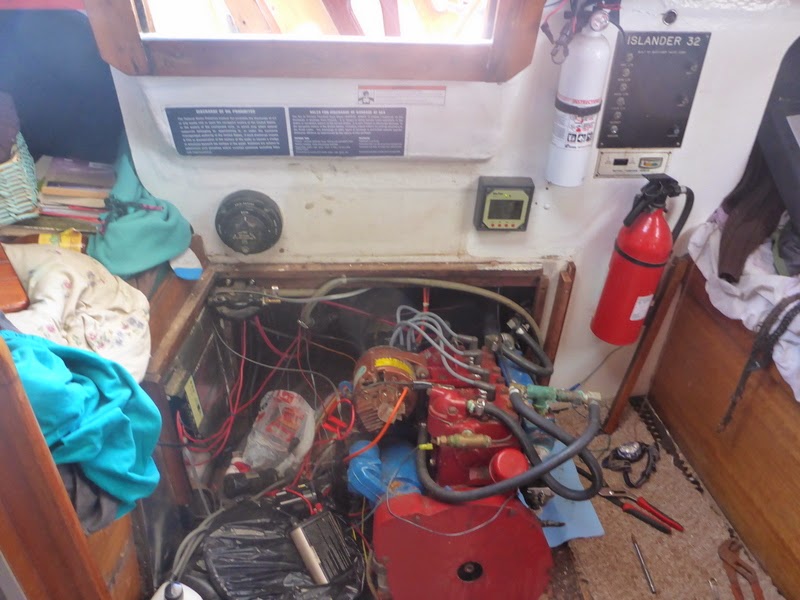 Bryan's company is ready for him to come back. Our renters are moving out. We've looked into the possibility of leaving the boat and coming back in the fall or next spring to get it all the way home. Our friends and family have been encouraging. They don't care how we get home, as long as we're safe. No one but us feels like it would be an anticlimactic way to end our trip. But we're not quite ready to make that call yet.
A few years ago, I drove around downtown Portland with my sister-in-law. We knew where we were going, but we flipped the navigation system on just in case. It tried to send us down the main highway but we took the smaller surface streets to beat the traffic. Its monotone kept interrupting our conversation. “Recalculating,” it said, “recalculating.” After several minutes, we turned down a road that had been closed due to construction. Just then, the long-suffering navigation system gave up. I glanced down at the screen. “Fatal Error,” flashed across the map.
There could be worse problems. We get this. We're safe, healthy, warm, fed. There's even a frozen yogurt shop just up the way. But my brain feels a bit like that GPS. I've recalculated so many times in the last few days, I can feel my energy and drive shutting down. Fatal Error. 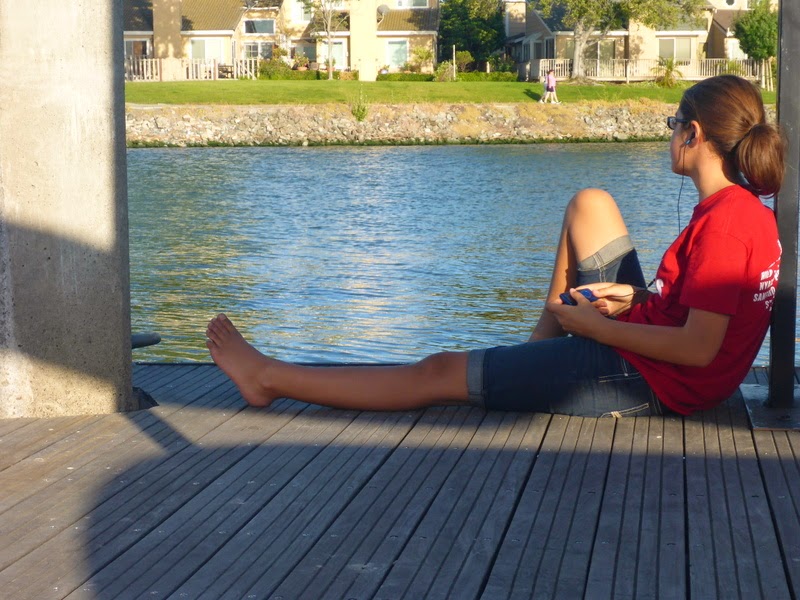 And the whistle on the northbound train echoes across the marina.
Posted by Bethany at 11:04 PM