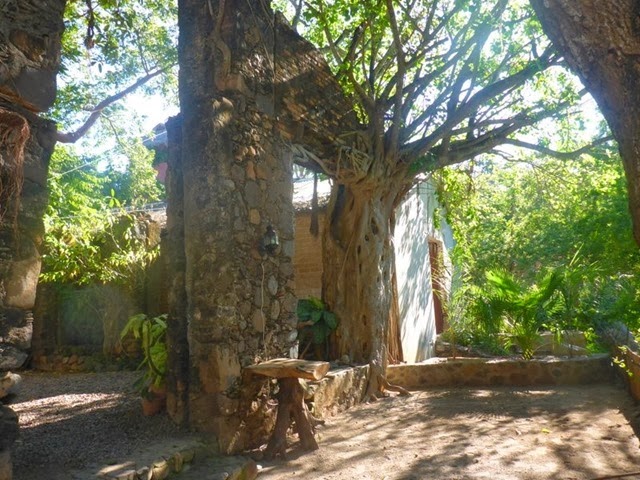 We arrived in Chacala (for the second time) the evening before my birthday. After the adrenaline rush of the ill-fated anchoring died down, we went to shore to find the Moms’ hotel and get some dinner. Their hotel was up the street just a bit, but they had a 3rd floor room with a great view of the bay. 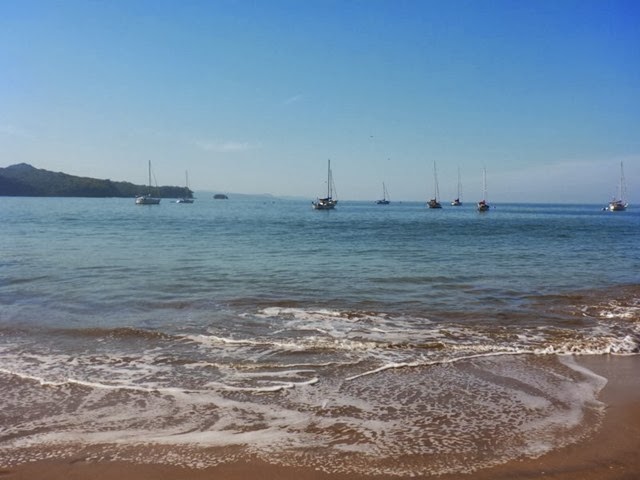 After dinner, they walked back on their own and, at a pre-arranged time, flipped their room light on and off at us to let us know they were in for the night. We flashed our anchor light in return, smiling at the fun of having family nearby. 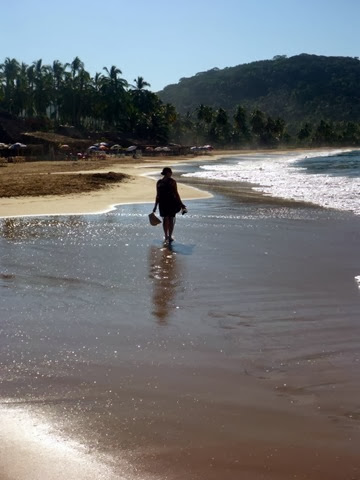 The next day, Bryan and I rowed into shore for breakfast out—my favorite!—and then he left me alone for a few minutes to row back for the girls. 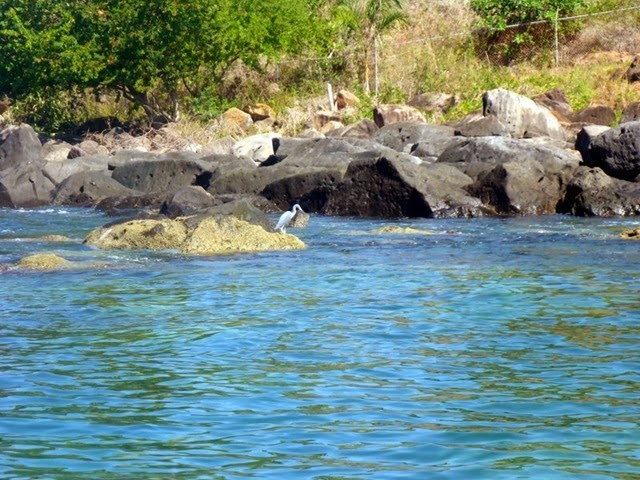 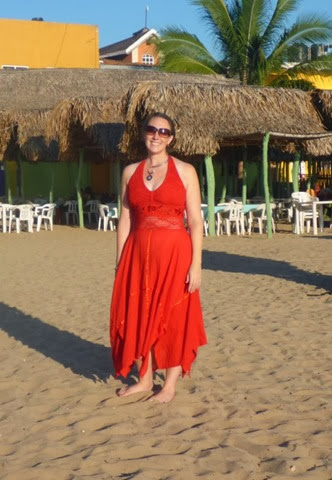 I've always secretly admired the people who don’t want a big deal made of their birthday. It seems more refined and sophisticated somehow. I don't want a big deal made, but I’ve always liked an excuse to have a get-together, so I was overjoyed to see that our friend, Will (who we met in California and spent Christmas with in Mazatlan), was in the bay, along with David and Carolyn from CrazyLove. I issued what may be my favorite birthday invitation ever—“Meet me on the beach at noon for a birthday celebration!” 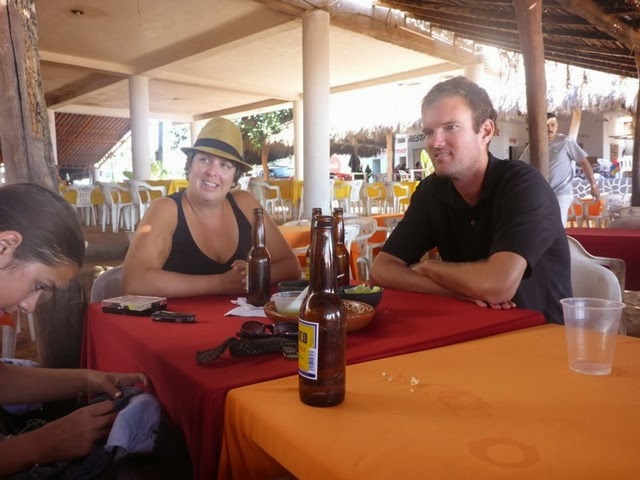 We’d met David and Carolyn in Bahia Santa Maria, the night we lost our dinghy, and they were aboard the next night for the excitement of chasing down Will’s dinghy. They’d planned to sail straight from Baja across to Manzanillo (quite a ways south of here), but got re-directed by some heavy weather and pulled into the Banderas Bay area instead. I’m sure we could have found a lovely way to celebrate alone in a remote anchorage. But I certainly enjoyed meeting everyone for lunch and it looked to me like everyone agreed. 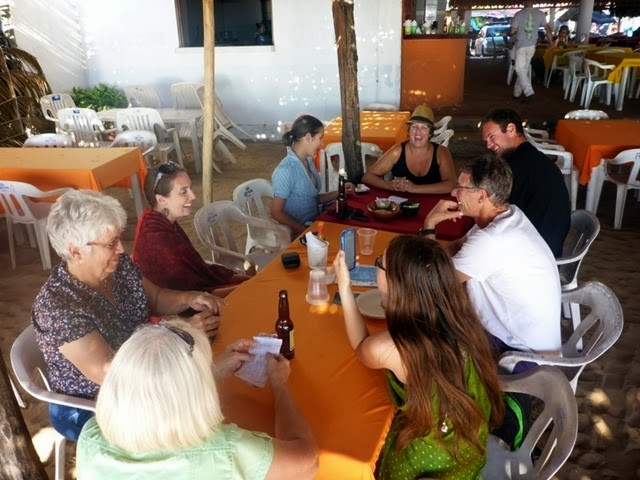 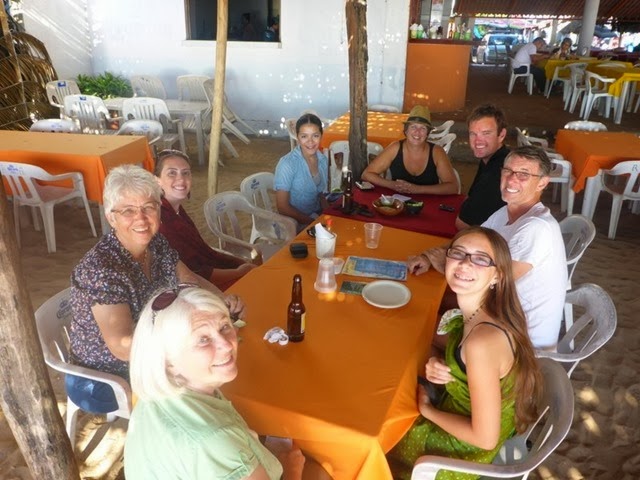 At some point during the day, Meira wangled permission to row back to the boat by herself for some forgotten thing. She hauled the boat down from the high-tide line, launched it herself and, rowed across while Bryan watched from the beach. 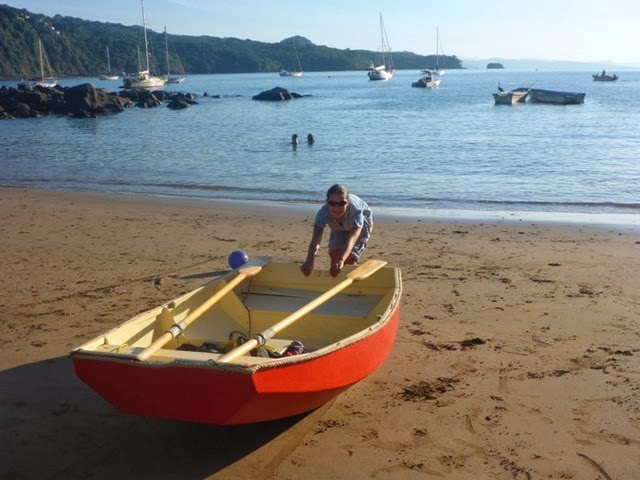 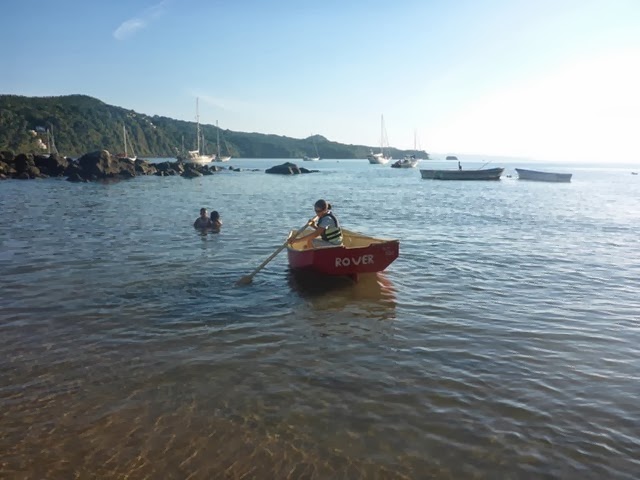 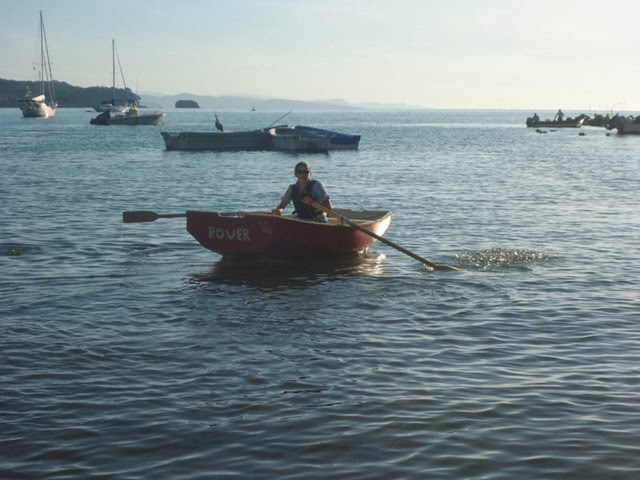 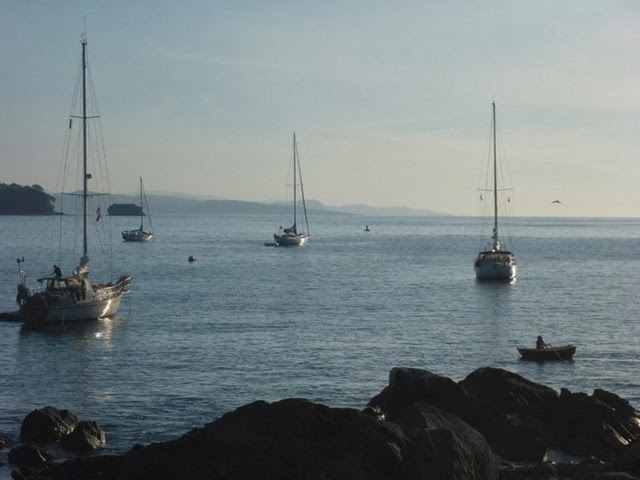 After lunch, we moved a couple of yards down the beach to a café/restaurant that was open a little later than our lunch spot. We ordered frappuccinos all around and sat and talked until the sun went down. 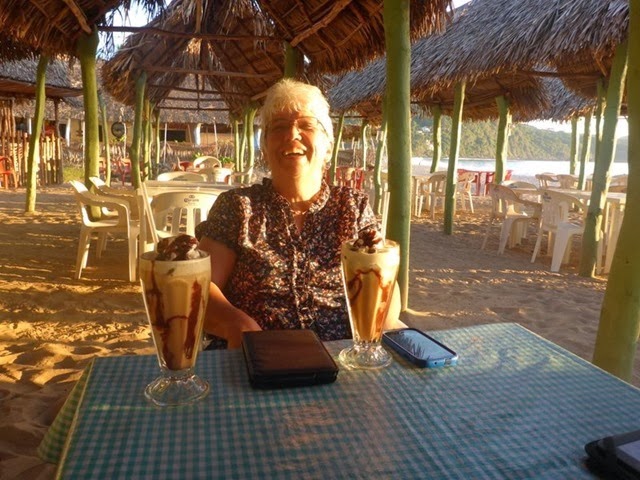 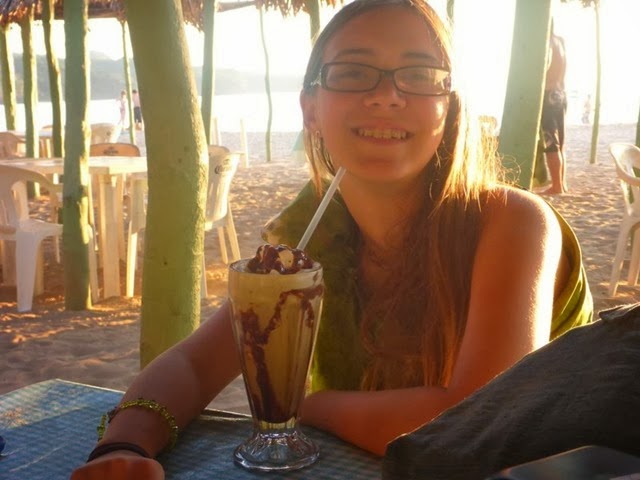 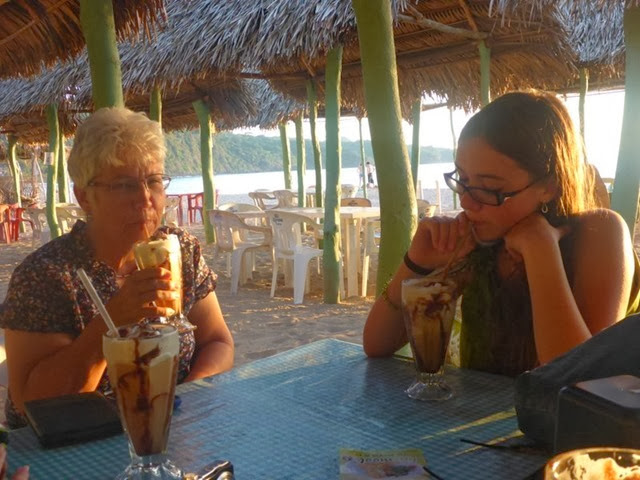 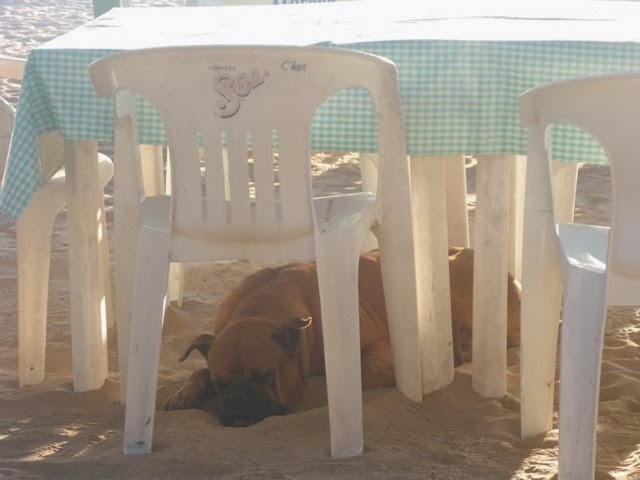 In the evening, Bryan figured out how to order me tea with milk and sugar, just the way I like it. 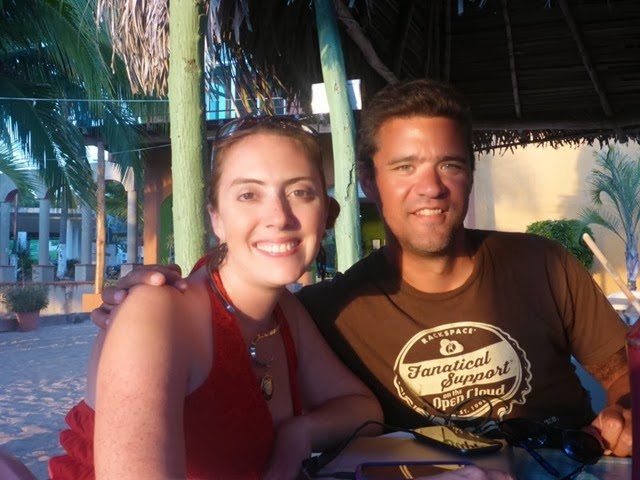 And I used the up-and-down internet access to make a few birthday calls home. 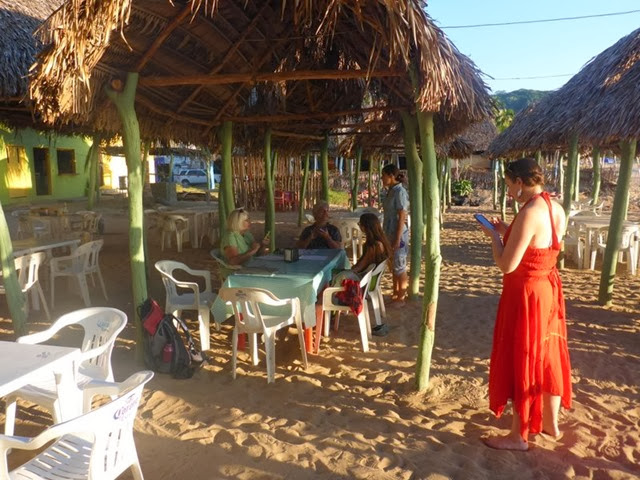 I specifically didn’t tell the restaurant that it was my birthday. I didn’t want them to think I was trying to get anything out of them. But as we paid the check, I told Jorge, our attentive waiter, how thankful I was for all he had done to make the day special. Before we could gather our things and leave, he brought out an elegant dessert platter and lit the candle with a flourish. The girls helped me polish off the decadent brownie, berries, and panna cotta. And I don’t think we even got wet on the dinghy row back. Especially for someone who’s only ever celebrated her January birthday in the Pacific NW or Alaska, it was a pretty fabulous way to spend a birthday! 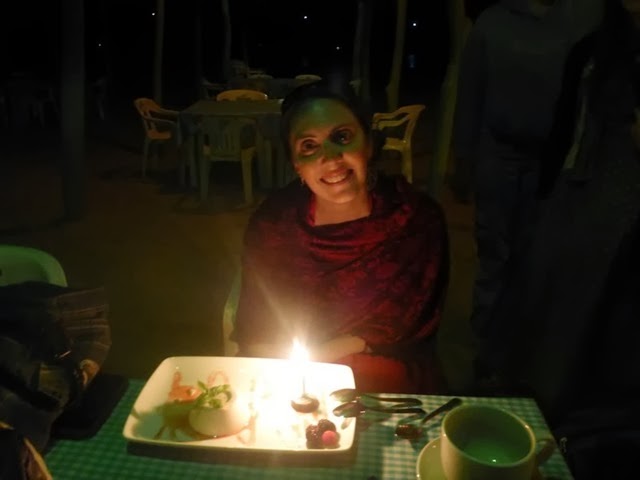