My silence on this blog does not reflect a lack of notable events in my life. Surprisingly, it does not even reflect a lack of writing. I have just been writing for other venues, so I will now be flooding you with posts cut-and-pasted from other places on my hard drive and augmented with pictures. Here's the first, some pictures from a sailing trip earlier this year and the log from the first day. 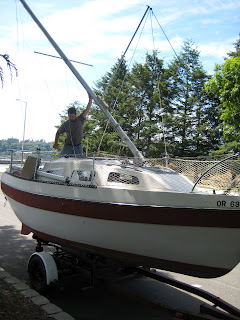 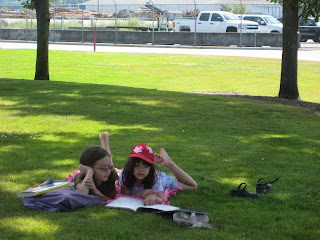 July 5, 2007
We arrived in Olympia after a busy morning of packing and a drive up to Washington in the beautiful weather.
While Bryan put up the mast, Hannah and Meira sat in the shade and looked at books. Bryan's mast system has been revised several times over the last few years and he is now able to safely raise or lower the mast without assistance in just 15 minutes.
We loaded the boat, inflated the dinghy, and were ready to go. However, the tide was too low to allow us to launch, so we used the time to relax with cold drinks and locate some ice.
We finally launched without any more trouble about 6:15 PM. After navigating the channel out of Swantown Marina (in the East bay of Budd Inlet) we came upon a large sailboat race-probably more than 20 boats-and had to sail on the outside of the channel markers to stay out of the way.
We had planned to stay in Filucy Bay or Tolmie State Park that night, but due to the late start and our low fuel supply, we decided to stay in Boston Harbor. The guest moorage was full for the night, so we anchored out near the mooring field west of the marina. By now, we were all ready for homemade clam chowder; we ate a whole pot!
The next morning, as we sat at anchor, some kayakers paddled by. Hannah called out, "How are you?" and before they could answer, Meira yelled, "Good!"
We stopped by the fuel dock as we left and walked to the marina for a few minutes to stretch our legs. The girls were fascinated by the "fried egg" jellyfish and the marina employees filleting fish near the marina store. 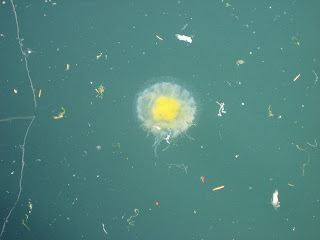 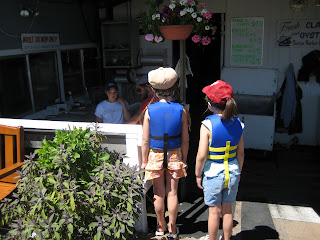 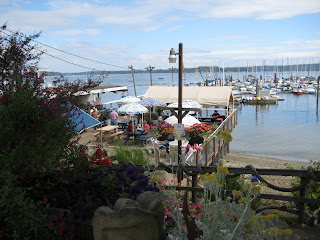